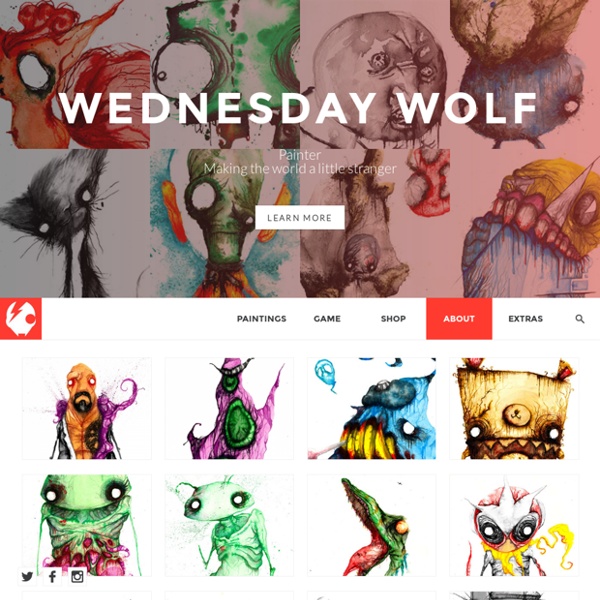 QuiBids - Shopping Redefined Tiny Mechanical Insects Made of Watch Parts Chicago-based artist Justin Gershenson-Gates, aka A Mechanical Mind, creates tiny steampunk insects by carefully soldering together gears, springs, and other watch parts. The mechanical bugs, many of which Gershenson-Gates can balance on just his pinky finger, are miniature, multi-legged creatures that each take the artist several hours to complete. Like a robotic army of creepy crawlers, the metallic mites invoke a sense of mechanical technology come to life. There's something altogether exciting, intriguing, and frightening about the collection that screams "science fiction horror film." A number of Gershenson-Gates' mechanical insect sculptures are available to purchase through his Etsy shop. Justin Gershenson-Gates website via [from89]

Incredible sock paintings What happens with all the monsters that hide each night under our beds? Well, when the sunlight hits all the bedrooms in the world, these colorful creatures travel long distances and snug in Aaron Johnson’s paintings. “‘As I stare at this painting, it stares back at me, and as I stand here in my two socks, so does the painting hang there in its many socks,’” Johnson replayed for “Huffington Post Arts”. “That seemed absolutely absurd, and therein somehow startlingly profound.” Even though the paintings respect some guidelines in the means of sizing and proportion, when it comes to texture things literally go to the extreme. Johnson believes that the socks still keep the energy and the spirituality of the owners, thing that brings life into his all of the designer’s work. Photo source www.huffingtonpost.com

Drawing Autism Drawing Autism is an incredible collection of artwork by people diagnosed with autism, from teenage amateurs to established artists. Unlike many of the books I feature on 50 Watts, this one is in print. You should buy it. [Amazon link to the new reprint which comes out April 2, 2014 from Akashic.] This post features a small selection of my favorite images from the book, along with some quotes by the artists. Publisher's description: Over the last decade autism spectrum disorder (ASD) has become an international topic of conversation, knowing no racial, ethnic, or social barriers. Donna Williams, The Outsider What was the inspiration for this piece? "The Outsider" is about joining in from the periphery. An excerpt from the artist's answer to the question, "At what age did the act of creating art enter into your life? I was deeply mesmerized with all things aesthetic and sensory from at least 6 months of age. Felix: Imaginary City Map, Age 11 What was the inspiration for this piece None. D.

Фото и рисунки, арт и креативная реклама TetraBox Light by Ed Chew Liquid to Light Designer Ed Chew takes a green step in the right direction with the TetraBox lamp, a light object made from discarded drink packets that would have otherwise ended up in landfills already packed to the brim. The design is achieved by unfolding the packets and refolding them into hexagonal and pentagonal sections that are then pieced together to form a geodesic sphere or any other desired shape. Here, the Epcot-like ball makes an attractive overhead light and casts an impressive web of shadows and shapes on the surrounding space. Designer: Ed Chew Hyper Realistic Illustrations Art & Design We already showed Dan Luvisi's version of Bert and Ernie on our Facebook Page. Finally, we found the complete Popped Culture series with some too realistic illustrations of Mike Wazowski from Monster and Co,Donald Duck and Cookie Monster.

Illustration and Animation Work by Noper Radu Pop aka Noper is a talented and successful Romanian illustrator with a thing for animation. He currently lives in Bucharest and works as an Art Director with an advertising agency. In his early carreer he often found himslef juggling with various illustration styles and media, but his more mature work clearly underlines his passion to create bizarre characters and surreal worlds. His final works are ellaborated, with a dark feel about them. He never plans or sketches a drawing, but prefers to pump every bit of his spontaneous creativity on any type of canvas he has in front: a piece of paper, a tablet, a wall or a napkin. Noper has worked for famous clients and was included in “Luerzer’s Archive: 200 Best Illustrators Worldwide 2009/10“.