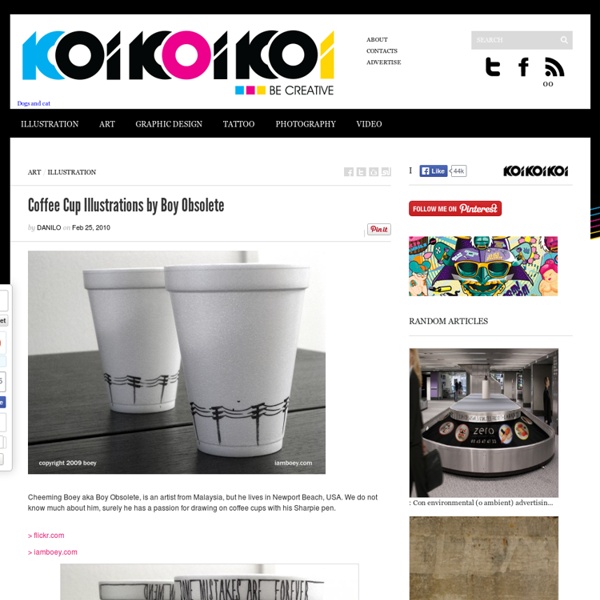 Dessins au crayon et illusion de relief - Ramon Bruin Most of these drawings by Ramon Bruin seem relatively simple, but at the same time, because of their shadows and some intriguingly placed real-life props in the photographs, the sketched images appear to be almost magically leaving the bounds of the paper they’re drawn on… (via My Modern Met) Extraordinary

Sculpture sur Papier - Calvin Nicholls It was only a matter of time before Calvin Nicholls' life-long passion in art and wildlife combined! The Canadian has been a full-time paper sculpture artist since the mid-1980's. With such a variety of animals in his collection, he's essentially created his own paper zoo. Many of the animal paper sculptures belong in Nicholls' most extensive collection, which includes over 75 pieces for Follett Library Resources in McHenry Illinois. The series began in the mid-1990's and continues to this day. "Initially a rigid form is constructed which establishes the contours of the subject and provides a stable base upon which the detail pieces are attached," Nicholls' says, as he explains his process. Calvin Nicholls' website

AMS Design Blog: Artist Showcase : Illustrations by Anton Semenov I have been wanting to share Anton’s work for some time and am happy to have found the time to finally do it. Anton is a Russian artist who does the most amazing digital artworks. It’s not so much his technique (which is very good) but his subject matters that I love. His work is very creepy and unsettling, with a very dark edge that reminds me of films like Pan’s Labyrinth and Alien. You can see more of his work over here. Sculptures en crayons - Jennifer Maestre When we are talking about pencil, what would you relate to? Maybe you would think about writing or drawing, but there is an artist who really thinks out of the box. She is Jennifer Maestre, a sculptor. Jennifer was born in Johannesburg, South Africa, but finished her B.A. in Wellesley College, U.S.. She later gained her B.F.A. in Massachusetts College of Art. Jennifer’s sculptures were inspired by the form and function of the sea urchin. The following are some amazing sculptures of Jennifer we selected.

Imp Head Color 1 Ten Stone Tea was a bit of an adventure for me. I had been feeling artistically weighed down with a seemingly endless parade of freelance jobs not to mention my full time, nine to five job. After I finally got a little bit of time for myself I decided that to keep myself fresh and to recharge my batteries I would do a painting just for me. To tell you the God's honest truth I wasn't really sure of what to paint when I started and frankly most of the elements in this painting are stuff I put in on the fly. I would also like to note I was so enamoured with the method and the style of this painting I decided this would only be the very first in a long series of paintings that I will at some future date collect into a book and publish.

Powerful and Creative Ads Great series of creative and powerful ads… Clever Ads Billboard Paper Art - Elsa Mora Artwork and Photography © Elsa Mora ↓ Links to other galleries: *Artist’s Books *Mixed Media *Painting *Editorial *Drawing *Jewelry *Photography Underlined Book Quotes Become Clever Illustrations Bookworm or not, you can't help but enjoy these black and white illustrations of literary quotes by Evan Robertson. The New York-based graphic designer has taken some of the cleverest lines written by famous authors such as William Faulkner and Oscar Wilde and turned them into wonderful posters. These literature-inspired fine art illustrations are currently being sold on Etsy under the name Obvious State. Robertson would see a "little jewel of a sentence" and he'd underline it. Then, he would take those "snippets of text and ideas" and "let the words be a springboard for an illustration." Here are 12 of our favorites. Update: Check out more clever illustrations in Part II of this story. Obvious State on Etsy via [Quipsologies], [Huffington Post]

Lieux de tous les jours sous dessins ajourés - Shamekh Bluwi Shamekh Bluwi, an Ammam, Jordan-based illustrator and architect, is creating a striking series of photographs that feature paper cutouts of women whose dresses can become literally anything… Shamekh’s sketches are completed with the patterns and scenery he encounters in his everyday life — From beautiful tiles… To intricate mosaics… To cityscapes… And natural textures. All photos via: Shamekh’s Instagram The results are not only totally unique, but they’re also absolutely stunning!