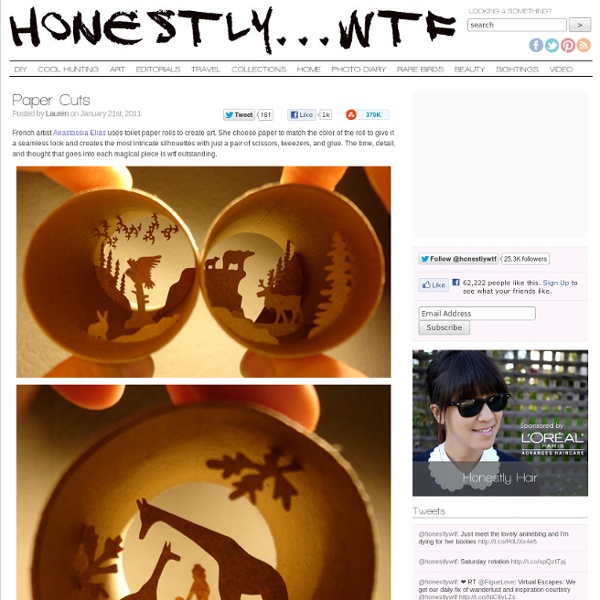 Izziyana Suhaimi We’ve been seeing a lot of embroidered art as of late but I must say that so far, I’ve been most impressed by Singaporean artist Izziyana Suhaimi‘s work. I can’t get over how skillfully she is able […] A Due Colore I still can’t get over how Alberto Seveso can make something as simple as ink in water look so captivating. Each photo, in his latest series, captures duos of vibrant pigments, entwining in the most breathtaking […]

Books transformed into visual art Origami artists have been transforming paper into varied, visually striking works of art since centuries. However, an entirely different wagon of artists has stretched it across the paper and is creating the same magic with books. Had these books not been morphed into unusual artworks, you might have seen them bedecking some landfill, a ditch or a waste-bin. Who knows? Anyhow, after passing through some skilled hands, they have gotten more appealing than they were ever. Welcome to Adobe GoLive 6 From Los Angeles Times: It's not all about you Chances are, others aren't judging you as harshly as you think, if at all. By Benedict Carey Times Staff Writer January 13, 2003 Paper Art Paper art can be traced back to Japan, where it originated over a thousand years ago. From complex paper cutting to book carving, this is an ever expanding area of design that is hardly talked about. These intricate paper designs grace museums and exauhibitions throughout the world and is becoming yet another exciting medium of expression for many designers. Some of the artists featured here use simple materials, such as A4 printing papeel, while others resort to unexpected materials, such as actual books, as their prime materials.

Zoomdoggle: More fun than work! (Every week, Zoomdoggleâ€™s latest contributor spills the beans on how to inflate tasty treats into giant sweets. First up, yummi bears). Word on the street is, Zoomdoggle’s got a bit of a crush on Gummi Bears. Ready to pimp those cub-sized bites? All it takes is a bag or two, a melting pot, and a honey bear to make them hulk-out. The pictures tell the story. Charles Clary – Paper Extravaganza Amazing detailed paper installations created by Charles Clary made out of all hand-cut paper. (via society6) Coolest Inventions Now days ~ Chulbulle.com Funny Pics : Hot Pictures Anonymous Says: June 11, 2011 6:53 PM They are truly unique. Anonymous Says: June 12, 2011 2:08 PM

Marking Your Territory If you're starting your garden from seeds this year, you'll need to have some markers in place to help you remember which sprouts are which, right? We are absolutely loving these charming DIY rock garden markers featured on Lu Bird Baby! To make your own homemade markers, simply pull out your handy paints and put your pint-sized Picassos to work on coloring in all of the veggies and fruits that you're planning on featuring in this year's family plot. Such a simple project, and yet one that you can use in years to come! Matthew Cusick - Map Works I seek images that don't exist Map works by Matthew Cusick Title: Adam Zagajewski Lines from "The Room I Work In," translated from the Polish by Clare Cavanagh: Twin One - Knife & Fork Chopstick by DesignWright for Lékué When a Knife and Fork Get Together… I spent several minutes staring at the Twin One knife and fork companion set. It’s a nice modern design by Adrian and Jeremy Wright (omg are you guys brothers?). Minimal, appears well balanced and definitely made for durability thanks to the nylon and over moulded rubber but the “awesomist” feature is the two can connect to form a sort of spring-loaded chopstick. I WANT ONE just to try it out. How about it guys?