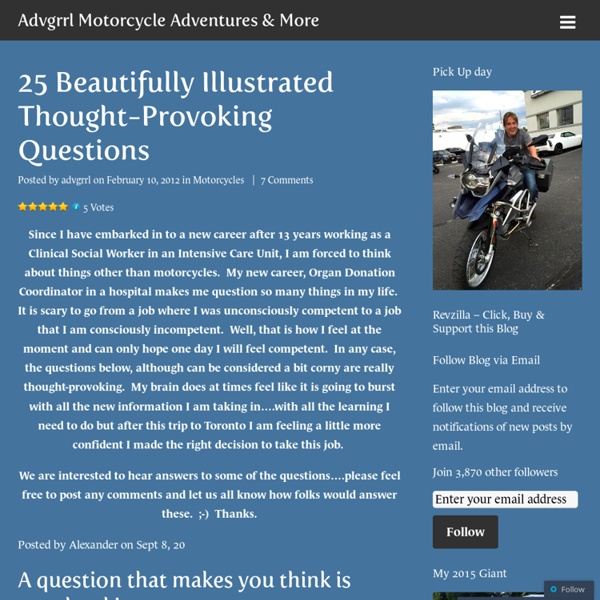 Since I have embarked in to a new career after 13 years working as a Clinical Social Worker in an Intensive Care Unit, I am forced to think about things other than motorcycles. My new career, Organ Donation Coordinator in a hospital makes me question so many things in my life. It is scary to go from a job where I was unconsciously competent to a job that I am consciously incompetent. Well, that is how I feel at the moment and can only hope one day I will feel competent. In any case, the questions below, although can be considered a bit corny are really thought-provoking. My brain does at times feel like it is going to burst with all the new information I am taking in….with all the learning I need to do but after this trip to Toronto I am feeling a little more confident I made the right decision to take this job. We are interested to hear answers to some of the questions….please feel free to post any comments and let us all know how folks would answer these. ;-) Thanks. Like this: In "BC" Related:  11 PHILOSOPHY • Life, Love, and Happiness

The Holstee Manifesto Original Letterpress Poster Goods bought from Holstee are meant to make you smile. If they don't, we haven't done something right. If you're not completely satisfied with your Holstee purchase, let us know! The easiest way to initiate a return is to first fill out this form. You are also welcome to contact us at help@holstee.com with questions or if your return/exchange requires special attention. Our return policy is: If you don't want it, send it back within 14 days of your purchase for a full refund and within 30 days of your purchase for an exchange. What if my product arrives damaged? Here at Holstee, keep in mind we offer a lifetime warranty on our designed goods--if they don't meet your quality standards, let us know and we will fix or replace it. Have a question that we didn't answer?

CHILDHOOD BRAIN MODIFICATION: Do This Now Suck a paperclip up your nose! This one's from Jim Burrows Get a medium-small rubberband and a paperclip. Put the rubberband around your palm and the back of your hand. Thread the paperclip onto the band, then hold the paperclip between thumb and forefinger. If you let it go, the paperclip should instantly snap back, vanishing from sight. OK, now hold the paperclip again, draw attention to yourself. LORD OF THE GNATS On NPR "Livng on Earth", an entemologist mentioned that swarms of gnats will move towards anything that emits the low humming sound of female gnat wings. LORD OF THE ANTS A stream of ants invaded my workbench. TWO-LAYER COLA Diet drinks will float on full-sugar drinks, but only if you add a layer of crushed ice to disrupt the flow from the spigot. PENNY CYCLOTRON ACCELERATOR I had a big potato-chip bowl. Dare to be Different Besides daring to sing loudly where others can hear, have you ever dared to "think out loud" in public? LOBSTER BOY! PROPER CLAPPING Clap normally.

Twenty Arguments For The Existence Of God by Peter Kreeft & Ronald K. Tacelli In this section you will find arguments of many different kinds for the existence of God. And we make to you, the reader, an initial appeal. We realize that many people, both believers and nonbelievers, doubt that God's existence can be demonstrated or even argued about. You may be one of them. You may in fact have a fairly settled view that it cannot be argued about. But no one can reasonably doubt that attention to these arguments has its place in any book on apologetics. They have also believed that an effective rational argument for God's existence is an important first step in opening the mind to the possibility of faith—in clearing some of the roadblocks and rubble that prevent people from taking the idea of divine revelation seriously. It is this sort of cramped and constricted horizon that the proofs presented in this chapter are trying to expand. You may not feel that they are particularly valuable to you. A word about the organization of the arguments. 1. 2. 3. 4. 5. 6. 7.

Mind-Blowing Story: “Talking to God…” I met god the other day. I know what you’re thinking. How the hell did you know it was god? Well, I’ll explain as we go along, but basically he convinced me by having all, and I do mean ALL, the answers. Which is odd, because I’m still an atheist and we even agree on that! It all started on the 8.20 back from Paddington. What did he look like? Well not what you might have expected that’s for sure. ‘Anyone sitting here?’ ‘Help yourself’ I replied. Sits down, relaxes, I ignore and back to the correspondence on genetic foods entering the food chain… Train pulls out and a few minutes later he speaks. ‘Can I ask you a question?’ Fighting to restrain my left eyebrow I replied ‘Yes’ in a tone which was intended to convey that I might not mind one question, and possibly a supplementary, but I really wasn’t in the mood for a conversation. .. ‘Why don’t you believe in god?’ The Bastard! I love this kind of conversation and can rabbit on for hours about the nonsense of theist beliefs. ‘Who am I?’ ‘Stottle.

The Neuroscience of Imagination Albert Einstein said of the theory of relativity, "I thought of it while riding my bicycle." Anyone who exercises regularly knows that your thinking process changes when you are walking, jogging, biking, swimming, riding the elliptical trainer, etc. New ideas tend to bubble up and crystallize when you are inside the aerobic zone. Aerobic exercise clears the cobwebs from your mind and gives you access to insights that are out of reach when you are sedentary. What is happening to the electrical, chemical and architectural environment of our brains when we exercise that stimulates our imagination and makes us more creative? Many scientists believe that the creative process springs as much from the subconscious as it does from a conscious thought process. In an essay from 1911 called William James said, "when you are making your general [creative] resolutions and deciding on your plans of campaign, keep them out of the details. The creative process moves through five stages.

PACTISS – Philosophers and Critical Thinkers in Senior Schools: Resources for Educators | Download what you need. Future | Timeline | Technology | Predictions | Events | 2010 | 2012 | 2015 | 2020 | 2050 | 2100 | 21st century | 22nd century | 23rd century British forces withdraw from Afghanistan The British Armed Forces have played a major role in the Afghanistan War, second only to the U.S. in terms of troop numbers. Between 2001 and 2010, over 325 British forces personnel and MOD civilians were killed, exceeding the death toll of the Falklands War, with some 4,000 injured. A phased withdrawal began from 2011, with a gradual transition of districts and provinces which saw Afghan forces taking over more and more of the security operations. Japan is devastated by a 9.0 magnitude earthquake and tsunami On 11th March 2011, a 9.0-magnitude quake and subsequent tsunami hit the east of Japan, killing nearly 16,000 and leaving another 2,600 missing. The earthquake was the most powerful ever known to hit Japan, and among the five most powerful in the world since modern record-keeping began in 1900. As well as loss of life and destruction of infrastructure, the tsunami caused several nuclear incidents. The death of Osama bin Laden Credit: NASA

your children well.jp 25 Great Thinkers Every College Student Should Read By Donna Scott College is for expanding one’s intellectual horizons. Unfortunately, drinking and having fun, can distract from learning about history’s great thinkers. From Mark Twain to Confucius, an educated individual should posses some knowledge of certain philosophers, artists and thinkers. Here are 25 great thinkers every college student should read, even if professors don’t assign them. Western Philosophers Western universities understandably tend to focus on Western philosophers and thinkers. Ralph Waldo Emerson: Born in Boston, Massachusetts, Emerson was an influential figure in the first recognized American school of philosophical thought. Eastern Thinkers Eastern philosophies have proven influential on figures throughout history from Marco Polo to the Beatles. Statesman Polls show few people trust politicians. Winston Churchill: In his nation’s darkest hour, Winston Churchill served as a beacon of inspiration and support. Writers and Artists