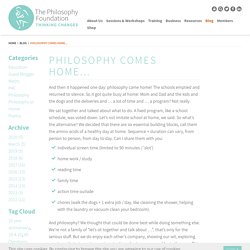 The schools emptied and returned to silence. So it got quite busy at home: Mom and Dad and the kids and the dogs and the deliveries and … a lot of time and … a program? Not really. We sat together and talked about what to do. A fixed program, like a school schedule, was voted down. Individual screen time (limited to 90 minutes / ‘slot’) home work / study reading time family time action time outside chores (walk the dogs + 1 extra job / day, like cleaning the shower, helping with the laundry or vacuum clean your bedroom). Five philosophers on the joys of walking. René Descartes argued that each of us is, fundamentally, a thinking thing. 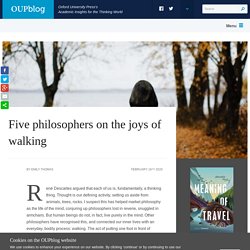 Thought is our defining activity, setting us aside from animals, trees, rocks. I suspect this has helped market philosophy as the life of the mind, conjuring up philosophers lost in reverie, snuggled in armchairs. But human beings do not, in fact, live purely in the mind. Teaching Units – 1000-Word Philosophy: An Introductory Anthology. Below are links to select sets of short introductory readings from 1000-Word Philosophy: An Introductory Anthology to help create “course modules” on common topics in introductory philosophy and ethics courses. 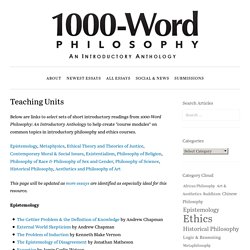 Epistemology, Metaphysics, Ethical Theory and Theories of Justice, Contemporary Moral & Social Issues, Existentialism, Philosophy of Religion, Philosophy of Race & Philosophy of Sex and Gender, Philosophy of Science, Historical Philosophy, Aesthetics and Philosophy of Art This page will be updated as more essays are identified as especially ideal for this resource. Epistemology. Mental Illness in Kids- The Silent Tragedy Affecting Today's Children. No, “increased diagnostics alone” is not the answer! 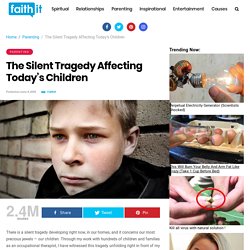 No, “they all are just born like this” is not the answer! No, “it is all the school system’s fault” is not the answer! Yes, as painful as it can be to admit, in many cases, WE, parents, are the answer to many of our kids’ struggles! It is scientifically proven that the brain has the capacity to rewire itself through the environment. Great Popular Philosophy Books (that changed my life) I am a reader of non-fiction. 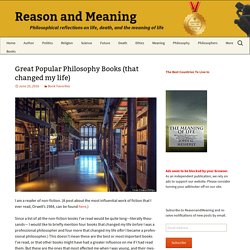 (A post about the most influential work of fiction that I ever read, Orwell’s 1984, can be found here.) Since a list of all the non-fiction books I’ve read would be quite long—literally thousands— I would like to briefly mention four books that changed my life before I was a professional philosopher and four more that changed my life after I became a professional philosopher.) This doesn’t mean these are the best or most important books I’ve read, or that other books might have had a greater influence on me if I had read them.

But these are the ones that most affected me when I was young, and their message resonates within me still. The Ultimate Plastic Surgery Clinic guide in Seoul, Korea - PurseForum. Benefit of Clergy: Some Notes on Salvador Dali. Jonathan Jones: Why George Orwell was right about Salvador Dali (The Guardian) This material remains under copyright and is reproduced by kind permission of the Orwell Estate and Penguin Books. 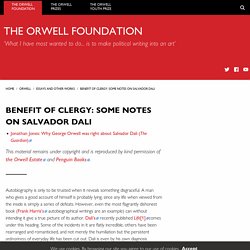 Autobiography is only to be trusted when it reveals something disgraceful. A man who gives a good account of himself is probably lying, since any life when viewed from the inside is simply a series of defeats. However, even the most flagrantly dishonest book (Frank Harris’s autobiographical writings are an example) can without intending it give a true picture of its author. Dali’s recently published Life[1]comes under this heading. Here, then, are some of the episodes in Dali’s life, from his earliest years onward.

When he is six years old there is some excitement over the appearance of Halley’s comet: A Field Guide to Getting Lost: Rebecca Solnit on How We Find Ourselves. “On how one orients himself to the moment,” Henry Miller wrote in reflecting on the art of living, “depends the failure or fruitfulness of it.” Indeed, this act of orienting ourselves — to the moment, to the world, to our own selves — is perhaps the most elusive art of all, and our attempts to master it often leave us fumbling, frustrated, discombobulated. And yet therein lies our greatest capacity for growth and self-transcendence. Rebecca Solnit, whose mind and writing are among the most consistently enchanting of our time, explores this tender tango with the unknown in her altogether sublime collection A Field Guide to Getting Lost (public library). 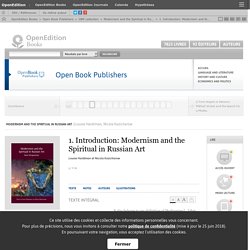 Morgan (Minneapolis, (...) It also belongs to my definition of Modernism […] that art, that aesthetic experience no longer needs to be justified in other terms than its own, that art is an end in itself and that the aesthetic is an autonomous value. It could now be acknowledged that art doesn’t have to teach, doesn’t have to celebrate or glorify anybody or anything, doesn’t have to advance causes; that it has become free to distance itself from religion, politics, and even morality. 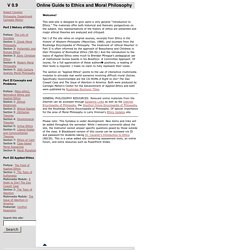 " The materials offer both historical and thematic perspectives on the subject. Key representatives of the history of ethics are presented and major ethical theories are analyzed and critiqued. Moral Relativism. 1. 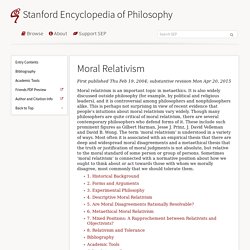 Historical Background Though moral relativism did not become a prominent topic in philosophy or elsewhere until the twentieth century, it has ancient origins. Biblical art - culture throughout the centuries. Stories in the bible have always inspired artists. 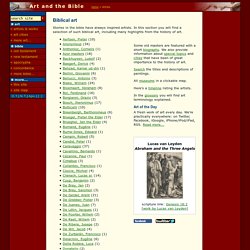 In this section you will find a selection of such biblical art, including many highlights from the history of art. Some old masters are featured with a short biography. We also provide information about special topics and cities that have been of great importance to the history of art. Search the titles and descriptions of paintings. Ekphrastic poem generator. Ekphrasis: Poetry Confronting Art. "And first Hephasestus makes a great and massive shield, blazoning well-wrought emblems all across its surface, raising a rim around it, glittering, triple-ply with a silver shield-strap run from edge to edge and five layers of metal to build the shield itself. " Music Builds Character Aristotle, Politics VIII 5, 1340a14–b5. Moral Relativism. Online Guide to Ethics and Moral Philosophy. Best Philosophy Podcasts (2019) Aristotle’s Philosophy of Friendship Still Matters Today. Nobel-Winning Physicist Niels Bohr on Subjective vs. Objective Reality and the Uses of Religion in a Secular World.

In the autumn of 1911, just as the dawn of quantum mechanics and Einstein’s groundbreaking theory of relativity were unsettling our understanding of existence, some of the world’s most influential physicists were summoned to Brussels for the Solvay Conference — an invitation-only gathering that would become a turning point for modern physics and our basic understanding of reality. The conference was such a towering success that it became a regular event, with twenty-five installments over the next century. The most famous was the fifth, convened in 1927 and chaired by the Dutch Nobel laureate Hendrik Lorenz, whose transformation equations had become the centerpiece of Einstein’s theory of special relativity. Of the 29 attendees that year, 17 would become Nobel laureates; Marie Curie, the sole woman since the inaugural gathering, would become the only scientist to win two Nobel Prizes in two different disciplines. The unresolved question stayed with Heisenberg. Nine Podcasts for a Fuller Life.

By Maria Popova We are storytelling animals and the actual telling of stories — that ancient aural mesmerism of the human voice — continues to bewitch us somehow more thoroughly than any other medium of tale-transmission. This, perhaps, is why podcasts have emerged as a storytelling modality capable of particular enchantment — a marriage of the primeval and the present. Here are nine favorite exemplars of the medium, each showcased via one particularly spectacular episode and a sampler-playlist of three more treats from the show’s archives.

On Being with Krista Tippett (iTunes): Mary Oliver // Listening to the World. The Psychology of What Makes a Great Story. “Stories,” Neil Gaiman asserted in his wonderful lecture on what makes stories last, “are genuinely symbiotic organisms that we live with, that allow human beings to advance.” But what is the natural selection of these organisms — what makes the ones that endure fit for survival? What, in other words, makes a great story? The Art of Looking: How Eleven Different Perspectives Illuminate the Multiple Realities of Our Everyday Wonderland. What Depression Is Really Like. In a piercing letter to his brother, Vincent van Gogh captured the mental anguish of depression in a devastatingly perfect visceral metaphor: “One feels as if one were lying bound hand and foot at the bottom of a deep dark well, utterly helpless.”

Keats on Depression and the Mightiest Consolation for a Heavy Heart. Pythagoras on the Purpose of Life and the Meaning of Wisdom. The Politics of Humor. How Do You Know That You Love Somebody? Philosopher Martha Nussbaum’s Incompleteness Theorem of the Heart’s Truth, from Plato to Proust. Elizabeth Alexander on What Poetry Does for the Human Spirit. Language alters our experience of time. It turns out, Hollywood got it half right. How Bach Will Save Your Soul: German Philosopher Josef Pieper on the Hidden Source of Music’s Supreme Power. Rebecca West on Storytelling as a Survival Mechanism and How Art Transforms Mere Existence into Meaningful Being. Search Tes Resources. OCR Philosophy of Religion: Arguments Based on Observation: Learning Mat by CreativeRE. Problem of Evil and Suffering mindmap by veritybrookes98. AS/A2 Free Will: The Blame Game by toddbeamish.