How to Tell Stories with Maps 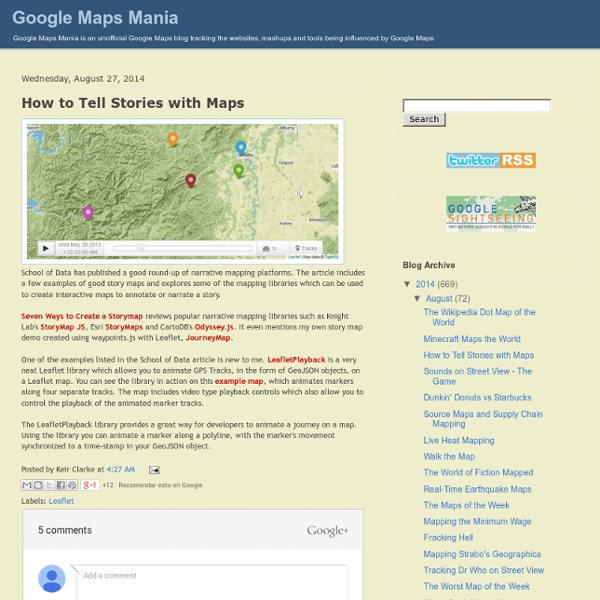 School of Data has published a good round-up of narrative mapping platforms. The article includes a few examples of good story maps and explores some of the mapping libraries which can be used to create interactive maps to annotate or narrate a story. Seven Ways to Create a Storymap reviews popular narrative mapping libraries such as Knight Lab's StoryMap JS, Esri StoryMaps and CartoDB's Odyssey.js. It even mentions my own story map demo created using waypoints.js with Leaflet, JourneyMap. One of the examples listed in the School of Data article is new to me. LeafletPlayback is a very neat Leaflet library which allows you to animate GPS Tracks, in the form of GeoJSON objects, on a Leaflet map. The LeafletPlayback library provides a great way for developers to animate a journey on a map.

Foodmap: recipes as maps & networks FoodmapRecipes as maps, diagrams & networks Map your Recipe See where the fruits and vegetables in your recipe were first domesticated. Includes:Guesstimate the cuisineEtymological data.Example recipesData on current producers. Nonfiction Picture Book Wednesday: Some favourite nonfiction titles for older readers (List 2) It’s Nonfiction Picture Book Wednesday! This is Week 2 of 3 where I will be sharing thirty titles (ten at a time) of my favourite nonfiction books for older readers. The first ten are here. My post last week goes into more detail of why I wanted to put together these three lists. Lochiel Park - Australia's Model Green Village is here Lochiel Park is an important element in the implementation of the State Government’s Strategic Plan and is specifically aligned with the following objective: "South Australia should reduce its greenhouse gas emissions and begin preparing its economy and society for climate change and a carbon constrained world." Lochiel Park is just 8 kilometres from the Adelaide Central Business District alongside the River Torrens in the suburb of Campbelltown. The site has been transformed from a former education institution to model green village incorporating a raft of best practice sustainable technologies.

Printable history timeline worksheets for classrooms On this page you will find three unique printable history timeline worksheets for classrooms in both color and black and white. These blank timeline worksheets are an excellent tool for Social Studies and History projects. They can be used for a wide range of courses, including US History, World History, European History, and Political Science. 10 creative ways to teach English that deliver outstanding results As a creative school, with a track record in fantastic English results, we are often asked what our specific approach is: how do we teach through the arts yet manage to maintain such high expectations from all our pupils? I'd like to share some of these approaches with you: Immersion activities How can children access stories, poems and other texts if their minds and imaginations not fully engaged?

Create custom map add-in excel and powerpoint Do you want to create thematic maps in Excel and PowerPoint? BeGraphic has a free version to build your custom map and geographical dashboard based on live data. With BeGraphic, not only you can make your own editable map, but you can also build custom sales territory map. History of choropleth maps Greek Myth Comix Presents Homer's Iliad & Odyssey Using Stick-Man Drawings The next time some know-it-all moralist blames any number of social ills on violent video games or action films, ask them if they’d rather kids stick to the classics. When they invariably reply in the affirmative, you can smugly direct their attention to Greek Myth Comix’s astonishing infographic detailing the multitude of gruesome killings in the Iliad. Homer’s epic unflinchingly describes, for example, in graphic detail, the death of Lycon, who in Book 16 has a sword thrust through his neck: “nothing held but a piece of skin, and from that, Lycon’s head dangled down.” And if you’ve held on to your lunch, you may be interested to know the grisly circumstances of the other two candidates for “grimmest death.” Just below, see a section of the comic celebrating “stand out performances in battle.”

Poison Fire (2008) The Niger Delta is an environmental disaster zone after fifty years of oil exploitation. One and a half million tons of crude oil has been spilled into the creeks, farms and forests, the equivalent to 50 Exxon Valdez disasters, one per year. Natural gas contained in the crude oil is not being collected, but burnt off in gas flares, burning day and night for decades. The flaring produces as much greenhouse gases as 18 million cars and emits toxic and carcinogenic substances in the midst of densely populated areas.

Volcanoes - Kids Geography Videos, Games and Lessons that Make Learning Fun and Easy Volcanoes for Kids Volcanoes are vents, fissures or openings in the Earth's crust from which hot ashes, gases and magma erupt. On land, volcanoes usually take the form of mountains or hills with one or more volcanic vents. But the vast majority of the world's volcanoes lie beneath the sea along the global oceanic ridges. Support the Global Read Aloud! The Global Read Aloud has connected more than 200,000 students throughout the world. Here is your chance to not only show your Global Read Aloud pride, but also support the project. Every penny earned will be spent on books.

Sacred Spirit of Water Water is a living organism, water is sacred, water is life, water is worth defending and protecting for those yet unborn. Rivers and lakes in Alberta don't stop at provincial borders. These rivers and lakes flow throughout Canada and the United States, therefore everyone will be affected by the ominous bills which have become law. This means the previous 2.5 million lakes and rivers that were protected have been diminished to only 62 protected rivers and 97 lakes. If you enjoy the benefits of the Canadian outdoors, camping, canoeing, boating, fishing, for that matter clean drinking water, you need to ask yourself how will you be impacted by the sale of your water resources? - Create Your Story With My Story Book 0 Comments September 29, 2014 By: Özge Karaoglu Sep 27 Written by: 9/27/2014 4:45 PM

How Earth Made Us The incredible story of the natural forces that have shaped our history presented by Professor Iain Stewart. Our planet has amazing power, and yet that's rarely mentioned in our history books. This series tells the story of how the Earth has influenced human history, from the dawn of civilization to the modern industrial age.