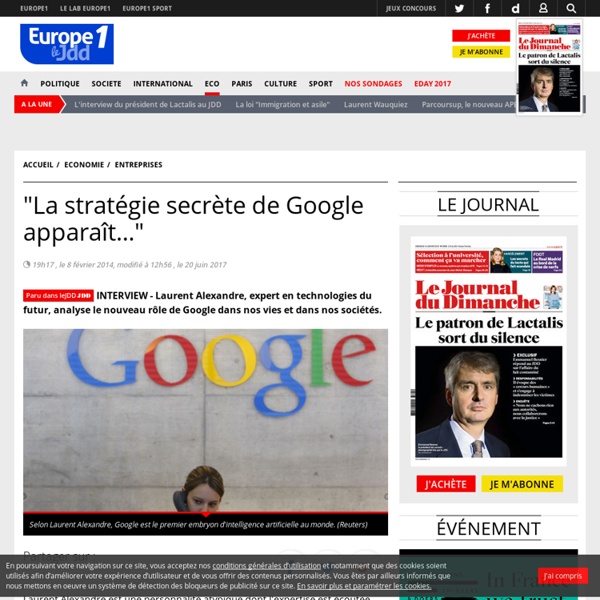 Why Is Google Buying So Many Robot Startups? Via MIT technology Review Forget robotic product delivery. As usual for Google, I suspect it’s all about the data. Google-bot: The M1 Mobile Manipulator from Meka, one of several robot companies acquired recently by Google. Google has quietly bought seven robotics companies, and has given Andy Rubin, the man who originally led the Android project, the job of developing Google’s first robot army. And so, the New York Times suggests it might only be a few years before a Google robot driving in a Google car is delivering products to your door. The vast gulf between current technology and theoretical singularity An interesting pair of news posts caught my eye this week, and they’re worth presenting for general discussion. First, VentureBeat has an interview with futurologist Ray Kurzweil, who made waves in 2005 with his book The Singularity Is Near. In it, Kurzweil posits that we’re approaching a point at which human intelligence will begin to evolve in ways we cannot predict. The assumption is that our superintelligent computers (or brains) will allow us to effectively reinvent what being human means. In our present state, we are, by definition, incapable of understanding what human society would look like after such a shift. Mrow

How a computer sees history after "reading" 35 million news stories So far, humans have relied on the written word to record what we know as history. When artificial intelligence researchers ran billions of those words from decades of news coverage through an automated analysis, however, even more patterns and insights were revealed. A team from the University of Bristol ran 35 million articles from 100 local British newspapers spanning 150 years through both a simple content analysis and more sophisticated machine learning processes.

Google’s Buying All the Robots… Google’s Buying All the Robots (and What This Means for Their Future) A driverless car, Google Glass, Project Loon. These are just some of the projects being developed at Google X, Google’s semi-secret facility dedicated to making major technological advancements (other companies call this the “R&D Department”). Couple this with Google’s recent robotics related acquisitions and we’re getting a clearer view into the company’s future.

The NSA’s SKYNET program may be killing thousands of innocent people In 2014, the former director of both the CIA and NSA proclaimed that "we kill people based on metadata." Now, a new examination of previously published Snowden documents suggests that many of those people may have been innocent. Last year, The Intercept published documents detailing the NSA's SKYNET programme. According to the documents, SKYNET engages in mass surveillance of Pakistan's mobile phone network, and then uses a machine learning algorithm on the cellular network metadata of 55 million people to try and rate each person's likelihood of being a terrorist. 15 Predictions for Tech and Design in 2015 It’s our favorite time of year, when frogs from around the world examine the state of technology’s future. Below you’ll find 15 declarations and projections from experts whose work continually advances the human experience. This compilation forecasts a few of our expectations for the future, and we look forward to your feedback as we collectively consider what is to come. frog About

FLI - Future of Life Institute (If you have questions about this letter, please contact tegmark@mit.edu) Artificial intelligence (AI) research has explored a variety of problems and approaches since its inception, but for the last 20 years or so has been focused on the problems surrounding the construction of intelligent agents - systems that perceive and act in some environment. In this context, "intelligence" is related to statistical and economic notions of rationality - colloquially, the ability to make good decisions, plans, or inferences. The adoption of probabilistic and decision-theoretic representations and statistical learning methods has led to a large degree of integration and cross-fertilization among AI, machine learning, statistics, control theory, neuroscience, and other fields.

Meet the Man Google Hired to Make AI a Reality Geoff Hinton, the AI guru who now works for Google. Photo: Josh Valcarcel/WIRED Geoffrey Hinton was in high school when a friend convinced him that the brain worked like a hologram. To create one of those 3-D holographic images, you record how countless beams of light bounce off an object and then you store these little bits of information across a vast database. While still in high school, back in 1960s Britain, Hinton was fascinated by the idea that the brain stores memories in much the same way. Rather than keeping them in a single location, it spreads them across its enormous network of neurons.