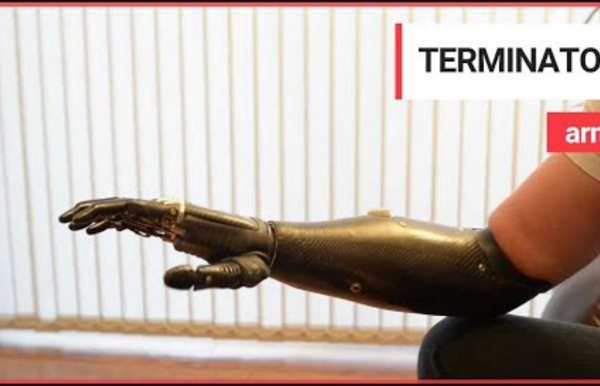 3-D Printer Brings Dexterity To Children With No Fingers : Shots - Health News Hide caption One version of the Robohand includes 3-D printed parts assembled with metal hardware. New parts can be easily "printed" as the child grows. Courtesy of Makerbot Hide caption Ivan Owen, a special effects artist in Bellingham, Wash., creates large mechanical hands. Hide caption The newest version of the Robohand is made of snap-together parts. Richard Van As was working in his home near Johannesburg, South Africa, in May of 2011, when he lost control of his table saw. "It's a possibility that it was a lack of concentration," he says. The carpenter lost two fingers and mangled two more on his right hand. As soon as he got out of the hospital, Van As began researching prosthetics online. So in the meantime, he rigged up an artificial index finger for his right hand with materials from his shop. In time, Van As came across a YouTube video from Ivan Owen. "The complexity of the human hand has always fascinated me [and] really captured my imagination," Owen says. YouTube

The world's first bionic hand that will allow patients to 'feel' sensations set to be transplanted onto a patient Will give amputees a genuine sense of touchAttached directly to the nervous system via electrodes'We hope one day the user will just forget it's there' Dr Silvestro Micera By Nick Mcdermott, Science Reporter Published: 18:34 GMT, 17 February 2013 | Updated: 08:21 GMT, 18 February 2013 A bionic hand which allows the recipient to feel ‘lifelike’ sensations is to be transplanted on to a patient’s arm for the first time. Until now, artificial limbs have been able to pick up brain signals destined for the absent hand and translate them into movements, but they could not give sensory feedback. The new hand, which is attached directly to the nervous system via electrodes clipped on to two of the arm’s main nerves, aims to restore a sense of touch in amputees. Scientists hope the new bionic hand will prove to be a breakthrough in the development of artificial limbs The bionic hand is attached directly to the central nervous system meaning it can be controlled directly by the recipient

Bionic humans are about to get an upgrade, thanks to monkey cyborgs A - Given that decoding the human genome went from being something incredibly complex that would cost millions and take years to do, to something that can be done via mail-order and a couple hundred bucks in just a couple of decades, I doubt that it'll be centuries before we understand the human brain. Probably more like a few decades. B - We needn't develop directly analogous bionics to be a significant threat to what exists in nature (and ourselves). Consider an autonomous supply chain that was able to recreate all of its components without human intervention, perfect generational copying, as well as guided evolution of new versions. First of all, we don't need to understand the brain perfectly to make good bionics. Keep in mind that all the information on how to make the brain is stored in the human DNA, which is much less complex system than the brain itself.

Implant Devices Collect Patient Data, But Patients Denied Access On the brink of a health information revolution that promises to offer round-the-clock body monitoring and personalized medicine, the medical implant company Medtronic has some sobering news for patients who use their devices: you don’t have access to the data collected by their devices on your vital organs. That’s not exactly what patients want to hear, especially when implant makers are on an all out data grab to acquire real-time patient information using new technologies. Instead of being able to praise the strides that medicine is making with these implants, patients are left feeling out of the loop on their own health. According to a recent article in the Wall Street Journal, the company acknowledged that implants like their heart defibrillators collect a mass of data on the inner workings of patients’ bodies. However, current U.S. regulations dictate that the raw health data is only accessible to Medtronic customers, who are physicians and hospitals.