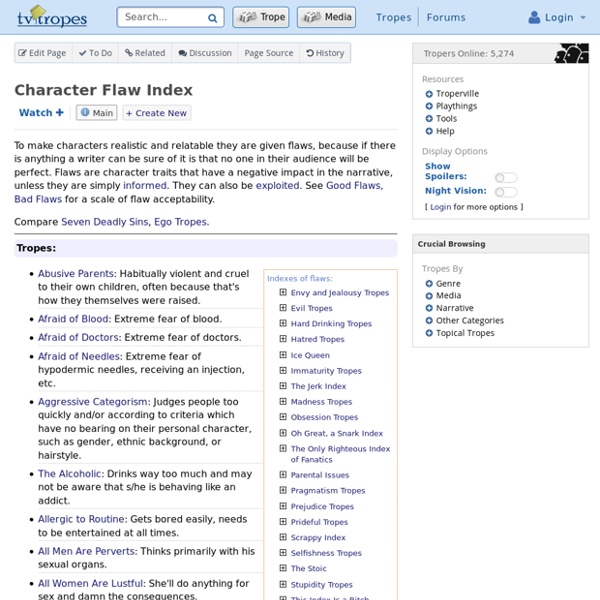 To make characters realistic and relatable they are given flaws, because if there is anything a writer can be sure of it is that no one in their audience will be perfect. Flaws are character traits that have a negative impact in the narrative, unless they are simply informed. They can also be exploited. See Good Flaws, Bad Flaws for a scale of flaw acceptability. Compare Seven Deadly Sins, Ego Tropes. Abusive Parents: Habitually violent and cruel to their own children, often because that's how they themselves were raised.

8 ½ Character Archetypes You Should Be Writing Here’s the thing about character archetypes: everybody’s got his own take. Do you run with Joseph Campbell’s gazillion and one Jungian archetypes? How about Dramatica’s double quad of eight archetypes? Or maybe screenwriter Michael Hauge’s simple offering of four main players? Nothing wrong with running with all of them. The fact that archetypes are both universally applicable and yet endlessly varying provides authors with both structure and flexibility.

Heroes and Villains Heroes and villains–they’re of course at opposite end of the spectrum, in terms of characters, but they share more than might be obvious at first glance, and if you’re in the business of writing fiction and creating such characters, it can be useful to think about those things. Of course, the principal element that heroes and villains have in common is their function in terms of the story: it is their interaction which determines the main action of the plot. At its most basic, it is either that the hero is being specifically targeted by the villain, or the villain has general nefarious plots which the hero sets out to foil. But a common function in the plot isn’t the only thing these two extreme types of characters share. They are leaders, not followers, and they also share high doses of intelligence, imagination and determination, all of which are neutral qualities to be used for either good or bad.

Famous Writers' Small Writing Sheds and Off-the-Grid Huts Previous image Next image Roald Dahl's writing hut, The Gipsy House 6 Ways to Make Sure Your Reader’s Brain Syncs with Your Protagonist’s Brain photo by Andres Musta via Flickr Because here’s the thing: it’s not fiction. It’s fact. Except, you know, for the Vulcan part. And, okay, the part where you have to put your fingertips on the other guy’s face to do it. The 12 brand archetypes all successful businesses are built on Successful brands have a strong sense of identity, one that mirrors the hopes and aspirations of their customers. But finding your voice – especially as a small business – can be difficult. And expensive. Identifying your brand archetype from this list will save you time and money and connect you instantly to your audience. Why do so many films seem to have the exact same characters in them? The rugged action hero with a tortured past.

Warts and All The title of this post comes from a (probably apocryphal) story about Oliver Cromwell asking to have his portrait painted without any of the flattering techniques of portraits of the time–he wanted to be shown as he really looked, ‘warts and all’. I’ve been thinking a lot, lately, about what this phrase means to us as writers–about how we go about constructing characters who seem truly human, not representations of some impossible ideal. Now, we all know that we can’t make our heroes and heroines too perfect.

Fantasy Name Generator By Samuel Stoddard - Version 1.5 One of the perks of creating fantasy stories -- whether by writing a story or game or by role-playing -- is you get to make up the names. Some people relish the task while others are frustrated by it. Some like it but can't seem to create names that are diverse enough. Fantasy Name Generator is a tool that can help you. It can generate an endless number of random names (of people, places, or anything) that would be suitable for use in a fantasy setting. Character and Characterisation in the Novel How to write convincing characters Characterisation - the task of building characters - isn't easy. But if you're struggling to build characters with real life and vigour, just follow these rules. If you do follow them correctly, we can pretty much guarantee that your characterisation will be just fine! Know what kind of character you are writing There are roughly two types of protagonist in fiction.