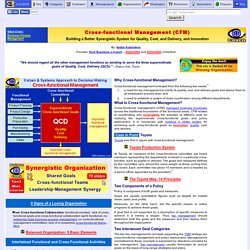 Making cross-enterprise collaboration work - Accenture Outlook. March 2012 When the Boeing 787 Dreamliner made its first commercial flight in October 2011, the aerospace giant wasn’t the only company with something to cheer about. 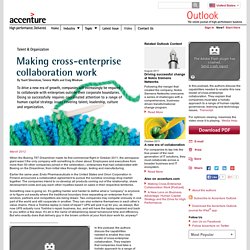 Employees and executives from more than 50 other companies joined in the celebration—enterprises that had collaborated with Boeing on the Dreamliner, from initial idea through design, testing and manufacturing. Earlier the same year, Endo Pharmaceuticals in the United States and Orion Corporation in Finland announced a collaborative agreement to pursue the lucrative oncology drug market together. The companies intend to co-develop all products coming out of the relationship, share development costs and pay each other royalties based on sales in their respective territories.

CROSS-ENTERPRISE LEADERSHIP: A NEW APPROACH TO MANAGING IN THE 21st CENTURY. While the environment of business has become global and more complex, the organization as we know it has remained static and hierarchical. 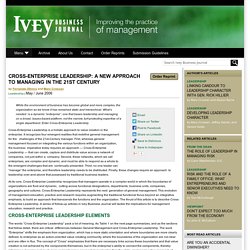 What’s needed is a dynamic “enterprise”, one that bases leadership and managing on a broad, issues-based platform, not the narrow, turf-protecting expertise of a single department. Enter Cross-Enterprise Leadership. Cross-Enterprise Leadership is a holistic approach to value creation in the enterprise. It recognizes four emergent realities that redefine general management for the challenges of the 21st-Century manager.

First, whereas general management focused on integrating the various functions within an organization, the business imperative today requires an approach — Cross-Enterprise Leadership — that can create, capture and distribute value across a network of companies, not just within a company. 42 Rules for Growing Enterprise Revenue - Lilia Shirman - Google Books. Virtual Reality Meetings Are the New Awkward Teleconference. As virtual reality advances, and especially applications for the Oculus Rift, we’ve seen VR goggles transport viewers into cult arcade games, holiday villas in Tuscany, and all manner of X-rated scenes. 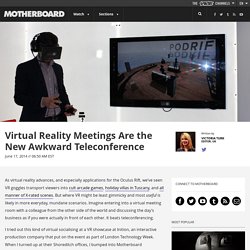 But where VR might be least gimmicky and most useful is likely in more everyday, mundane scenarios. Imagine entering into a virtual meeting room with a colleague from the other side of the world and discussing the day’s business as if you were actually in front of each other. It beats teleconferencing. Cross Functional Teams. Innovation in communication has tremendously aided in the success of cross-functional teamsoperating in different parts of the world. 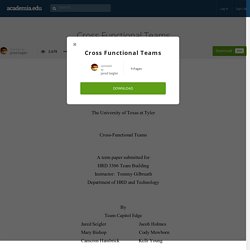 An example of this process is as follows: select team members who have a mix of skills and expertise clarify the objectives and outcomes identify roles and responsibilities show evidence of how each person adds value to the team.This process is critically important to the overall success of the team. Virtual teams and cross functional teams. Normally teams do their work face to face. 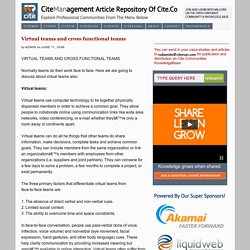 Here we are going to discuss about virtual teams also. Virtual teams: Virtual teams use computer technology to tie together physically dispersed members in order to achieve a common goal. They allow people to collaborate online using communication links like wide area networks, video conferencing, or e-mail whether theyâ€™re only a room away or continents apart.

Virtual teams can do all he things that other teams do share information, make decisions, complete tasks and achieve common goals. 6 Awesome Cooperative Classroom Games. How often has this scenario played out in your classroom? 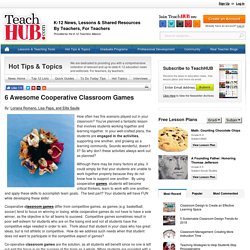 You’ve planned a fantastic lesson that involves students working together and learning together. In your well-crafted plans, the students are engaged in the activities, supporting one another, and growing as a learning community. Sounds wonderful, doesn’t it? So why don’t these activities always work out as planned? Although there may be many factors at play, it could simply be that your students are unable to work together properly because they do not know how to support one another. Cooperative classroom games differ from competitive games, as games (e.g. basketball, soccer) tend to focus on winning or losing, while cooperative games do not have to have a sole winner, as the objective is for all teams to succeed.

Co-operative classroom games are the solution, as all students will benefit since no one is left out and the focus is on the success of the team as a whole. Two Key Issues that often Hinder Collaboration Between Teams in Large Companies. I've spent all of my professional career working at a large multinational company. 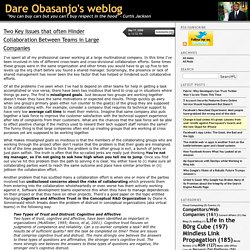 In this time I've been involved in lots of different cross-team and cross-divisional collaboration efforts. Some times these groups were in the same organization and other times you would have to go up five to ten levels up the org chart before you found a shared manager. Surprisingly, the presence or lack of shared management has never been the key factor that has helped or hindered such collaborative efforts. Of all the problems I've seen when I've had to depend on other teams for help in getting a task accomplished or vice versa; there have been two insidious that tend to crop up in situations where things go awry. The first is misaligned goals. What makes misaligned goals so insidious is that the members of the collaborating groups who are working through the project often don't realize that the problem is that their goals are misaligned.

Managing Cross-Divisional Collaboration - Forum. 17 Strategies For Improving Collaboration. In a complex business environment where organizations are made up of more and more specialists, a great value is placed on leaders who can bring diverse groups together in a spirit of cooperation to get things done. 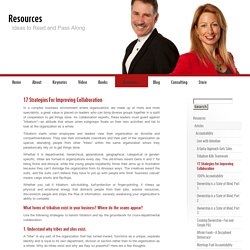 As collaboration experts, these leaders must guard against “tribalism”—an attitude that arises when subgroups fixate on their own activities and fail to look at the organization as a whole. Tribalism starts when employees and leaders view their organization as divisible and compartmentalized. They see their immediate coworkers and their part of the organization as special, alienating people from other “tribes” within the same organization whom they paradoxically rely on to get things done.

Whether it is departmental, hierarchical, generational, geographical, categorical or gender-specific, tribes are formed in organizations every day. What forms of tribalism exist in your business? 1. 2. To break down the walls of tribalism you have to understand the tribe. 3.