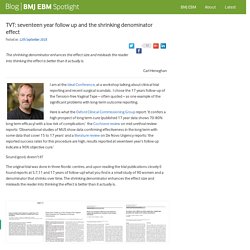 Carl Heneghan I am at the Ideal Conference, at a workshop talking about clinical trial reporting and recent surgical scandals. I chose the 17 years follow-up of the Tension-free Vaginal Tape – often quoted – as one example of the significant problems with long-term outcome reporting. Here is what the Oxford Clinical Commissioning Group report: ‘it confers a high prospect of long term cure (published 17 year data shows 70-80% long term efficacy) with a low risk of complication;’ the Cochrane review on mid-urethral review reports: ‘Observational studies of MUS show data confirming effectiveness in the long term with some data that cover 15 to 17 years’ and a literature review on De Novo Urgency reports: ‘the reported success rates for this procedure are high, results reported at seventeen year’s follow up indicate a 90% objective cure.’ Sound good, doesn’t it? UGSA 2018 Debate - Dr Marcus Carey. 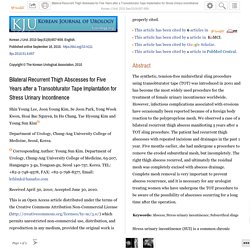 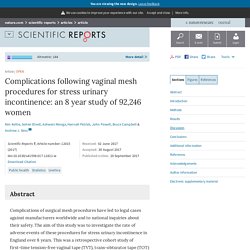 All data extraction and analyses were carried out in accordance with relevant guidelines and regulations. Pseudonymised episode-level HES data were provided by NHS Digital to the Newcastle upon Tyne Hospitals NHS Foundation Trust under Data Sharing Framework Contract CON-313204-B3P1Y and Data Sharing Agreement HDIS-DSC-0109. In accordance with the terms of these agreements, only aggregated totals of patients and procedures are reported and no identifiable information was available for analysis. This research involved only previously collected, non-identifiable information and did not require review by a UK Research Ethics Committee. Study design and population. Informed consent checklists for midurethral slings: a common-sense approach. - PubMed - NCBI. 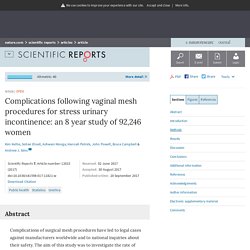 All data extraction and analyses were carried out in accordance with relevant guidelines and regulations. Ws29 literature11. Adverse Events over Two Years after Retropubic or Transobturator Midurethral Sling Surgery: Findings from the Trial of Midurethral Sling (TOMUS) Study. Safety considerations for synthetic sling surgery : Nature Reviews Urology : Nature Research. Implantation of a synthetic midurethral sling (SMUS) is the most commonly performed anti-incontinence operation in women worldwide. 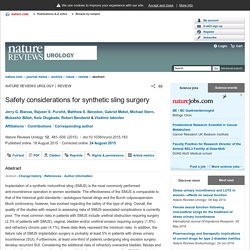 The effectiveness of the SMUS is comparable to that of the historical gold standards—autologous fascial slings and the Burch colposuspension. Much controversy, however, has evolved regarding the safety of this type of sling. Overall, the quality of the studies with respect to assessing risks of SMUS-associated complications is currently poor. The most common risks in patients with SMUS include urethral obstruction requiring surgery (2.3% of patients with SMUS), vaginal, bladder and/or urethral erosion requiring surgery (1.8%) and refractory chronic pain (4.1%); these data likely represent the minimum risks. 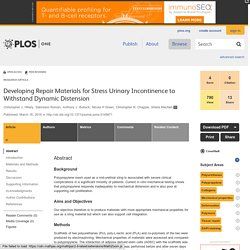 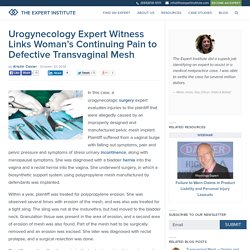 Plaintiff suffered from a vaginal bulge with falling out symptoms, pain and pelvic pressure and symptoms of stress urinary incontinence, along with menopausal symptoms. She was diagnosed with a bladder hernia into the vagina and a rectal hernia into the vagina. She underwent surgery, in which a biosynthetic support system using polypropylene mesh manufactured by defendants was implanted. Within a year, plaintiff was treated for polypropylene erosion.

She was observed several times with erosion of the mesh, and was also was treated for a tight sling. Plaintiff currently suffers from pain in the back, stomach, pelvis, rectum and legs, as well as ongoing urinary incontinence. Question(s) For Expert Witness 1.) Expert Witness Response Working on a similar case? It only takes 30-seconds to get started. Post Tags. Mesh Complications & Surgery. Background, Symptoms, and Causes The majority of patients who undergo mesh surgery for urinary incontinence and pelvic organ prolapse have successful outcomes. 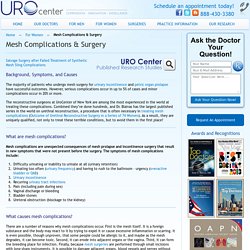 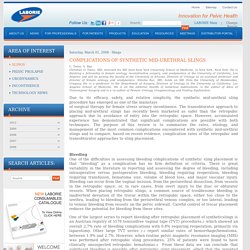 Twiss, S. Raz Christian O. Twiss, MD, received his MD from New York University School of Medicine, in New York, New York. He is finishing a fellowship in female urology, reconstructive surgery, and urodynamics at the University of California, Los Angeles and will be joining the faculty at the University of Arizona, Division of Urology as an assistant professor and director of female urology and urodynamics. Due to its efficacy, safety, and relative simplicity, the synthetic mid-urethral sling procedure has emerged as one of the mainstays of surgical therapy for female stress urinary incontinence. BleedingOne of the difficulties in assessing bleeding complications of synthetic sling placement is that “bleeding” as a complication has no firm definition or criteria. 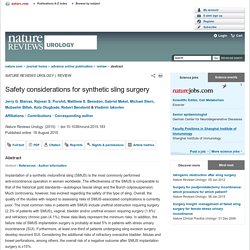 The effectiveness of the SMUS is comparable to that of the historical gold standards—autologous fascial slings and the Burch colposuspension. Mesh Sling in an Era of Uncertainty_ Lessons Learned and the Way Forward. Despite warnings, mesh use for prolapse on the rise. Despite the FDA’s warnings about health risks associated with the use of surgical mesh for transvaginal repair of pelvic organ prolapse (POP), use of the device is increasing, according to a study of POP patients in New York state. Read: Statins delay PCa progression in patients on ADT At the same time, risks of reinterventions within 1 year and post-surgery urinary retention continue, said the authors of the study, which was published online in BMJ (June 2, 2015). Researchers at Weill Medical College of Cornell University in New York analyzed a statewide database of nearly 28,000 women who had prolapse repair procedures in the state from 2008 to 2011.

More than 7,300 women underwent prolapse repair with mesh and 20,653 had the procedure without mesh. Acute In Vivo Response to an Alternative Implant for Urogynecology. Safety considerations for synthetic sling surgery. 000011.pdf. Editorial - What is the role of mid-urethral slings in the management of stress incontinence in women?

Urinary incontinence is very common in women: about 40% have persistent urinary incontinence after childbirth.[1] Urine leakage can affect quality of life, including social activities, work, psychological wellbeing, and sexual relationships. Women with stress urinary incontinence (leakage when they cough, laugh, or exercise) normally try pelvic floor exercises in the first instance. If this fails, more women than ever before are seeking a surgical cure.