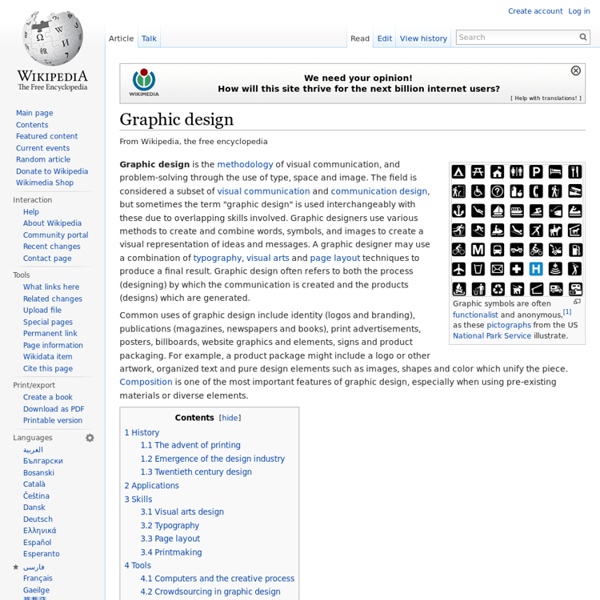 Graphic design is the methodology of visual communication, and problem-solving through the use of type, space and image. The field is considered a subset of visual communication and communication design, but sometimes the term "graphic design" is used interchangeably with these due to overlapping skills involved. Graphic designers use various methods to create and combine words, symbols, and images to create a visual representation of ideas and messages. History[edit] Page from the Book of Kells: Folio 114v, Decorated text. While Graphic Design as a discipline has a relatively recent history, first coined by William Addison Dwiggins in 1922,[2] graphic design-like activities span the history of humankind: from the caves of Lascaux, to Rome's Trajan's Column to the illuminated manuscripts of the Middle Ages, to the dazzling neons of Ginza. The advent of printing[edit] Emergence of the design industry[edit] Twentieth century design[edit] Applications[edit] Skills[edit] Visual arts design[edit]

Graffiti Graffiti in Toronto Graffiti is writing or drawings that have been scribbled, scratched, or sprayed illicitly on a wall or other surface, often in a public place.[1] Graffiti ranges from simple written words to elaborate wall paintings, and it has existed since ancient times, with examples dating back to Ancient Egypt, Ancient Greece, and the Roman Empire.[2] In modern times, paint (particularly spray paint) and marker pens have become the most commonly used graffiti materials. In most countries, marking or painting property without the property owner's consent is considered defacement and vandalism, which is a punishable crime. Graffiti may also express underlying social and political messages and a whole genre of artistic expression is based upon spray paint graffiti styles. Controversies that surround graffiti continue to create disagreement amongst city officials, law enforcement, and writers who wish to display and appreciate work in public locations. Etymology History

Metamedia As coined in the writings of Marshall McLuhan, metamedia referred to new relationships between form and content in the development of new technologies and new media.[1] McLuhan's concept described the totalizing effect of media. In the late 20th and early 21st centuries, the term was taken up by writers such as Douglas Rushkoff and Lev Manovich. Contemporary metamedia, such as at Stanford, has been expanded to describe, "a short circuit between the academy, the art studio and information science exploring media and their archaeological materiality Development[edit] While hypermedia was coined a year later in 1965 by a programmer to refer to file systems of multimedia, the term metamedia was coined in 1964, referring to the theoretical effects of mass media. More recent distinctions between old and new media have meant that metamedia becomes used to describe modernity and art more than systems. [edit] See also[edit] References[edit]

Jean-Michel Basquiat Jean-Michel Basquiat (December 22, 1960 – August 12, 1988) was an American artist, musician and producer.[1] Basquiat first achieved notoriety as part of SAMO, an informal graffiti group who wrote enigmatic epigrams in the cultural hotbed of the Lower East Side of Manhattan, New York City during the late 1970s where the hip hop, post-punk and street art movements had coalesced. By the 1980s he was exhibiting his Neo-expressionist and Primitivist paintings in galleries and museums internationally. The Whitney Museum of American Art held a retrospective of his art in 1992. Early life[edit] Jean-Michel Basquiat, born in Brooklyn, New York, was the second of four children of Matilda Andrades (July 28, 1934 – November 17, 2008)[4] and Gerard Basquiat (1930 – July 7, 2013).[5][6] He had two younger sisters: Lisane, born in 1964, and Jeanine, born in 1967.[4] In September 1968, when Basquiat was about 8, he was hit by a car while playing in the street. Basquiat dropped out of Edward R.

List of color palettes Only a sample and the palette's name are given here. More specific articles are linked from the name of each palette, for the test charts, samples, simulated images, and further technical details (including references). In the past, manufacturers have developed many different display systems in a competitive, non-collaborative basis (with a few exceptions, as the VESA consortium), creating many proprietary, non-standard different instances of display hardware. Often, as with early personal and home computers, a given machine employed its unique display subsystem, with its also unique color palette. Also, software developers had made use of the color abilities of distinct display systems in many different ways. In order to organize the material, color palettes have been grouped following arbitrary but rational criteria. Here is the common color test chart and sample image used to render every palette in this series of articles: List of monochrome and RGB palettes[edit] See also[edit]

Hyperlink In some hypertext, hyperlinks can be bidirectional: they can be followed in two directions, so both ends act as anchors and as targets. More complex arrangements exist, such as many-to-many links. The effect of following a hyperlink may vary with the hypertext system and may sometimes depend on the link itself; for instance, on the World Wide Web, most hyperlinks cause the target document to replace the document being displayed, but some are marked to cause the target document to open in a new window. Another possibility is transclusion, for which the link target is a document fragment that replaces the link anchor within the source document. Not only persons browsing the document follow hyperlinks; they may also be followed automatically by programs. Types of links[edit] Inline links[edit] An inline link displays remote content without the need for embedding the content. Anchor[edit] Hyperlinks in various technologies[edit] Hyperlinks in HTML[edit] XLink: hyperlinks in XML[edit]

Egon Schiele Egon Schiele (German: [ˈʃiːlə] ( ) ƩEE-lə; June 12, 1890 – October 31, 1918) was an Austrian painter. A protégé of Gustav Klimt, Schiele was a major figurative painter of the early 20th century. His work is noted for its intensity, and the many self-portraits the artist produced. Early life[edit] Schiele aged 16, self-portrait from 1906 Schiele was born in 1890 in Tulln, Lower Austria. Self portrait Academy of Fine Arts[edit] When Schiele was 15 years old, his father died from syphilis, and he became a ward of his maternal uncle, Leopold Czihaczec, also a railway official.[1] Although he wanted Schiele to follow in his footsteps, and was distressed at his lack of interest in academia, he recognised Schiele's talent for drawing and unenthusiastically allowed him a tutor; the artist Ludwig Karl Strauch. Klimt and first exhibitions[edit] In 1907, Schiele sought out Gustav Klimt. Controversy, success and marriage[edit] Schiele's drawing of his prison cell in Neulengbach Edith Schiele 1915

Colour look-up table A colour look-up table (CLUT) is a mechanism used to transform a range of input colours into another range of colours. It can be a hardware device built into an imaging system or a software function built into an image processing application. The hardware colour look-up table will convert the logical colour (pseudo-colour) numbers stored in each pixel of video memory into physical colours, normally represented as RGB triplets, that can be displayed on a computer monitor. The colour palette is simply a block of fast RAM which is addressed by the logical colour and whose output is split into the red, green, and blue levels which drive the actual display (e.g., a CRT or cathode ray tube). A CLUT is characterized by: A common example would be a palette of 256 colours (e.g. An abstract, graphic example would be: Changes to the palette affect the whole screen at once and can be used to produce special effects which would be much slower to produce by updating pixels. See also[edit]

Art Nouveau Art Nouveau is considered a "total" art style, embracing architecture, graphic art, interior design, and most of the decorative arts including jewellery, furniture, textiles, household silver and other utensils and lighting, as well as the fine arts. According to the philosophy of the style, art should be a way of life. For many well-off Europeans, it was possible to live in an art nouveau-inspired house with art nouveau furniture, silverware, fabrics, ceramics including tableware, jewellery, cigarette cases, etc. Artists desired to combine the fine arts and applied arts, even for utilitarian objects.[3] Origins[edit] Art Nouveau interior at the 1900 Paris Universal Exhibition by Bruno Möhring, German pavilion. Naming[edit] Jugendstil sculpture, detail of facade in Metz, France Art Nouveau is usually known as Jugendstil (pronounced [ˈjuːɡən̩tʃtiːl ]) in Germany, as Modern (Модерн) in Russia, as Modernisme in Catalonia (Spain), as Secession in Austria-Hungary and as Stile Liberty in Italy.

Web colors Web colors are colors used in displaying web pages, and the methods for describing and specifying those colors. Colors may be specified as an RGB triplet or in hexadecimal format (a hex triplet). They may also be specified according to their common English names in some cases. Often a color tool or other graphics software is used to generate color values. In some uses, hexadecimal color codes are specified with notation using a leading number sign (#).[1][2] A color is specified according to the intensity of its red, green and blue components, each represented by eight bits. Hex triplet[edit] A hex triplet is a six-digit, three-byte hexadecimal number used in HTML, CSS, SVG, and other computing applications, to represent colors. Byte 1: red value (color type red) Byte 2: green value (color type green) Byte 3: blue value (color type blue) For example, consider the color where the red/green/blue values are decimal numbers: red=36, green=104, blue=160 (a greyish-blue color). Color table[edit]