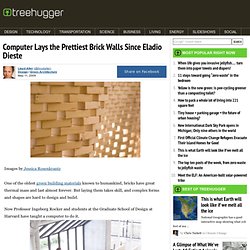 But laying them takes skill, and complex forms and shapes are hard to design and build. Now Professor Ingeborg Rocker and students at the Graduate School of Design at Harvard have taught a computer to do it. From Dezeen: But did the Swiss beat them to it? Commenters on Dezeen pointed to earlier work by Fabio Gramazio and Matthias Kohler of ETH Zurich, who used real brick for an installation at the Venice Biennale Alessandra Bello From Gramazio & Kohler: The design of the wall followed algorithmic rules and was built on site at the Giardini, the grounds of the Biennale, by the R-O-B mobile robotic fabrication unit. Eladio Dieste did it the hard way Fifty years ago, a talented architect could put together a team of masons to build this kind of thing, as Eladio Dieste did with his church in Uruguay.

Hand-Crafted by Robots: Unbelievably Curved Brick Walls. To be fair, the ‘hand’ doing the crafting is in fact the extremity of a robotic arm, in turn connected to a highly advanced computer construction – still, the effect is incredibly convincing: these bricks look like they were manually stacked by someone with a great deal of time and expertise on their hands, able to curve them not just in a two-axis wave but in a complex three-dimensional fashion. 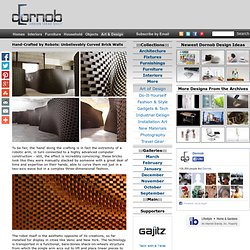 The robot itself is the aesthetic opposite of its creations, so far installed for display in cities like Venic and New York. The technology is transported in a functional, bare-bones shack-on-wheels structure from which the single arm arcs out to lift and place linear pieces to slowly form incredible curves.

JavaScript. JavaScript is classified as a prototype-based scripting language with dynamic typing and first-class functions. 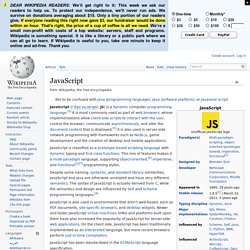 This mix of features makes it a multi-paradigm language, supporting object-oriented,[6] imperative, and functional[1][7] programming styles. JavaScript has been standardized in the ECMAScript language specification. History[edit] Beginnings at Netscape[edit] JavaScript was originally developed by Brendan Eich, while working for Netscape Communications Corporation. Although it was developed under the name Mocha, the language was officially called LiveScript when it first shipped in beta releases of Netscape Navigator 2.0 in September 1995, but it was renamed JavaScript[10] when it was deployed in the Netscape browser version 2.0B3.[11] The change of name from LiveScript to JavaScript roughly coincided with Netscape adding support for Java technology in its Netscape Navigator web browser.

Rhino (JavaScript engine) Rhino can be used as a debugger by making use of the Rhino shell. 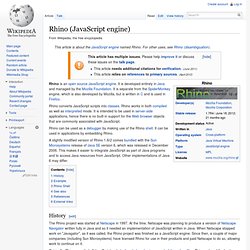 It can be used in applications by embedding Rhino. A slightly modified version of Rhino 1.6r2 comes bundled with the Sun Microsystems release of Java SE version 6, which was released in December 2006. This makes it easier to integrate JavaScript as part of Java programs and to access Java resources from JavaScript. Other implementations of Java 6 may differ. The Rhino project was started at Netscape in 1997. So in the fall of 1998, Rhino added an interpretive mode. Rhino was released to Mozilla Foundation in April 1998. Dịch. Autodesk Revit Architecture. Autodesk Revit is Building information modeling software for architects, structural engineers, MEP engineers, designers and contractors. 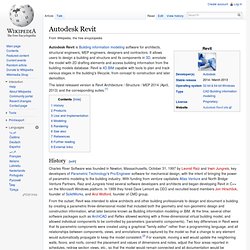 It allows users to design a building and structure and its components in 3D, annotate the model with 2D drafting elements and access building information from the building models database. Revit is 4D BIM capable with tools to plan and track various stages in the building's lifecycle, from concept to construction and later demolition. The latest released version is Revit Architecture / Structure / MEP 2014 (April, 2013) and the corresponding suites.[1] History[edit] Charles River Software was founded in Newton, Massachusetts, October 31, 1997 by Leonid Raiz and Irwin Jungreis, key developers of Parametric Technology's Pro/Engineer software for mechanical design, with the intent of bringing the power of parametric modeling to the building industry. The software was initially offered only as a monthly rental, with no option to purchase. Products[edit] Google Dịch. Dịch. Grasshopper 3d. Grasshopper™ is a visual programming language developed by David Rutten at Robert McNeel & Associates.[1] Grasshopper runs within the Rhinoceros 3D CAD application. 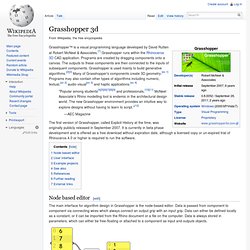 Programs are created by dragging components onto a canvas. The outputs to these components are then connected to the inputs of subsequent components. 3D rendering. 3D rendering is the 3D computer graphics process of automatically converting 3D wire frame models into 2D images with 3D photorealistic effects or non-photorealistic rendering on a computer. 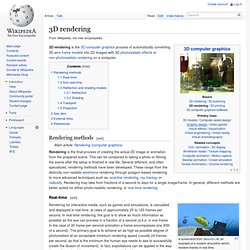 3D modeling. In 3D computer graphics, 3D modeling is the process of developing a mathematical representation of any three-dimensional surface of object (either inanimate or living) via specialized software. 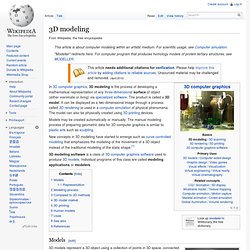 The product is called a 3D model. It can be displayed as a two-dimensional image through a process called 3D rendering or used in a computer simulation of physical phenomena. The model can also be physically created using 3D printing devices. Models may be created automatically or manually. Graphic design. Graphic design is the methodology of visual communication, and problem-solving through the use of type, space and image. 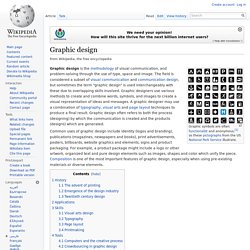 The field is considered a subset of visual communication and communication design, but sometimes the term "graphic design" is used interchangeably with these due to overlapping skills involved. Graphic designers use various methods to create and combine words, symbols, and images to create a visual representation of ideas and messages. A graphic designer may use a combination of typography, visual arts and page layout techniques to produce a final result. Graphic design often refers to both the process (designing) by which the communication is created and the products (designs) which are generated. Comparison of 3D computer graphics software. 3D computer graphics software refers to programs used to create 3D computer-generated imagery. 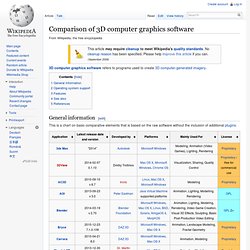