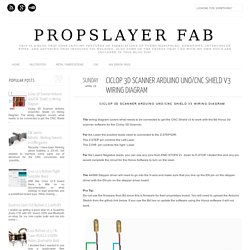 For the Laser the positive leads need to connected to the Z.STEP/DIR: The Z.STEP pin controls the Left Laser The Z.DIR pin controls the right Laser For the Lasers Negative leads, you can use any pins from END STOPS Z+ down to E-STOP. The A4988 Stepper driver will need to go into the X-axis and make sure that you line up the EN pin on the stepper driver with the EN pin on the stepper driver board. Pro Tip: Do not use the firmware from Bd since this is firmware for their proprietary board. Hardware Parts List: Total Cost Not Including Power Supply: 39.73 Total Cost including variable voltage power supply: 89.43 Software: Horus Arduino Uno FirmwareHorus 3D Scanning SoftwareTotal Cost: Free Thingiverse Files For 3d Printed Parts: Total Cost: Files are free and what ever Filament Costs.

Most affordable laser scanner on the market. Home - FabScanPi. The Media Computing Group : Back to FabScan Bachelor's thesis by Mario Lukas, supervised by René Bohne. 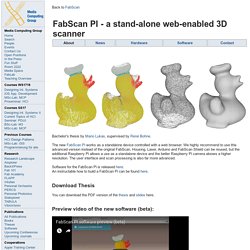 The new FabScan Pi works as a standalone device controlled with a web browser. We highly recommend to use this advanced version instead of the original FabScan. Housing, Laser, Arduino and FabScan Shield can be reused, but the additional Raspberry Pi allows a use as a standalone device and the better Raspberry Pi camera aloows a higher resolution. The user interface and scan processing is also far more advanced. 3D scanning is made easy with this DIY 3D printed 3D scanner. Mar 20, 2016 | By Alec Theoretically, a 3D scanners and 3D printers are a perfect match. 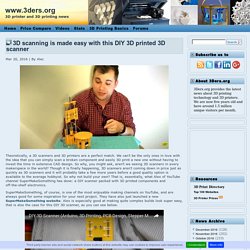 We can’t be the only ones in love with the idea that you can simply scan a broken component and easily 3D print a new one without having to invest the time in extensive CAD design. So why, you might ask, aren’t we seeing 3D scanners in every makerspace in the world? Though it is finally happening, 3D scanners aren’t coming down in price just as quickly as 3D scanners and it will probably take a few more years before a good quality option is available to the average hobbyist. So why not build your own? SuperMakeSomething, of course, is one of the most enjoyable making channels on YouTube, and are always good for some inspiration for your next project. If you can’t avoid the temptation, you’ll be happy to know it essentially consists of nothing more than a few off-the-shelf electronic components, with an infrared sensor acting as the main scanner. 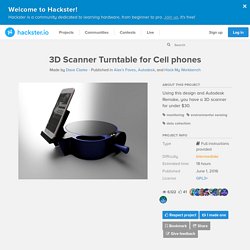 The idea is that you use your phones onboard camera to take the pictures while the turn table rotates. This is acheived by using the headphones that were supplied new in the box. The volume controllers trigger the camera remotely, taking 50 pictures for every complete rotation of the turntable. You simply slide your headphone volume controller in here. This is held in place by a stopper as part of the design. There is a hole for the headphone jack, post this through and plug into your phone. The phone cradle is removeable in case you need to move the phone further away for larger objects. 3Digify Technologies. MakerScanner - open source 3d scanning. Sub 30$ 3D laser scanner Open harware/software project by Ferretti. *update French calibration available on github i've adden a instructable to explain how to build, calibrate and use the sardauscan. update: V0.0.0.4 out : (much) faster better stronger Sardauscan is a open source Sub 30$ 3D laser scanner that you can easely print yourself.

Even 12$ if you already have a hercule HD twist. I think we can say it's "the cheaper 3d scaner on earth" you just need a arduino nano, 1 to 4 line laser and a micro geared stepper (28BYJ-48) (see instruction for BOM) FreeLSS: The Free 3D Printable Laser Scanning System For the Raspberry Pi.

5 DIY 3D Scanners to Watch. Spinscan In 2011, 3D printing genius Tony Buser released the Spinscan, an open source 3D scanner based on a laser and a digital camera. 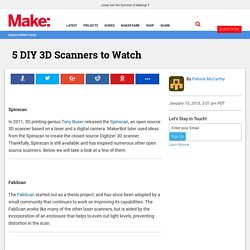 MakerBot later used ideas from the Spinscan to create the closed source Digitizer 3D scanner. Thankfully, Spinscan is still available and has inspired numerous other open source scanners. Below we will take a look at a few of them. FabScan The FabScan started out as a thesis project, and has since been adopted by a small community that continues to work on improving its capabilities.

We will continue to keep an eye out for new DIY scanners as they emerge. FreeLSS: The Free 3D Printable Laser Scanning System For the Raspberry Pi.