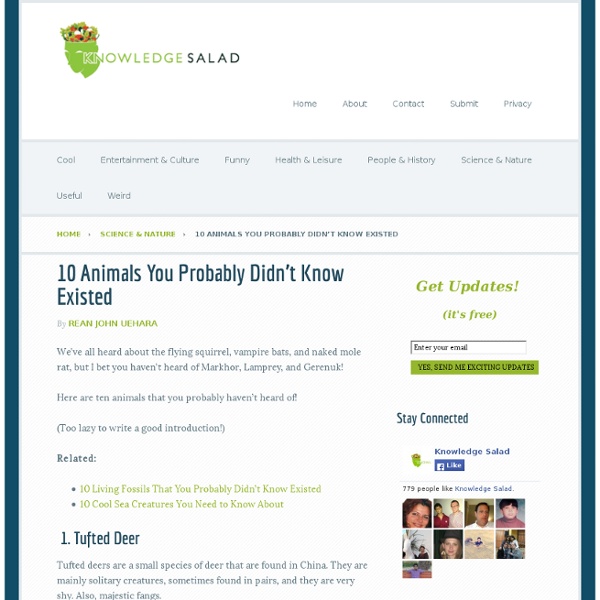 We’ve all heard about the flying squirrel, vampire bats, and naked mole rat, but I bet you haven’t heard of Markhor, Lamprey, and Gerenuk! Here are ten animals that you probably haven’t heard of! (Too lazy to write a good introduction!) Related: 1. Tufted Deer Tufted deers are a small species of deer that are found in China. 2. Star-nosed moles are small moles found in eastern Canada and United States along wet and low areas. 3. Southern right whale dolphins are small species found in cool waters far south. 4. Raccoon Dogs, or Tanuki, are found in East Asia. 5. Patagonian Maras are large rodents found in parts of Argentina. Relevant: 5 Members Of The Animal Kingdom That Will Blow Your Mind 6. Markhors are large species of wild goats that are found in Afghanistan and Pakistan. 7. Maned Wolves are found in South America. 8. Lampreys are the spawn of hell. 9. Gerenuks are long-necked species of antelopes found in Eastern Africa. 10. Amazonian Royal Flycatchers are found in the Amazon.

Q&A: New Spider Weaves Spider-Shaped Web Wildlife biologist Phil Torres recently discovered a new species of spider in the Amazon that would take first prize at any costume party. This tiny five-millimeter-long spider builds a decoy spider around five times its size to scare off potential predators. After describing his find on his blog, Torres sat down with Weird & Wild to share the story of how he came to find this new species of spider. Q: How did you first spot this spider? A: I was at the Tambopata Research Center in Peru (map), which is a ten-hour canoe ride from the nearest town. Oh They’re So Surprised! Oh They’re So Surprised! Posted by SHMO on November 5, 2012 · 124 Comments What if the animal kingdom could understand the dramatic presidential election?

Simple Animal Facts To Brighten Your Day Cows have best friends. A group of flamingos is called a “flamboyance.” Millions of trees grow every year thanks to squirrel’s forgetting where they put their nuts. There are two kittens in this picture, baby bunnies are called kits, which is short for kitten. Butterflies can taste with their feet. Sea otters hold each other’s paws when they sleep so they don’t drift apart. Largest Web-Spinning Spider Found October 21, 2009 Meet the newest odd couple of the animal kingdom: the giant female and tiny male of the largest web-spinning spider known to science: Nephila komaci. The female of the species has a leg span of up to 5 inches (12 centimeters), while the male—which spends much of its time clambering on its partner's back—barely reaches an inch (2.5 centimeters), a new study says. Part of a well-known group of golden orb-weaver spiders—which can spin webs up to three feet (one meter) wide—N. komaci was first identified in a South African museum collection in 2000. But it wasn't until a 2007 field survey, which discovered three individuals in South Africa's Tembe Elephant Park, that scientists knew the spider still existed in the wild.

Beautiful And Bizarre Translucent Snail Discovered In Croatia Deep in one of the deepest caves in the world, a cave that reaches more than 4,500 feet below ground, scientists made a startling discovery: a new species of snail with a near-transparent shell. Zospeum tholussum, an air-breathing land snail, is a brand-new entry in the Ellobiidae family of hollow-shelled snails. It's very tiny, with a swirled, translucent dome-shaped shell. This type of snail, living as it does thousands of feet below ground, has totally adapted to live in darkness; it seems to have no visual sense, for example, which is a common mutation. Art Forums - A Singular Creation Art Community We would like to ing you this feature tutorial by Linda Bergkvist, renowned in the digital arts community for her gorgeous portrayal of characters. In this tutorial, Linda shows us step by step how she paints realistic eyes. About Linda Bergkvist Linda Bergkvist is a renowned digital artist who currently lives in Sweden. Linda Bergkvist's website can be found at www.furiae.com.

That's sooo Cute! Design Art Cartoons Cars About Follow RSS Advertise Search LIL BUB BUB is a very special one of a kind critter. More specifically, she is the most amazing cat on the planet. Discovered as the runt of a healthy feral litter in a tool shed in rural Indiana, she was taken in as a rescue when it was clear that she would require special care. BUB was born with a multitude of genetic anomalies which all add up to one of nature’s happiest accidents.

Neptune Pine Is A First Standalone Android Smartwatch [CES 2014] The Neptune Pine smartwatch which started as a Kickstarter project in February last year and it seems the $100,000 funded for Kickstarter project did played out the promise to produce the first standalone Android smartwatch. The Neptune Pine comes with what we expect in a smartwatch i.e a camera, calling , texting and other sharing functions. The Neptune Pine is powered by a dual-core Snapdragon S4 processor clocked at 1.2GHz and a 512MB of RAM. The Neptune Pine features a 2.4-inch TFT touch display with a resolution of 320 x 240 pixels, a 5MP rear-facing camera, a VGA front-facing camera (both front and rear camera features an LED Flash) and an internal memory storage with the option of 8/16/32GB. Other connectivity features include Wi-Fi 802.11 b/g/n, GPS, Bluetooth 4.0, USB 2.0 support, NFC as well as a micro SIM slot to use like a smartphone.