How to Make Root Beer, Root Beer Recipe. In the fall, the plants return their vital energy to their roots as they prepare for the cold, dormant winter. 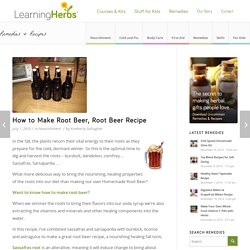 So this is the optimal time to dig and harvest the roots – burdock, dandelion, comfrey… Sassafras, Sarsaparilla… What more delicious way to bring the nourishing, healing properties of the roots into our diet than making our own Homemade Root Beer? Want to know how to make root beer? When we simmer the roots to bring their flavors into our soda syrup we’re also extracting the vitamins and minerals and other healing components into the water. In this recipe, I’ve combined sassafras and sarsaparilla with burdock, licorice and astragulus to make a great root beer recipe, a nourishing healing fall tonic. Sassafras root is an alterative, meaning it will induce change to bring about health. Sarsaparilla will help purify the blood and also tone the urino-gential tract and the nervous system. Virgil's Special Edition Bavarian Nutmeg Root Beer — TheSodaJerks.net. I’ve never officially reviewed Virgil’s Root Beer, pretty much because one of us would take care of one beverage at a time, however, being that it’s a new year of The Soda Jerks, this will be our first beverage that we both review. 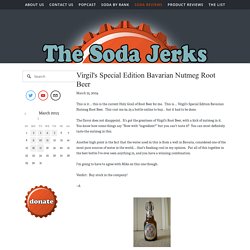 First of all the bottle. I mean, look at it. This is obviously the real deal here. Can you believe I’m going to give points to a drink for being “fun to open?” Secondly, the water. Whatever is in the water it’s got a very crisp taste, just like the original. The other difference is the price. I’m scoring this the same as the original because the price balances out the slight advantages it has over the original. Verdict: Buy stock in the company! Root Beer Recipe. What to buy: Most of the ingredients are available in the bulk section of a good health food store or herbal medicine shop. 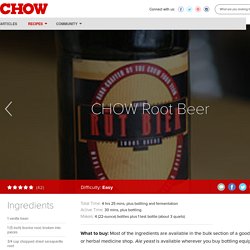 [Photograph: Marcia Simmons] Until I was 13, I was convinced that root beer was alcoholic. 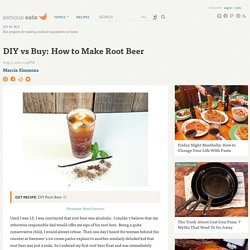 I couldn't believe that my otherwise responsible dad would offer me sips of his root beer. Being a quite conservative child, I would always refuse. Then one day I heard the woman behind the counter at Swensen's ice cream parlor explain to another similarly deluded kid that root beer was just a soda. So I ordered my first root beer float and was immediately smitten.

Many of the most delicious drinks got their start as medicinal tonics, so it's no surprise that the first commercial root beer was developed by a pharmacist in the late 19th century. What's Available to Buy? Root beer in general isn't hard to find, of course, but some of the regional or small-batch brands can be tricky to track down. Why DIY? How to make craft brewed root beer from scratch. No Extracts! Down to the Root: Make Your Own Root Beer. At some point, you may look at your brewing equipment and wonder what else you can do with it besides making beer. 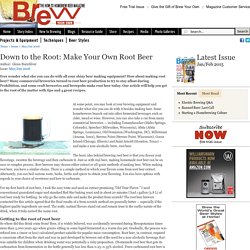 Some homebrewers branch out into other fermented beverages such as cider, mead or wine. However, you can also take a cue from many commercial breweries — including Tommyknocker (Idaho Springs, Colorado), Sprecher (Milwaukee, Wisconsin), Abita (Abita Springs, Louisiana), Old Dominion (Washington, DC), Millstream (Anama, Iowa), Stevens Point (Stevens Point, Wisconsin), Goose Island (Chicago, Illinois) and Saint Arnold (Houston, Texas) — and make a non-alcoholic brew, root beer.The basic idea behind brewing root beer is that you choose your flavorings, sweeten the beverage and then carbonate it. 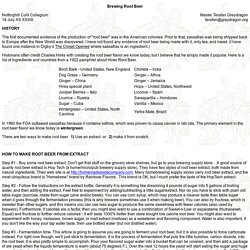 Prior to that, sassafras was being shipped back to Europe after the New World was discovered. I have not found any evidence of root beer being made with it, only tea, and mead. (I have found one instance in Digby’s The Closet Opened where sassafras is an ingredient.) Historians often credit Charles Hires with creating the root beer flavor we know today, but I believe that he simply made it popular. In 1960 the FDA outlawed sassafras because it contains safrole, which was proven to cause cancer in lab rats.