Massive sunfish found in Mediterranean Sea brought momentarily onboard fishing vessel for scientific inspection. Marine biologist Enrique Ostale could not believe his eyes when he saw the enormous sunfish tangled in the nets of a tuna-fishing boat off the Mediterranean coast of Ceuta earlier this month. 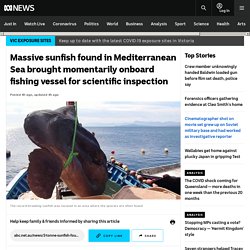 Key points: Scientists carefully manoeuvred the sunfish aboard their boat to take measurements and DNA samplesA marine biologist says he had read about sunfish growing to this size but never thought he would touch one so large The fish was returned to the water smoothly after being untangled from fishing nets The mammoth sunfish, a species classed as vulnerable and not eaten in Europe, was 3.2 metres long and 2.9 metres wide, Mr Ostale said in an interview on Thursday. Children's audiobooks are growing in popularity. How useful are they for kids learning to read? For Gemma Beriman, nothing beats reading to her two sons, Hudson and Bodhi, at bedtime. 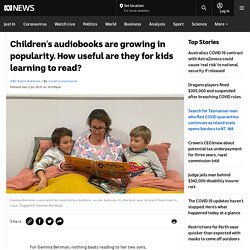 She's never been tempted to hand over those duties to a famous actor in a faraway recording studio. But Ms Beriman, a high school teacher, does believe audiobooks can have a place in a child's life. "[They are] definitely useful in some situations, particularly if you're travelling or have reluctant readers," she says. A booming audiobook industry suggests there are plenty of others who agree. But can the reassuring voices of Stephen Fry, Kate Winslet or David Tennant help young children to grasp the foundations of literacy?

Report shows thousands of school students in NSW speak English as a second language. Like many teenagers, Fatima Adeli wants to go to university when she finishes Year 12. 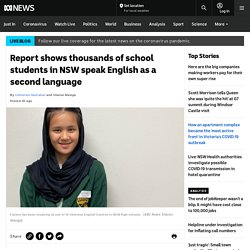 But, to get there, the 15-year-old has needed extra help with English, having arrived in Australia from Afghanistan last year. "My journey, like many other girls, has been tough but Australia has given me a new hope," the year 10 student from Western Sydney said. Fatima is among 190,000 NSW school students — or one in four — who need support to learn English as a second language, according to a report from NSW Education. The report, from the Centre for education statistics and evaluation, found the group who are learning to speak, read and write English as an additional language or dialect (EAL/D) has grown by 33,000 students since 2015.

Learning to read made life 'so much better', actor and former footballer Ian Roberts says. For Ian Roberts, the most terrifying moment at his Sydney primary school in the 1970s, was having to stand up and read. 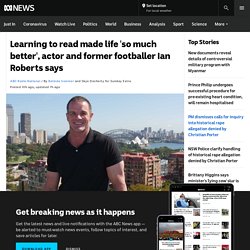 "I remember this truly sickly feeling," the former representative rugby league footballer tells RN's Sunday Extra. He says that although he was "100 per cent with numbers", when it came to reading and spelling, he "fell through the gaps of the education system". "K and C sounded the same, why were they different? Language was always confusing," he says. "I used to ask the teachers, 'Why, why, why? '" La Trobe University SOLAR Lab aims to improve phonics teaching in education degrees - ABC News.

Learning to read isn't as easy as learning to talk, because it is not an innate ability — it has to be taught. 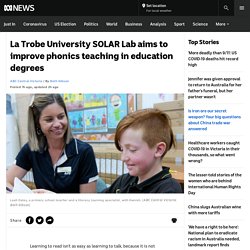 At least, that's the battle cry of phonics advocates on one side of the 'reading wars'. If you turn the debate book over, you'll find other literacy experts who disagree and believe that reading is a natural ability. But with student literacy levels falling across all states last year, both sides concede that it is time for a rethink on how trainee teachers are being instructed to teach Australian children to read — because they are clearly struggling. 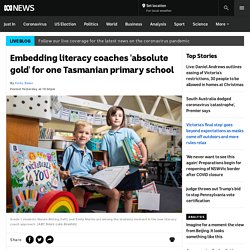 Key points: Almost half of Tasmanian adults are functionally illiterate, meaning they don't have the literacy or numeracy skills needed to function in a technology-driven worldIn 2016, Hobart's Rosetta Primary realised some of its students were not improving as they shouldSince introducing a new method of teaching, some students' tests show more than a year of learning in just 12 months. It's its: Understanding the rules of apostrophes, and the exceptions - ABC News. Copywriter Simon Griffin thought he knew the rules of apostrophes, until he tried to explain them and discovered there are exceptions to every rule. 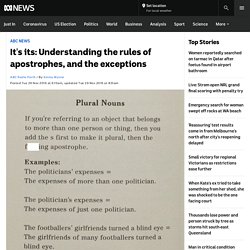 Like many people, Mr Griffin was becoming increasingly frustrated by the apostrophe mistakes he was seeing at work and on social media. "I was working with some designers and one or two of them would remove apostrophes from headlines because they didn't look nice, so I explained that if they removed an apostrophe it changed the meaning of the words," he told Gillian O'Shaughnessy on 720 ABC Perth. Why I can't be angry with my teenager for swearing (artfully) - ABC News. Why handwritten letters are becoming more precious in an increasingly digital world. Updated about an hour agoThu 26 Dec 2019, 9:45pm The most expensive pen I ever sold was about $2,500. 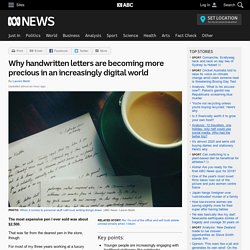 Key points: Younger people are increasingly engaging with traditional stationery like notebooksHandwriting, and in particular journaling, is a good way to practise mindfulnessRefillable fountain pens are more sustainable than disposable ballpoints That was far from the dearest pen in the store, though. For most of my three years working at a luxury writing shop in Perth, the most expensive pen was the Mont Blanc Marlene Dietrich, a special-edition fountain pen in commemoration of the actress. It had an 18-carat solid gold nib (of course), inlaid mother-of-pearl on the top of the cap and a diamond adorning the clip, which was shaped like the ties of which its namesake was so fond. First library in Victoria to open 24 hours a day, seven days a week has town buzzing. 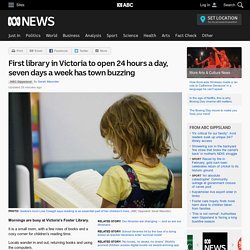 Key points: The first library in Victoria giving 24/7 access has dozens of members sign up in a monthWest Gippsland Libraries says the round-the-clock access better suits the community because most people work more than 35 hours a weekMembers say it gives more freedom to be able to visit the library outside of traditional hours. Widgit SymbolWorld: Categories : index. Word Games Word Morphs Worksheets. Multiple Intelligences. Cryptic crosswords too confusing? Decipher them with these seven common clue recipes. 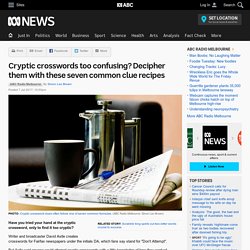 Sans Forgetica font makes readers remember text by being harder to read. Updated Fri at 11:32amFri 5 Oct 2018, 11:32am In an age of information overload, it's good to have some memory hacks up your sleeve. The font's reader-unfriendly gaps and slants make the brain work harderIt is not designed to be used for large blocks of textThe font is a result of psychology and design research And text in its multitude of applications has become a style destination in its own right. Now a team of experts have developed a font specifically designed to help you remember things, aptly named Sans Forgetica. Sans Forgetica. Should you be using 'less' or 'fewer'? - RN. Posted As anyone who writes "Oxford comma enthusiast" in their Twitter bio will gladly tell you, English possesses quite a few rules.

One of these rules revolves around when it is correct to use less, and when it is correct to use fewer. Here is the rule as it is often expressed: Fewer refers to numbers of things. Less refers to quantities of things. For most style guides, this is about as far as the issue is usually pursued. Antigrams. Australia shoots up international rankings in reading among Year 4 students.

Posted Australia has shot up the international rankings in reading, reversing a decade of underperformance in literacy achievement in the country's schools. Key points: Australia's Year 4 students ranked 21 out of 50 countries for reading, up six places since the last study in 2011Australia outperformed countries including France, New Zealand and SpainFederal Education Minister says the results indicate teacher and school reforms are paying off The Progress in International Reading Study (PIRLS) ranked Australia 21 out of 50 countries among Year 4 students. This is up from a ranking of 27 when the last study was done in 2011. Singapore and Russia were the stand-out international performers in reading, the study found. Northern Ireland, England, Ireland and Poland were all in the top band of performance. Australia fell in the middle band, along with the USA and Canada, but outperformed other countries including France, New Zealand and Spain. Getting boys to love literature and reading: One school's bid to improve English results.

In other words, it is a compound sentence with a dependent, or subordinate clause. Examples of Compound Complex Sentences: English Grammar 101 - Clauses, Lesson 9: Complex and Compound-Complex Sentences. Before we arrived at school, we met up at the coffee house across the street. SMART Teaching Strategies. Cohesion in texts includes the use of connectives and conjunctions and more sophisticated texts effectively use a variety of referring words, substitutions, word associations and text connectives to improve the flow of the writing. It refers to the use of linguistic devices to join sentences together, including conjunctions, reference words, substitution and lexical devices such as repetition of words (or synonyms), collocations and lexical groups. Students need to connect ideas in logical ways in order to display and build precise factual knowledge, develop their ideas to persuade more convincingly and express more complex relationships in their speech and writing.

BoomWriter - Teacher Login. List of Adverbs. Home. Catalog your books online. Most literate nation in the world? Not the U.S., new ranking says. Literably Is An Excellent Reading Site — If Used With Caution. Why is English so hard to learn? Schools need advice on how to help students with reading difficulties. Why some kids can’t spell and why spelling tests won’t help. English Grammar Lessons for Teachers and Students. Dictionary Stories — Wait, what? Free English Worksheets.