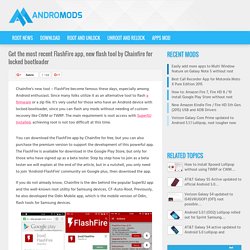 Since many folks utilize it as an alternative tool to flash a firmware or a zip file. It’s very useful for those who have an Android device with locked bootloader, since you can flash any mods without needing of custom recovery like CWM or TWRP. The main requirement is root access with SuperSU installed, achieving root is not too difficult at this time. You can download the FlashFire app by Chainfire for free, but you can also purchase the premium version to support the development of this powerful app. The FlashFire is available for download in the Google Play Store, but only for those who have signed up as a beta tester. 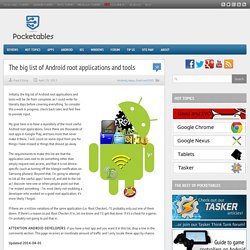 So consider this a work in progress, check back later, and feel free to provide input. My goal here is to have a repository of the most useful Android root applications. Since there are thousands of root apps in Google Play, and tons more that never make it there, I will count on some input from you for things I have missed or things that should go away. The requirements to make this list are that the application uses root to do something other than simply request root access, and that it is not device-specific (such as turning off the triangle notification on Samsung phones). If there are a million variations of the same application (i.e. ATTENTION ANDROID DEVELOPERS: if you have a root app and you want it in this list, drop a line in the comments section.

Updated 2014-04-01 Android root applications and tools Backup Titanium Backup. WiFi. Root Without PC App: Top 8 Android Rooting Apk for all Devices. We have discussed about 9 free software apps to root with/without PC in our previous article but thought it wise to present the best performing ones in the right category. 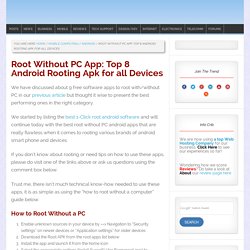 We started by listing the best 1-Click root android software and will continue today with the best root without PC android apps that are really flawless when it comes to rooting various brands of android smart phone and devices. If you don’t know about rooting or need tips on how to use these apps, please do visit one of the links above or ask us questions using the comment box below.

Trust me, there isn’t much technical know-how needed to use these apps, it is as simple as using the “how to root without a computer” guide below. How to Root Without a PC 1. iRoot APK iRoot is usually my first choice when it comes to rooting with or without a computer, I have had tremendous success with it on different brands of phone including Tecno, Samsung, Gionee, Itel, Infinix, Sony, mercury and several others. 2. 3 Framaroot APK 4. 5. 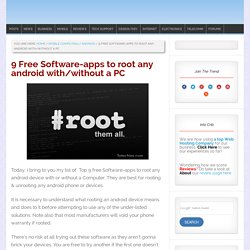 They are best for rooting & unrooting any android phone or devices. It is necessary to understand what rooting an android device means and does to it before attempting to use any of the under-listed solutions. Note also that most manufacturers will void your phone warranty if rooted. There’s no risk at all trying out these software as they aren’t gonna brick your devices. You are free to try another if the first one doesn’t root your phone and/or devices. You just need do us a favor by reporting the model of your phone/device and what software among our list that was able to root it. One stop for tweaks and other useful cool stuff. Root Guide - JRummy AppsJRummy Apps. Root is the user name or account that by default has access to all commands and files on a Linux or other Unix-like operating system. 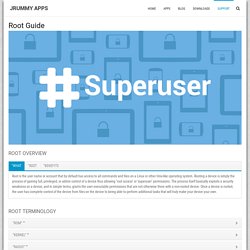 Rooting a device is simply the process of gaining full, privileged, or admin control of a device thus allowing ‘root access’ or ‘superuser’ permissions. The process itself basically exploits a security weakness on a device, and in simple terms, grants the user executable permissions that are not otherwise there with a non-rooted device. Once a device is rooted, the user has complete control of the device from files on the device to being able to perform additional tasks that will truly make your device your own. A rooted device has access to the whole of Android’s file system. Running as superuser, a process can change any files on your device.

Once your device is rooted the possibilities are endless.