Acetylene. Acetylene (systematic name: ethyne) is the chemical compound with the formula C2H2. It is a hydrocarbon and the simplest alkyne.[3] This colorless gas is widely used as a fuel and a chemical building block. It is unstable in pure form and thus is usually handled as a solution.[4] Pure acetylene is odorless, but commercial grades usually have a marked odor due to impurities.[5] Discovery[edit] Acetylene was discovered in 1836 by Edmund Davy, who identified it as a "new carburet of hydrogen".[7] It was rediscovered in 1860 by French chemist Marcellin Berthelot, who coined the name "acetylene".

Berthelot was able to prepare this gas by passing vapours of organic compounds (methanol, ethanol, etc.) through a red-hot tube and collecting the effluent. Chloroprene. Chloralkali process. Old drawing of a chloralkali process plant (Edgewood, Maryland) The chloralkali process (also chlor-alkali and chlor alkali) is an industrial process for the electrolysis of sodium chloride solution (brine). Depending on the method, several products besides hydrogen can be produced. If the products are separated, chlorine and sodium hydroxide (caustic soda) are the products; by mixing, sodium hypochlorite or sodium chlorate are produced, depending on the temperature. Higher temperatures are needed for the production of sodium chlorate instead of sodium hypochlorite.

Industrial scale production began in 1892. When using calcium chloride or potassium chloride, the products contain calcium or potassium instead of sodium. Castner–Kellner process. History[edit] Process details[edit] Castner–Kellner apparatus The reaction at anode (A) is: 2Cl– → Cl2 + 2e– The chlorine gas that results vents at the top of the outside cells where it is collected as a byproduct of the process. 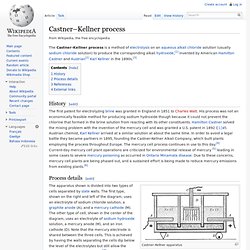 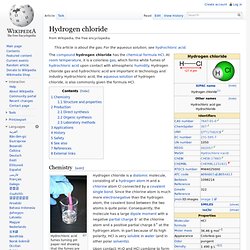 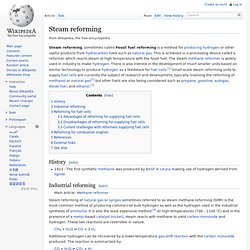 This is achieved in a processing device called a reformer which reacts steam at high temperature with the fossil fuel. The steam methane reformer is widely used in industry to make hydrogen. Phosphogypsum (5 CaSO4 · 2 H2O) impurities. Phosphogypsum refers to the gypsum formed as a by-product of processing phosphate ore into fertilizer with sulfuric acid. 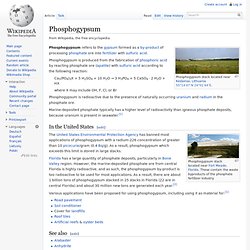 Phosphogypsum is produced from the fabrication of phosphoric acid by reacting phosphate ore (apatite) with sulfuric acid according to the following reaction: Ca5(PO4)3X + 5 H2SO4 + 10 H2O → 3 H3PO4 + 5 CaSO4 · 2 H2O + HX where X may include OH, F, Cl, or Br Phosphogypsum is radioactive due to the presence of naturally occurring uranium and radium in the phosphate ore. Nitrophosphate process (H3PO4) The nitrophosphate process (also known as the Odda process) was a method for the industrial production of nitrogen fertilizers invented by Erling Johnson in the city of Odda, Norway around 1927. 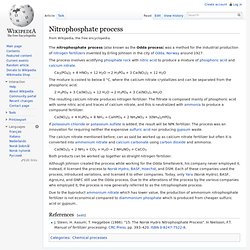 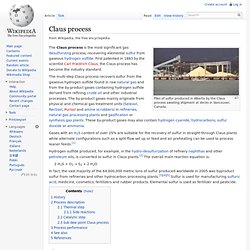 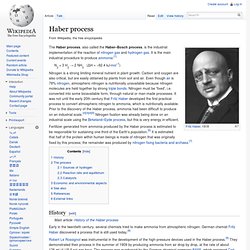 It is the main industrial procedure to produce ammonia:[1] Nitrogen is a strong limiting mineral nutrient in plant growth. Carbon and oxygen are also critical, but are easily obtained by plants from soil and air. Even though air is 78% nitrogen, atmospheric nitrogen is nutritionally unavailable because nitrogen molecules are held together by strong triple bonds. Nitrogen must be 'fixed', i.e. converted into some bioavailable form, through natural or man-made processes.

Formaldehyde. Formaldehyde is a naturally-occurring organic compound with the formula CH2O. 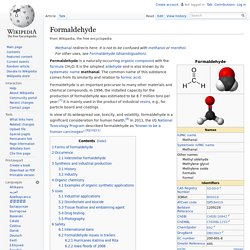 It is the simplest aldehyde and is also known by its systematic name methanal. The common name of this substance comes from its similarity and relation to formic acid. Formaldehyde is an important precursor to many other materials and chemical compounds. In 1996, the installed capacity for the production of formaldehyde was estimated to be 8.7 million tons per year.[7] It is mainly used in the product of industrial resins, e.g., for particle board and coatings.

In view of its widespread use, toxicity, and volatility, formaldehyde is a significant consideration for human health.[8] In 2011, the US National Toxicology Program described formaldehyde as "known to be a human carcinogen".[9][10][11] Glycolic acid. Glycolic acid (or hydroxyacetic acid) is the smallest α-hydroxy acid (AHA). 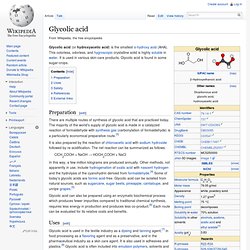 This colorless, odorless, and hygroscopic crystalline solid is highly soluble in water. It is used in various skin-care products. Glycolic acid is found in some sugar-crops. Preparation[edit] E is for Ecstasy. Bibliography by Alexander Shulgin. 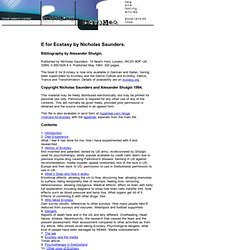 Published by Nicholas Saunders, 14 Neal's Yard, London, WC2H 9DP, UK. ISBN: 0 9501628 8 4. Published May 1993. 320 pages. The book E for Ecstasy is now only available in German and Italian, having been superceded by Ecstasy and the Dance Culture and Ecstasy, Dance, Trance and Transformation. Details of availability are on ecstasy.org Copyright Nicholas Saunders and Alexander Shulgin 1994. This material may be freely distributed electronically, but may be printed for personal use only.

Performance Test for Novel Hot-Metal Production Route. One year after the startup of the second Corex module at the Chinese steelmaker Baosteel in Shanghai, a successful performance test has now proven the economy efficiency of this alternative technology for the production of hot metal. After the successful, the Final Acceptance Certificate has also been signed by Baosteel. “As opposed to the conventional blast-furnace route, the Corex production costs are substantially lower,” Dieter Siuka, responsible for worldwide iron production at Siemens Metals Technologies, explained. Less expensive and locally available raw materials yield the same quality of hot metal as higher-quality imports. Alchemical substances. Päihdelinkki. Prosessitekniikan yksikk prosessit. Rosin. A cake of rosin, made for use by violinists, used here for soldering Uses[edit] Rosin can be used as a glazing agent in medicines and chewing gum. Betuliini. Betuliini eli betulinoli eli lup-20(29)-ene-3β,28-dioli on lupaani-runkoinen (C30H52) pentasyklinen triterpeenialkoholi.