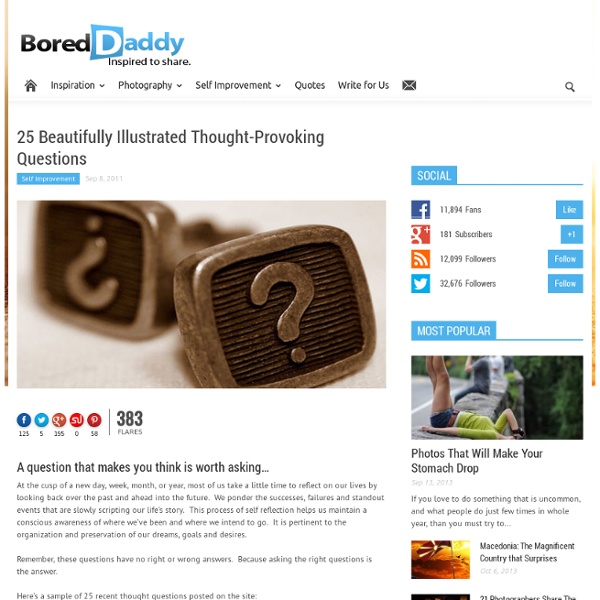 405 Flares Facebook 137 Twitter 5 Google+ 194 StumbleUpon 1 Pin It Share 68 68 405 Flares × A question that makes you think is worth asking… At the cusp of a new day, week, month, or year, most of us take a little time to reflect on our lives by looking back over the past and ahead into the future. We ponder the successes, failures and standout events that are slowly scripting our life’s story. This process of self reflection helps us maintain a conscious awareness of where we’ve been and where we intend to go. It is pertinent to the organization and preservation of our dreams, goals and desires. Remember, these questions have no right or wrong answers. Here’s a sample of 25 recent thought questions posted on the site: Few extra questions Thank you for visiting, we hope you find our site, enjoyable, informative and educational.

10 More Common Faults in Human Thought Humans This list is a follow up to Top 10 Common Faults in Human Thought. Thanks for everyone’s comments and feedback; you have inspired this second list! It is amazing that with all these biases, people are able to actually have a rational thought every now and then. There is no end to the mistakes we make when we process information, so here are 10 more common errors to be aware of. The Most Beautiful and Famous Trees on Earth “A tree is a wonderful living organism which gives shelter, food, warmth and protection to all living things. It even gives shade to those who wield an axe to cut it down” – Buddha. There are probably hundreds of majestic and magnificent trees in the world – of these, some are particularly special: Lone Cypress in Monterey

Mark Twain Gives Nine Tips for Living an Extraordinary Life by Henrik Edberg Is truth stranger than fiction? Perhaps. 50 of the World's Best Breakfasts – Written by Victoria Philpott Not quite had your fill of breakfasts just yet? Check out our beautifully visual list of the 30 best breakfasts from around the world. Plan your next culinary adventure or just get a little adventurous with breakfast at the weekend. Salivating. That’s the only way to describe me after looking at all this food porn. Best Teacher I Ever Had Best Teacher I Ever Had by David Owen Extracted from Reader's Digest (Asian Edition), April 1991, pp. 47-48. Mr. Whitson taught sixth-grade science. On the first day of class, he gave us a lecture about a creature called the cattywampus, an ill-adapted nocturnal animal that was wiped out during the Ice Age.

101 Most Inspiring Quotes of All Time, Volume 1 by Celes on Jun 16, 2009 | ShareThis Email This Post This is volume 1 of the 101 Most Inspiring Quotes of All Time Series. Modern Pyramid House by Juan Carlos Ramos We've seen our fair share of unique modern home designs like the box-shaped metallic house or the abstract fortress made of concrete, but Mexican architect Juan Carlos Ramos has taken on a form less-visited for his aptly titled project Pyramid House—a conceptual pyramid-shaped home created and submitted as a proposal for a recent architecture competition. The simple geometric shape creates a clean aesthetic, while remaining extremely eye-catching due to its iconic though rarely applied form. Some highlights of this design are the multiple windows cut out of the four large triangular facades that allow natural light into the home. An enormous window covers one entire side of the structure that visually exposes and lightens the design. Viewers also get to see inside the modern multi-level interior which features a library, balcony, two bedrooms, and even a recording studio that have all been cleverly sectioned to fit inside this unconventional concept. Juan Carlos Ramos's website

The Quick 10: 10 Things Mark Twain Didn’t Say (and 10 he did) The man who has provided us with some of the best quips of all time is also one of the most misquoted men of all time. I guess that’s the problem with being as clever as Mark Twain – when someone hears a great witticism and has no one to attribute it to, they just assume it was Mr. Clemens. On what would have been his 175th birthday, here are 10 quotes Mark Twain likely never uttered, despite popular belief. 1. “The secret of getting ahead is getting started.” Homemade Junk Food Homemade Twix bars. Two for you, enough for everyone else. 19 Reclips 14 Likes Healthier goldfish (did you know Goldfish normally contain MSG?)