US since Wilson's 14 points

Towards a bipolar world (1945–1953) - The Cold War (1945–1989) Ressources DNL anglais. Joseph Nye: Why military power is no longer enough. Paris Peace Conference and Treaty of Versailles. The six key moments of the Cold War relived. The stand-off in Ukraine has revived memories of the Cold War, but for many under the age of 40 the events of that conflict now seem far off. 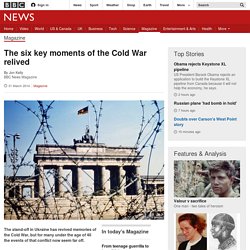 The US, UK and France were allied with the communist Soviet Union during World War Two, but as it became clear victory in the war was approaching new battle lines started to be drawn. What followed was 45 years of tension, marked by espionage and proxy wars involving client states, all undertaken with the knowledge of the nuclear catastrophe that actual war would bring. People who experienced the key events of the conflict describe how it affected them - and Cold War expert Scott Lucas, of Birmingham University and EA WorldView, explains how they fitted into the bigger picture. 1948: Berlin Airlift Joyce Hargrave-Wright was sent to Germany just before her 21st birthday in 1948 to serve with RAF air traffic control after the USSR blockaded West Berlin, cutting off supplies. 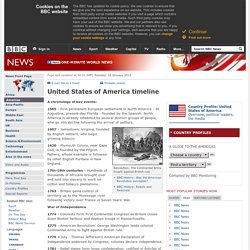 North America is already inhabited by several distinct groups of people, who go into decline following the arrival of settlers. 1607 - Jamestown, Virginia, founded by English settlers, who begin growing tobacco. 1620 - Plymouth Colony, near Cape Cod, is founded by the Pilgrim Fathers, whose example is followed by other English Puritans in New England. 17th-18th centuries - Hundreds of thousands of Africans brought over and sold into slavery to work on cotton and tobacco plantations. 1763 - Britain gains control of territory up to the Mississippi river following victory over France in Seven Years' War.

War of Independence 1774 - Colonists form First Continental Congress as Britain closes down Boston harbour and deploys troops in Massachusetts. Lesson 4: Fighting for Peace: The Fate of Wilson's Fourteen Points. In January 1918, Woodrow Wilson unveiled his Fourteen Points to the U.S. 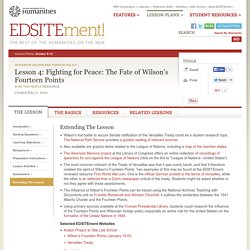 Congress. The speech was a natural extension of the proposals he had offered in his "Peace without Victory" address and his request for a declaration of war. Presuming an Allied victory, the President proposed freedom of the seas and of trade, arms reductions, and fair settlement of colonial claims and possessions. He insisted that "open covenants of peace, openly arrived at," must be the benchmark of postwar negotiations. 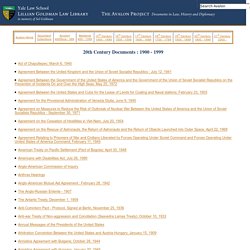 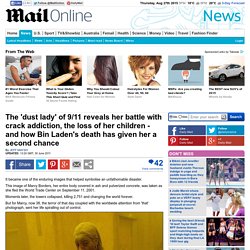 This image of Marcy Borders, her entire body covered in ash and pulverized concrete, was taken as she fled the World Trade Center on September 11, 2001. I was in that 9/11 photo Frank Rich wrote about. Here's what I think about his column. Yesterday, Slateposted this piece criticizing Frank Rich's New York Times column about the 9/11 photo shown here. 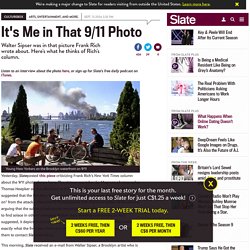 The picture was taken by Magnum photographer Thomas Hoepker on the afternoon of 9/11. Calling the image "shocking," Rich suggested that the five New Yorkers were "relaxing" and were already "mov[ing] on" from the attacks. Slate'sDavid Plotzdisputed that characterization of the picture, arguing that the subjects had almost certainly gathered to discuss the attacks and to find solace in others' company. Rather than showing callousness, as Rich suggested, it depicted civic engagement.

But since neither Rich nor Plotz knew exactly what the five New Yorkers in the photo were doing or thinking, weinvited them to contact Slateand tell us. The meaning of 9/11's most controversial photo. In the photograph Thomas Hoepker took on 11 September 2001, a group of New Yorkers sit chatting in the sun in a park in Brooklyn. 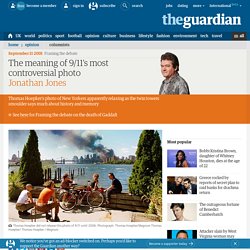 Behind them, across brilliant blue water, in an azure sky, a terrible cloud of smoke and dust rises above lower Manhattan from the place where two towers were struck by hijacked airliners this same morning and have collapsed, killing, by fire, smoke, falling or jumping or crushing and tearing and fragmentation in the buildings' final fall, nearly 3,000 people. Ten years on, this is becoming one of the iconic photographs of 9/11, yet its history is strange and tortuous. Hoepker, a senior figure in the renowned Magnum photographers' co-operative, chose not to publish it in 2001 and to exclude it from a book of Magnum pictures of that horribly unequalled day.