“Stuff No One Told Me” fun illustrations » This Blog Rules 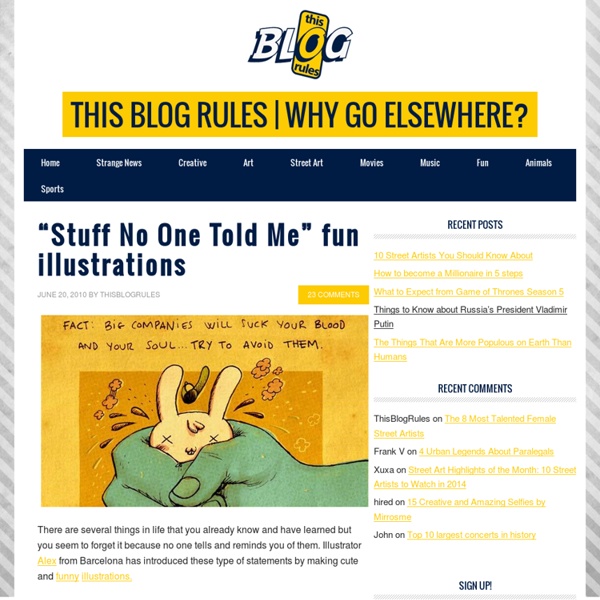 There are several things in life that you already know and have learned but you seem to forget it because no one tells and reminds you of them. Illustrator Alex from Barcelona has introduced these type of statements by making cute and funny illustrations. You will probably agree with a lot of them. Speaking of illustrations, another artist has used them to try to express how “the perfect world” could be. An illustration is a displayed visualization form presented as a drawing, painting, photograph or other work of art that is created to elucidate or dictate sensual information (such as a story, poem or newspaper article) by providing a visual representation graphically.

Crunch - Dave's Demolition Service! See more great video on the multimedia page! Video of my car running over stuff! Any requests? Want something crushed?Send me an e-mail describing an item you have whichyou would like to see crushed. Gingerbread House! See Crunch Archive for more great crunches! [Home] - [Site Map] - [Donate] - [Car Shows] - [Multimedia] - [Photos] - [Links] - [Contact] Copyright© 2003 StillRuns.com 10 Ways To Be Happy, On Purpose “He who depends on himself will attain the greatest happiness” ~Chinese Proverb I was at a Women’s Leadership Conference about a year ago and had an “ah-ha moment”. We were all introducing ourselves and asked to share a few things to help with the process. One question left me baffled and ultimately changed my life; “What do you do to make yourself happy?”. At the time I honestly didn’t know. I had a great job, friends, and family. It’s not been an easy road, but it’s been the most fulfilling adventure I’ve ever been on and I feel that I should now share what I’ve learned with others. 1. “Today you are you, that is truer than true. How many times have we heard “no one will love you until you learn to love yourself” or “nobody knows you the way you do”? So get to know the right-now-real you, both the good and the bad, and own it. The good news is that if you don’t like certain aspects of yourself right now, you have it in your control to change that. 2. “Open your eyes and look within. 3.

Фото и рисунки, арт и креативная реклама Inspiration Gallery #103 – Various quotations Most designers seek inspiration in the initial stage of a project to get their creative juices flowing and/or to get updated with the latest trends in graphic design. In this post I would like to share some of the great designs that have inspired me in some way and hopefully something will inspire you as well. Do you still think of me? Nobody dies a virgin… When life hand you lemons… Design is thinking made visual The next war… Do what you love… why americans should never be allowed to travel I had someone ask for an aisle seats so that his or her hair wouldn't get messed up by being near the window. A client called in inquiring about a package to Hawaii. After going over all the cost info, she asked, "Would it be cheaper to fly to California and then take the train to Hawaii?" I got a call from a woman who wanted to go to Capetown. I started to explain the length of the flight and the passport information when she interrupted me with "I'm not trying to make you look stupid, but Capetown is in Massachusetts. "Without trying to make her look like the stupid one, I calmly explained, "Capecod is in Massachusetts, Capetown is in Africa." A man called, furious about a Florida package we did. I got a call from a man who asked, "Is it possible to see England from Canada?" Another man called and asked if he could rent a car in Dallas. A nice lady just called. A woman called and asked, "Do airlines put your physical description on your bag so they know who's luggage belongs to who?"

38 Life Lessons I’ve Learned in 38 Years The Street Work of Banksy: British Graffiti Artist | Design Cookbook Banksy is the pseudonym of a British graffiti artist, political activist and painter, whose identity is unconfirmed. Using a unique stenciling technique Banksy’s artistic works of political and social commentary have been featured on streets, walls, and bridges of cities throughout the world. Here we’ll show you some of the best work from this international street artist Banksy. Be sure to check out Banksy.co.uk And the Online Shop Banksy.co.ukOnline Shop Sponsored Links © 2011 Design Cookbook.

Pictures and Words (Part 18) | SadAndUseless.com - StumbleUpon Previous selection of pure wisdom here. McSweeney's Internet Tendency: Thirteen Writing Prompts. [Originally published May 4, 2006.] Write a scene showing a man and a woman arguing over the man’s friendship with a former girlfriend. Do not mention the girlfriend, the man, the woman, or the argument. Write a short scene set at a lake, with trees and shit. Throw some birds in there, too. Choose your favorite historical figure and imagine if he/she had been led to greatness by the promptings of an invisible imp living behind his or her right ear. Write a story that ends with the following sentence: Debra brushed the sand from her blouse, took a last, wistful look at the now putrefying horse, and stepped into the hot-air balloon. A wasp called the tarantula hawk reproduces by paralyzing tarantulas and laying its eggs into their bodies. Imagine if your favorite character from 19th-century fiction had been born without thumbs. Write a story that begins with a man throwing handfuls of $100 bills from a speeding car, and ends with a young girl urinating into a tin bucket.

40 Tips for a Better Life | GLICH'S LIFE :: Blogging by Glenn Ong Reading tips from the Internet, I got this useful list where I personally follow some of it to help me sort of improve my day to day life. Read through it and just follow the things you want to believe. Remember, each person has his/her own needs/wants/beliefs. Take a 10-30 minute walk every day. You don’t have to win every argument. Lackadaisy Expressions Boy, I didn't know what I was getting myself into when I started this. I've had requests for some sort of expressions tutorial dating back a while now, so I figured, "Sure! I can explain expression drawing...and it'll be way better than all those tutorials out there that are nothing but charts of generic expressions. Yeah! Um. Anyway, I found all I could really do was try to explain ways to teach yourself...and then add some pictures.

28 Excellent Examples Of Typography Portraits I’m sure most of us heard of these memorable saying that goes like "A good sketch is better than a long speech" or "A picture is worth a thousand words". Sometimes, even the most complicated issue and matter can be simplified and expressed over a single image. That’s just how incredible images are; but today I want to show you something different, a hybrid of both. Here’s a showcase of a very unique approach to portrait illustrations. Burdened Barrack Obama | Dylanroscover Self Portrait | Saluum Mother Teresa | Dencii Mahatma Gandhi | Dencii John Lennon | Dencii Martin Luther King, Jr | Dencii Self Portrait | Stacy Benson Self Portrait | Stacey Grove "Screaming" | Goblina Self Portrait | Vic198x Self Portrait | Le0arts Mos Def a.k.a Dante Terrell Smith-Bey | DilsJ Lady Gaga | Skye Shettle Scott Weiland | CaliburlessSoul Erik Spiekermann | Steve Butabi Nelly Furtado | Steve Butabi Trent Reznor of Nine Inch Nails | Maxdoming Bono of U2 | CaliburlessSoul Self Portrait | Laemmen Self Portrait | Hworangi107