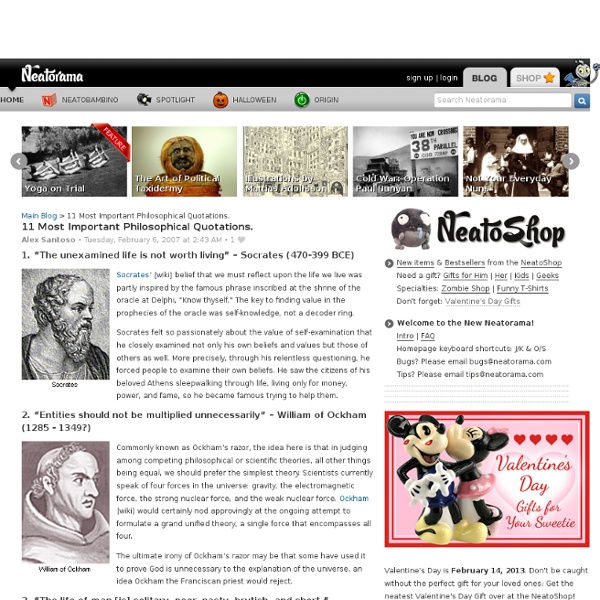 1. “The unexamined life is not worth living” – Socrates (470-399 BCE) Socrates’ [wiki] belief that we must reflect upon the life we live was partly inspired by the famous phrase inscribed at the shrine of the oracle at Delphi, “Know thyself.” The key to finding value in the prophecies of the oracle was self-knowledge, not a decoder ring. Socrates felt so passionately about the value of self-examination that he closely examined not only his own beliefs and values but those of others as well. More precisely, through his relentless questioning, he forced people to examine their own beliefs. 2. Commonly known as Ockham’s razor, the idea here is that in judging among competing philosophical or scientific theories, all other things being equal, we should prefer the simplest theory. The ultimate irony of Ockham’s razor may be that some have used it to prove God is unnecessary to the explanation of the universe, an idea Ockham the Franciscan priest would reject. 3. 4. 5. 6. 7. 8. 9. 10. 11.

Metaphysics through the Ages: from Aristotle to Lil Jon From the entire VRI team, we'd like to thank you for your support over the past 40 days. Going forward from the Kickstarter, we are now focusing our entire efforts at PantheonRotF.com. There you will be able to pledge directly to game development. For Kickstarter pledgers, nothing has been charged to you, so please feel free to resubmit your pledges at the post-Kickstarter site. Should you have any questions, our team is ready to take your questions at support@pantheonrotf.com Thank you again, from the bottom of our hearts. Come join in the development process, and we'll see you all in Terminus very soon! Pantheon: Rise of the Fallen is an MMORPG based on challenging gameplay and open world high fantasy, with a strong focus on group-oriented content. The player is a legendary Hero, stripped of his or her powerful relics and left to explore the distinct and epic regions of Terminus. "Strata! Classes 1. Races 1. Stretch Races 1. Game Features Click here for the Community Q&A Video Series

Speed reading History[edit] Psychologists and educational specialists working on visual acuity used a tachistoscope to conclude[1] that, with training, an average person could identify minute images flashed on the screen for only one five-hundredth of a second (2 ms). Though the images used were of airplanes, the results had implications for reading. Methods[edit] Skimming[edit] Another form of skimming is commonly employed by readers on the Internet. [edit] Meta guiding is the visual guiding of the eye using a finger or pointer, such as a pen, in order for the eye to move faster along the length of a passage of text. Commercial speed reading programs[edit] Speed reading programs are available through courses, both in person or software based, and manuals. One point of difference between the various speed reading courses is the assertions concerning subvocalization. Speed reading courses and books take a variety of approaches to the concept of reading comprehension. Legentas[edit] Reading Dynamics[edit]

Twelve Virtues of Rationality by Eliezer Yudkowsky by Eliezer Yudkowsky The first virtue is curiosity. A burning itch to know is higher than a solemn vow to pursue truth. To feel the burning itch of curiosity requires both that you be ignorant, and that you desire to relinquish your ignorance. The second virtue is relinquishment. The third virtue is lightness. The fourth virtue is evenness. The fifth virtue is argument. The sixth virtue is empiricism. The seventh virtue is simplicity. The eighth virtue is humility. The ninth virtue is perfectionism. The tenth virtue is precision. The eleventh virtue is scholarship. Before these eleven virtues is a virtue which is nameless. Miyamoto Musashi wrote, in The Book of Five Rings: "The primary thing when you take a sword in your hands is your intention to cut the enemy, whatever the means. Every step of your reasoning must cut through to the correct answer in the same movement. If you fail to achieve a correct answer, it is futile to protest that you acted with propriety.

Philosophy - Guide to Happiness | Top Documentary Films We tend to accept that people in authority must be right. It's this assumption that Socrates wanted us to challenge by urging us to think logically about the nonsense they often come out with, rather than being struck dumb by their aura of importance and air of suave certainty. This six part series on philosophy is presented by popular British philosopher Alain de Botton, featuring six thinkers who have influenced history, and their ideas about the pursuit of the happy life. Socrates on Self-Confidence (Part 1) - Why do so many people go along with the crowd and fail to stand up for what they truly believe? Partly because they are too easily swayed by other people's opinions and partly because they don't know when to have confidence in their own. Seneca on Anger (Part 3) - Roman philosopher Lucious Annaeus Seneca (4BCE-65CE), the most famous and popular philosopher of his day, took the subject of anger seriously enough to dedicate a whole book to the subject.

Philosophy Ideas Database the free encyclopedia Straw man A straw man, also known in the UK as an Aunt Sally,[1][2] is a common type of argument and is an informal fallacy based on the misrepresentation of the original topic of argument. To be successful, a straw man argument requires that the audience be ignorant or uninformed of the original argument. The so-called typical "attacking a straw man" implies an adversarial, polemic, or combative debate, and creates the illusion of having completely refuted or defeated an opponent's proposition by covertly replacing it with a different proposition (i.e., "stand up a straw man") and then to refute or defeat that false argument, ("knock down a straw man,") instead of the original proposition.[3][4] This technique has been used throughout history in polemical debate, particularly in arguments about highly charged emotional issues where a fiery, entertaining "battle" and the defeat of an "enemy" may be more valued than critical thinking or understanding both sides of the issue. Origin[edit]