Famous Movie Quotes as if Spoken by a Proper Englishman 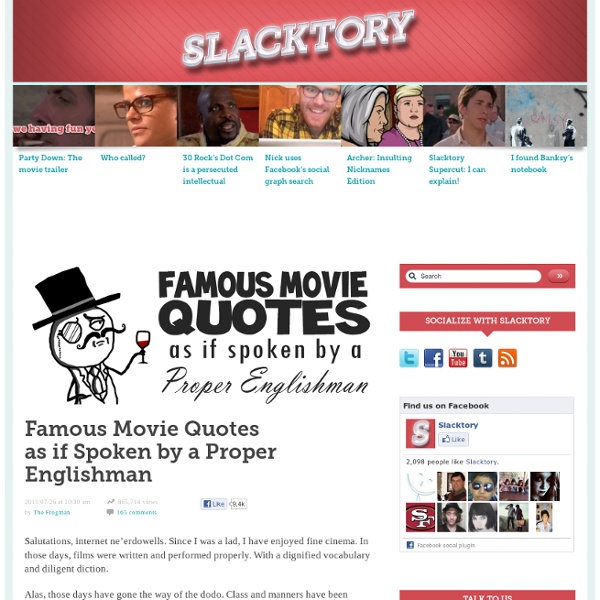 Salutations, internet ne’erdowells. Since I was a lad, I have enjoyed fine cinema. In those days, films were written and performed properly. With a dignified vocabulary and diligent diction. Alas, those days have gone the way of the dodo. Therefore I have put my quill to parchment and rewritten some of the most famed movie quotations as a proper Englishman would have uttered them. Related: Top ten movie-themed charts from I Love Charts.

How a Vacuum Works Most Upvoted 733 votes Letter of Acceptance 468 votes Boop in a box 65 votes Mr. 134 votes Spotted: Someone With a Lot of Time on His Hands 28 votes Share Tweet Email How a Vacuum Works Favorite By Unknown Share: 1 Share on twitter Share on google_plusone_share Share on pinterest_share Share on stumbleupon Share on reddit Share on email Reposted by and 128 more... More From Cheezburger From Around the Web Recommended by Cheezburger Comments No items at this time... social networking by Facebook Comments Featured Hot Today Why Google Will Always Be Better Than Bing deviantART User Sakimichan Imagines What Famous Animated ... Cats Have a Lot to Say When You've Been Gone For Three Days! "Nativity Scene" Go 'Head and Get Under the Giant Water Balloon! This Brave Little Elephant Charges Some Tourists in the Cutest ... Harness Those Sweater Puppies This Couple Had Their Priest Sing at Their Wedding, But They ... 9 GIFs Showing That Nintendo Has Created The Best Game Ever Follow Cheezburger Puppies or kittens? Make a Meme

Funny Anti Jokes What are Antijokes? Anti Jokes (or Anti Humor) is a type of comedy in which the uses is set up to expect a typical joke setup however the joke ends with such anticlimax that it becomes funny in its own right. The lack of punchline is the punchline. We’ve just released huge update to the iOS app! Now, access all your favorite text and photo sites like Anti-Joke, DIYLOL! A few things didn’t make the original cut (like comments) but they’ll be back soon. NEW ANTI-JOKE BOOK! Want more? 2012 March 12 - The Scale of the Universe Interactive Discover the cosmos! Each day a different image or photograph of our fascinating universe is featured, along with a brief explanation written by a professional astronomer. 2012 March 12 The Scale of the Universe - Interactive Flash Animation Credit & Copyright: Cary & Michael Huang Explanation: What does the universe look like on small scales? Tomorrow's picture: dust before galaxies Authors & editors: Robert Nemiroff (MTU) & Jerry Bonnell (UMCP)NASA Official: Phillip Newman Specific rights apply.NASA Web Privacy Policy and Important NoticesA service of:ASD at NASA / GSFC& Michigan Tech.

Perception > The Epic Everything Thread Posted 21 May 2007 - 01:02 AM If this is against rules just delete it hahaha I typed in Epic on google... and this came up. LEGITskateboardwheel, richylocsfilmer, zipper1022Sb Jesse, supabadmush, Code Rad, estijdugeefresh1, yeah15, Colin L, Kr3ww FiveFourNo, on Jun 14 2007, 12:21 AM, said: You probably won't get the death penalty for skateboarding though, unless they catch you doing a benihana. Back to top

This no-budget science fiction short looks better than most movies The Good: AMAZING effects and character design! The battle droids actually *looked* like devices built for live combat situations—heavily-armoured, heavily-ARMED, and just...heavy! The Bad: 1) WHEN will people finally drop the completely stupid "careful withdrawal of consciousness from virtual environment" trope? 2) If a battle bot has some way of overloading its batteries or onboard generator to generate an EMP, IT WILL FRY ITSELF IN THE PROCESS. I know, I know, I'm a nitpicking geek...but, really, what's the excuse for complete scientific illiteracy in so-called "sci-fi" film-making?

How to properly conceal alcohol in your facebook pictures | Standard Madness This is inspired by that one frantic search for a photo of yourself that did not contain a bottle of booze right after your newest employer sent you a facebook friend request. Cats are probably the best way to block that longneck out of the picture. Who doesn’t approve of cats? 11 Sexy Photos Totally Ruined By People in the Background There's some part of human nature that really makes us laugh when attempted sexiness crashes and burns. This photo collection is a celebration of that horrible, yet undeniable, instinct that we all have. I've been collecting funny photos off the Internet for years and these are the 11 best photos I've ever found where someone (read: a woman) was trying to be sexy... but someone or something crept into the background of the photo and ruined it. Of course, what makes it better is that they didn't notice the interloper and posted the photo online anyways... which brings us to today. This is the first list in a two-part series... today I have 11 sexy photos totally ruined by people in the background, tomorrow I'll have 11 photos of people totally ruined by sex in the background. The old man sleeps.