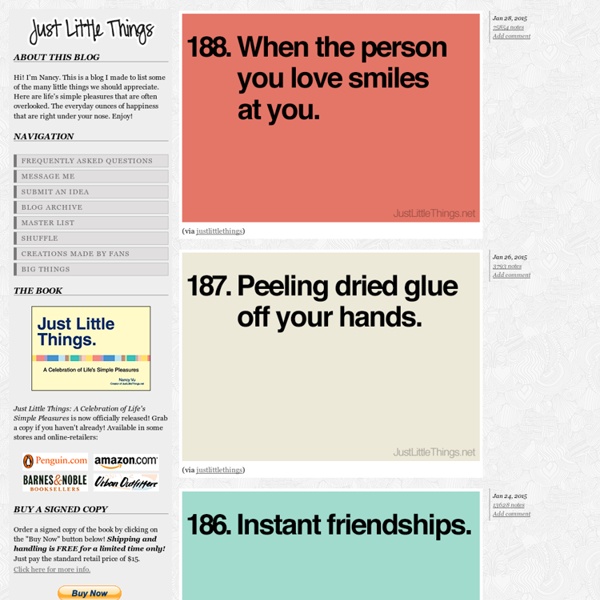 1000 Awesome Things | A time-ticking countdown of 1000 awesome things by Neil Pasricha PostSecret Perception - StumbleUpon . . . Something To Think About. . . Washington, DC Metro Station on a cold January morning in 2007. The man with a violin played six Bach pieces for about 45 minutes. During that time approx. 2 thousand people went through the station, most of them on their way to work. 4 minutes later: The violinist received his first dollar: a woman threw the money in the hat and, without stopping, continued to walk. 6 minutes: A young man leaned against the wall to listen to him, then looked at his watch and started to walk again. 10 minutes: A 3-year old boy stopped but his mother tugged him along hurriedly. 45 minutes: The musician played continuously. 1 hour: He finished playing and silence took over. No one knew this, but the violinist was Joshua Bell, one of the greatest musicians in the world. This is a true story. The questions raised: *In a common place environment at an inappropriate hour, do we perceive beauty? *Do we stop to appreciate it? *Do we recognize talent in an unexpected context?

Gypsy Names Gypsy Surnames, Romani Surnames From "Romano Lavo-Lil Word-book of the Romany" by George Borrow, 1905 COOPER AND SMITH: There are many curious things connected with the Gypsies, but perhaps nothing more so than what pertains to their names. Gypsies have a double nomenclature, each tribe or family having a public and a private name, one by which they are known to the Gentiles, and another to themselves alone. Their public names are quite English; their private ones attempts, some of them highly singular and uncouth, to render those names by Gypsy equivalents. Gypsy names may be divided into two classes, names connected with trades, and surnames or family names. First of all, something about trade names. There are only two names of trades which have been adopted by English Gypsies as proper names, Cooper and Smith: these names are expressed in the English Gypsy dialect by Vardo-mescro and Petulengro. BOSWELL: The proper meaning of this word is the town of Bui.

The price for ridding society of bad is always high In June of 1945, this striking letter arrived at the home of 3-year-old Dennis Helms in Washington, written on a sheet of Adolf Hitler's letterhead. It had been penned by his father, Lt. Richard Helms, an intelligence operative with the OSS who, following Germany's surrender the month before, had managed to acquire some of the recently-deceased Nazi leader's stationery from the Reich Chancellery. He then wrote to his son. Richard Helms later became Director of the CIA. His letter to Dennis now resides in their museum. Transcript follows. Transcript OBERSALZBERG, DEN V-E dayADOLF HITLERDear Dennis, The man who might have written on this card once controlled Europe — three short years ago when you were born.

Types of Martial Arts There are several hundred martial art systems, here are some. We recognize it is not a complete listing and would be glad to add to, update or correct this listing. If you would like to contribute, email us. Aikido - Aikido is a Japanese martial art developed by Morihei Ueshiba (often referred to by his title 'O Sensei' or 'Great Teacher'). Bando Thaing - Bando is credited as a style of armed and unarmed combat native to Burma. Capoeira - Capoeira (pronounced Capo-wa-ra), a fun and exciting sport, is a Brazilian art form and self-defense; with strong aerobic and dance elements. Chanbara - Over thirty years ago Japanese martial artists and swordmasters came together and created a better training style. Choi Kwang Do - Choi Kwang Do was developed by Grandmaster Kwang Jo Choi between 1978 and 1987 and has proven to be the most effective martial arts system in the world. Choi Kwang Do is not designed for competition and does not follow the intensity of sports training.

Hang on, my love, and grow big and strong It took nine months for Iggy Pop to reply to then-21-year-old Laurence's fan letter, but really the timing couldn't have been more perfect as on the morning his thoughtful note did arrive at her home in Paris, Laurence's family were being evicted by bailiffs. Laurence recalls that moment back in 1995: "By the time I finished I was in tears. Not only had Iggy Pop received the letter I had sent him nine months before, and I could have missed his if he'd sent it a day later, but he had read the whole 'fucking' 20 pages, including the bit about my Adidas dress (a semi-innocent allusion on my part), and all the rest, my description of being the child of an acrimonious divorce with the string of social workers, lawyers, greedy estate agents and bailiffs at the door, the fear, the anger, the frustration, the love." Iggy's empathetic, handwritten response addressed Laurence's problems with both grace and eloquence, and really can't be praised enough. Transcript follows. Transcript