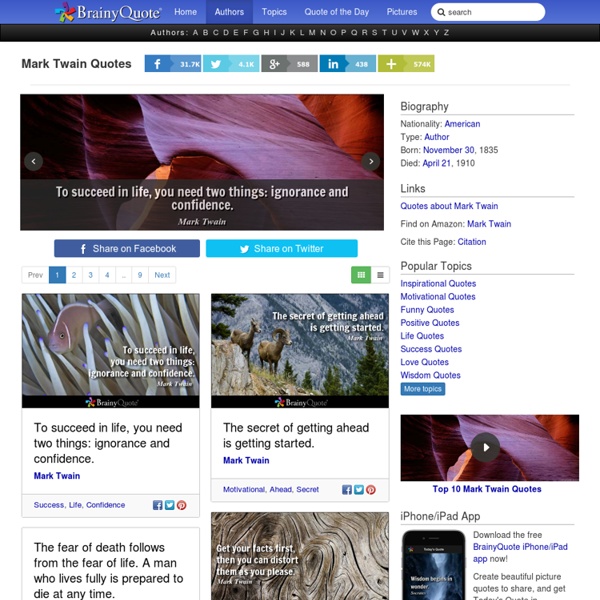 Mark Twain Biography An adventurer and wily intellectual, Mark Twain wrote the classic American novels The Adventures of Tom Sawyer and Adventures of Huckleberry Finn. Synopsis Born on November 30, 1835, in Florida, Missouri, Samuel L. Clemens wrote under the pen name Mark Twain and went on to pen several novels, including two major classics of American literature, The Adventures of Tom Sawyer and Adventures of Huckleberry Finn. He was also a riverboat pilot, journalist, lecturer, entrepreneur and inventor. Twain died on April 21, 1910, in Redding, Connecticut. Early Life Writing grand tales about Tom Sawyer, Huckleberry Finn and the mighty Mississippi River, Mark Twain explored the American soul with wit, buoyancy, and a sharp eye for truth. Samuel Langhorne Clemens, better known by his pen name, Mark Twain, was born on November 30, 1835, in the tiny village of Florida, Missouri, the sixth child of John and Jane Clemens. Sam Clemens lived in Hannibal from age 4 to age 17. Life in Hannibal Heading Out West

Marcus Aurelius' Six Timeless Observations on Life Marcus Aurelius Antoninus was Roman emperor from 161 until his death in 180. A great thinker, Marcus embodied Plato’s ideal of the philosopher king to a considerable extent. He was a strong emperor, engaging in various wars in defense of the Roman empire for his entire reign, but he was also greatly concerned with social justice and welfare, even going so far as to sell his own possessions to alleviate people’s suffering from famine and plague (from which he died). Marcus left behind a corpus of writing which, despite it’s antiquity, offers us some truly timeless wisdom. Here are six lessons we can learn from his observations on life. Lesson #1: We Are Responsible for Our Own Experience of Life “Such as are your habitual thoughts; such also will be the character of your mind; for the soul is dyed by the color of your thoughts.” Much has been made recently of the (so called) ‘law of attraction.’ I keep a sign posted over my desk at work. Lesson #3: Live a Real Life Lesson #4: Be Grateful

The Adventures of Tom Sawyer The Adventures of Tom Sawyer by Mark Twain is an 1876 novel about a young boy growing up along the Mississippi River. The story is set in the fictional town of St. Petersburg, inspired by Hannibal, Missouri, where Twain lived.[2] Summary[edit] Tom Sawyer lived with his Aunt Polly and his half-brother, Sid. Tom falls in love with Becky Thatcher, a new girl in town, and persuades her to get "engaged" by kissing him. Tom, Huck, and Joe Harper run away to an island. Back in school, Tom gets himself back in Becky's favor after he nobly accepts the blame for a book she has ripped. Summer arrives, and Tom and Huck go hunting for buried treasure in a haunted house. As Tom and Becky wander the extensive cave complex for the next few days, Tom one day accidentally encounters Injun Joe, although the boy is not seen by his nemesis. Sequels and other works featuring Tom Sawyer[edit] Adaptations and influences[edit] Film and Television Theatrical[edit] Ballet[edit] Internet[edit] Music[edit] See also[edit]

The Three Phases of Life One of life's great fascinations is watching people evolve over time. Some people grow and develop, while others seem to be stuck in patterns that limit their happiness and well-being. Others excel in certain areas of their lives while failing miserably in others. A small few are spectacularly successful by conventional measures yet are perpetually dissatisfied. Is there a simple model we can use to make sense of these observations? Many years of watching and thinking have led me to believe that we can further our understanding by simplifying the problem. I want to be a little precise with words here. Why is this important? Schlepper Let us begin with the first state. This term comes from the Yiddish verb "schlep," which means "to drag." Literally, a schlepper is a carrier. First of all, just because you are schlepping does not mean you are forbidden to think. In general, we all need to schlep. Schleppers quickly perceive the great injustice of life. So, we all start out as schleppers.

Why Be Happy When You Could Be Interesting? | Postcards from Žižek "We don't really want what we think we want," says philosopher Slavoj Žižek. It's a strange, almost exotic thought at a time when many of us are inundated daily with the prospect of infinite choice. You can no longer buy a product, it seems, without expressing your opinion. But what if happiness isn't actually all that fulfilling? In this second video from our interview with Žižek, the author of Big Think's most recent Book of the Month argues that happiness is a conformist category. "Let’s be serious: when you are in a creative endeavor, in that wonderful fever--'My God, I’m onto something!' You can be happy without being moral. Tell us: Would you rather be happy or inspired?