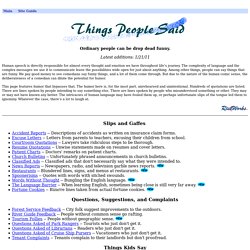 Latest additions: 1/21/11 Human speech is directly responsible for almost every thought and emotion we have throughout life's journey. The complexity of language and the complex messages we use it to communicate leave the possibilities wide open for just about anything. Among other things, people can say things that are funny. We pay good money to see comedians say funny things, and a lot of them come through. This page features humor that bypasses that. Slips and Gaffes Accident Reports -- Descriptions of accidents as written on insurance claim forms. Questions, Suggestions, and Complaints Forest Service Feedback -- City folk suggest improvements to the outdoors.

Wisdom Quotes. Popular Quotes. Someone is walking over my grave. Meaning A response to a sudden unexplained shudder or shivering. 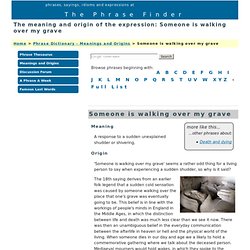 Origin 'Someone is walking over my grave' seems a rather odd thing for a living person to say when experiencing a sudden shudder, so why is it said? The 18th saying derives from an earlier folk legend that a sudden cold sensation was caused by someone walking over the place that one's grave was eventually going to be. This belief is in line with the workings of people's minds in England in the Middle Ages, in which the distinction between life and death was much less clear than we see it now. The earliest known record of the phrase in print, which is of course an indication of the earliest date that we can prove that the phrase was in public use, is in Simon Wagstaff's A Complete Collection of Genteel and Ingenious Conversation, 1738. Miss [shuddering]. The old folk belief is recorded by the Yorkshire novelist Harriet Parr, who also used a pseudonym, that of Holme Lee, in Basil Godfrey's Caprice, 1868: 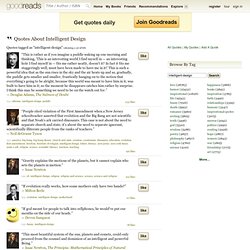 The issue concerns the very laws of nature themselves. For 40 years, physicists and cosmologists have been quietly collecting examples of all too convenient "coincidences" and special features in the underlying laws of the universe that seem to be necessary in order for life, and hence conscious beings, to exist. Change any one of them and the consequences would be lethal.

Fred Hoyle, the distinguished cosmologist, once said it was as if "a super-intellect has monkeyed with physics". To see the problem, imagine playing God with the cosmos. Example: neutrons are just a tad heavier than protons. 50 Awesome Quotes by Neil deGrasse Tyson. Neil deGrasse Tyson (born October 5, 1958) is an American astrophysicist, a science communicator, the Frederick P. 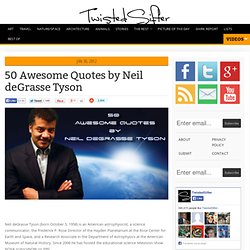 Rose Director of the Hayden Planetarium at the Rose Center for Earth and Space, and a Research Associate in the Department of Astrophysics at the American Museum of Natural History. Since 2006 he has hosted the educational science television show NOVA scienceNOW on PBS. Tyson attended Harvard University, where he majored in physics. He was a member of the crew team in his freshman year, but returned to wrestling, eventually lettering in his senior year. Tyson earned a Bachelors of Arts in physics from Harvard in 1980 and began his graduate work at the University of Texas at Austin, where he earned a Master of Arts in astronomy in 1983.

Dr. If Pizza sizes were given in area not diameter, you’d see instantly that a 7 inch is less than half the size of a 10 inch pie— Neil deGrasse Tyson (@neiltyson) January 25, 2012 The most boring constellation: Triangulum Australis. EPIGRAMME (HEINRICH VON KLEIST)