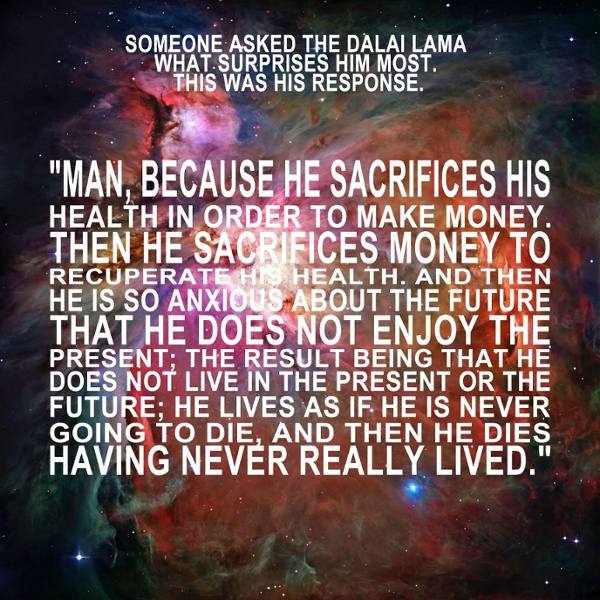 50 Lessons I wish I had learned earlier Welcome to our blog! Here you'll find bits and pieces of wisdom learned from cycling 17,000 miles from Alaska to Argentina together as a family. Hope it inspires you to live your dream! Now that I’m old and gray (but not quite in my rocker yet!) You’re stronger than you think you are.Mistakes teach you important lessons. What lies before us and behind us are tiny matters when compared to what lies within us.Don’t pray when it rains if you don’t pray when the sun shines.It’s not about getting a chance, it’s about taking a chance.If it were easy everyone would do it.Be vulnerable.A problem is a chance for you to learn.Regardless of the situation, life goes on. If you enjoyed these inspirational quotes and feel they would be beneficial for others, we would appreciate it if you would take a moment to share it with your friends via Twitter, Facebook, Pinterest or email. Wondering who this crazy family is who would spend three years riding bikes from one end of the world to the other?

25 Beautifully Illustrated Thought-Provoking Questions A question that makes you think is worth asking… At the cusp of a new day, week, month, or year, most of us take a little time to reflect on our lives by looking back over the past and ahead into the future. We ponder the successes, failures and standout events that are slowly scripting our life’s story. If you would like to maximize the benefits of self reflection, our new sister site, Thought Questions, is for you. Remember, these questions have no right or wrong answers. Here’s a sample of 25 recent thought questions posted on the site: Thought Questions is updated daily. Title photo by: Oberazzi For all other photo credits please refer to ThoughtQuestions.com Related 6 Questions that Will Save Your Relationships When you don't ask sincere questions and talk it out, there's a lot of important stuff that ends up never getting said. May 21, 2014 In "Life" 20 Questions You Should Ask Yourself Every Sunday July 24, 2008 In "Hacks" 40 Photo-Illustrated Questions to Refocus Your Mind

BLOOMINGTON BITES: CLASSIC CHOCOLATE CAKE Musical pairing – Sisters Are Doin’ It For Themselves by Aretha Franklin (with The Eurythmics) ‘An Adventure to the Classics‘ – As kids, my sister and I fell into two camps. I was the adventurous eater, my sister the picky one. I would pile on the spicy Indian sauces whereas my sister wouldn’t eat jelly on her peanut butter sandwiches. Thankfully, she seems to have forgiven my youthful lecturing, and grown out of her pickiness as well. Of course, I’ve tried chocolate cake. SMITH BITES NOTE: The Professor and I were drooling over this cake so we had to bake one ourselves . . . problem was that it’s just us two chickens here and so we made a half recipe and baked it in two, 6-inch pans . . . the pictures you see in this post are that of the 6-inch cake. I learned one trick today that will change how I frost cakes from this point forward. from Southern Cakes by Nancie McDermott 1 cup very cold heavy cream or whipping cream1/4 cup confectioner’s sugar1 teaspoon vanilla extract © 2011, Avery.

Word The term word may refer to a spoken word or to a written word, or sometimes to the abstract concept behind either. Spoken words are made up of units of sound called phonemes, and written words of symbols called graphemes, such as the letters of the English alphabet. Definitions[edit] Semantic definition[edit] Leonard Bloomfield introduced the concept of "Minimal Free Forms" in 1926. Some semanticists have put forward a theory of so-called semantic primitives or semantic primes, indefinable words representing fundamental concepts that are intuitively meaningful. Features[edit] Word boundaries[edit] The task of defining what constitutes a "word" involves determining where one word ends and another word begins—in other words, identifying word boundaries. Orthography[edit] Not all languages delimit words expressly. Sometimes, languages which are extremely close grammatically will consider the same order of words in different ways. Morphology[edit] Letters and words Philosophy[edit] Classes[edit]

Manilla » Free Online Account and Bill Organizer (Images) 56 Inspirational Picture Quotes That Will Motivate Your Mind Now and then when we need a little Inspiration we often reach for a daily quote or motivational video. So I decided to share 56 of my favorite picture quotes, share them with your friends or plaster them on your wall and desktop for your daily Inspiration. Make A Cheap &Easy Solar USB Charger With An Altoids Tin : TreeHugger - StumbleUpon Photos by Joshua Zimmerman The craftster behind the very popular $3 solar-powered emergency radio is back with a new awesome project: a cheap solar battery charger with a USB plug. Zimmerman wrote, saying that he saw a lot of small solar powered chargers being talked about over Earth Day, but there was a big problem: "They're all quite nice, but also quite expensive. I don't think I've seen any for less than $60, and I've not seen one that really suits my style." So, he came up with his own, using one of our favorite reusable items -- the ever wonderful Altoids tin. In looking for the cheapest way to accomplish the task, Zimmerman found that he could build a USB solar charger for under $30 (or $10 if be buys parts in bulk, though it's not likely you'll be buying bulk solar cells and DC-to-USB converter circuits). Zimmerman states, "The central brain of our project is a DC to USB converter circuit.

Photo Quoto: Sayings and Quotations printer Who came up with the idea that we are supposed to drink orange juice at breakfast? And why, if oatmeal is so good for us, do we eat that only in the morning as well? Apologies to the Palinites, but nutritionists are starting to realize that you and I like our oatmeal and OJ before we start the day because we evolved to like it that way—because enjoying the two together is healthier than eating each of them alone. Epidemiologist David R. Jacobs, Ph.D., of the University of Minnesota calls it food synergy, and he, along with many other nutritionists, believes it might explain why Italians drizzle cold-pressed olive oil over tomatoes and why the Japanese pair raw fish with soybeans. What's more fascinating, however, is that the evolution between eater and eaten might answer the long-held question about why humans live longer, healthier lives on traditional diets. Tomatoes & Avocadoes And when it comes to salads, don't choose low-fat dressings. Oatmeal & Orange Juice Broccoli & Tomatoes