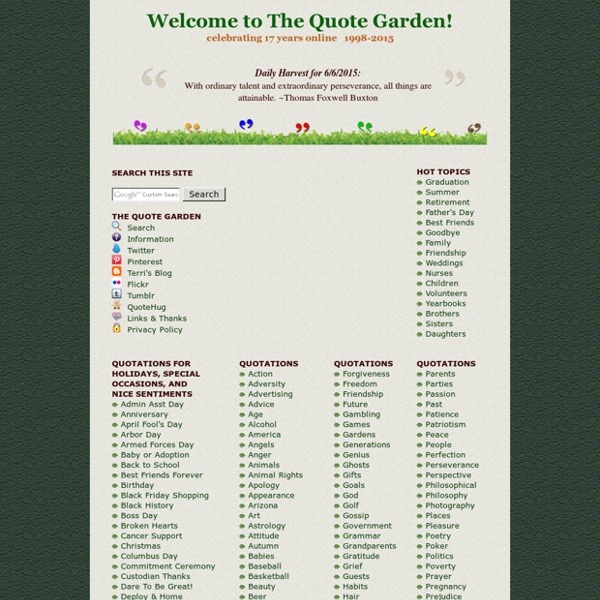 Quotes about Quotations, Proverbs, Sayings, Aphorisms, Etc Related Quotes Writing Brevity Books Libraries Language Like your body your mind also gets tired so refresh it by wise sayings. ~Hazrat Ali The only way to read a book of aphorisms without being bored is to open it at random and, having found something that interests you, close the book and meditate. Red Moon An Article about Red Moon by Samradh Introduction In this article I will be using Miranda Gray's book "Red Moon" (ISBN 1-85230-496-0). You may be interested in purchasing it as it has far more to offer than I can tell you in this brief discussion. For example she has a way to create a moon dial to follow your own personal menstrual cycle and how each stage affects you. If you are interested in looking deeply into this aspect of yourself I would recommend your getting the book.

White Hot Truth: because self-realization rocks. I’ve got the Goddess of Permission on speed dial and she was thrilled to oblige with this sweeping list of acts of self expression and liberation. We can draw on it whenever we need. Come back often. Build on it. The Permission Goddess sends kisses and high-fives. you have permission to Things People Said Ordinary people can be drop dead funny. Latest additions: 1/21/11 Human speech is directly responsible for almost every thought and emotion we have throughout life's journey.

Myspace Good Morning Comments, Orkut Scraps, Graphics Good Morning Send this comment to your friend in E-mail This picture was submitted by Jay G. A Dictionary of Scientific Quotations (ca. 235 bc) b. Syracuse Give me a place to stand, and I will move the Earth. (1920-1992) b. Petrovichi, Russia. Pinterest and Feminism On constructing a lesson plan to teach Pinterest and feminism I teach sociology; usually theoretical and centered on identity. I pepper in examples from social media to illustrate these issues because it is what I know and tends to stimulate class discussion. It struck me while reading arguments about Pinterest that we can use this “new thing” social media site to demonstrate some of the debates about women, technology and feminist theory. We can view Pinterest from “dominance feminist” and “difference feminist” perspectives to both highlight this major division within feminist theory as well as frame the debate about Pinterest itself.

50 Things You Need To Give Up Today!! When you stop chasing the wrong things, you give the right things a chance to catch you. So starting today… Give up trying to be perfect. – The real world doesn’t reward perfectionists, it rewards people who get things done. Give up comparing yourself to others. – The only person you are competing against is yourself.

Someone is walking over my grave Meaning A response to a sudden unexplained shudder or shivering. Origin 'Someone is walking over my grave' seems a rather odd thing for a living person to say when experiencing a sudden shudder, so why is it said? Friendship Pictures, Images, Graphics, Comments, Scraps for Orkut, Hi5, Myspace HTML Code for Orkut, Myspace, Hi5, Tagged, Friendster: <p><a href=" src=" alt="Friendship Graphic"></a></p><a href=" | <a href=" | <a href=" target="_blank">Forward this Picture</a> Use this BB Code for forums: [url= Direct Link: <br/> Source: <a href=" | More: <a href="

Who wrote “Risk”? Is the mystery solved? : The Official Anais Nin Blog Have we solved the mystery of who wrote the popular poem attributed to Anais Nin, known as “Risk”? I can say this: Since posting this mystery a few years ago, nowhere has its source been found in any of Anais Nin’s oeuvre. So how did it come to be attributed to her? That remains a mystery. However, Elizabeth Appell has come forward with a compelling case that may hold the answer of who, if not Anais, actually wrote the poem: Kirsch Kirschwasser, produced in Germany and bottled at 40% ABV. A kirschwasser (/ˈkɪərʃvɑːsər/ KEERSH-vahs-ər; German: [ˈkɪɐ̯ʃvasɐ], German for “cherry water”) or kirsch is a clear, colorless fruit brandy traditionally made from double distillation of morello cherries, a dark-colored cultivar of the sour cherry. However, it is now also made from other kinds of cherries.