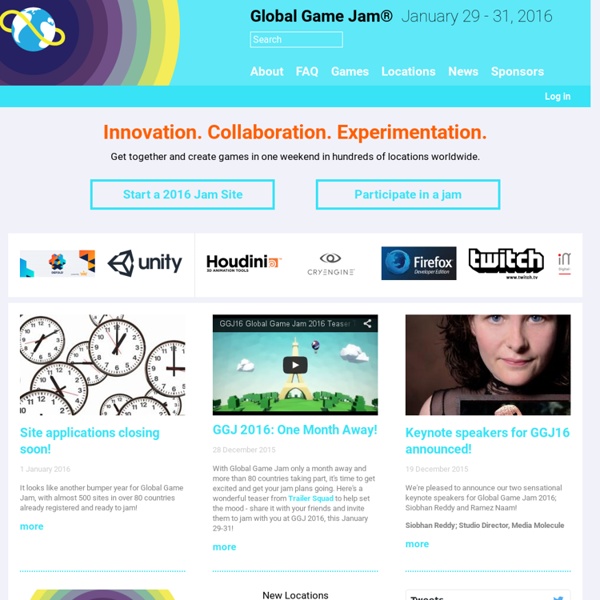 Local multiplayer game Starwhal: Just the Tip was first created during Global Game Jam 2013 (#ggj13) at Carleton School of Information Technology Ottawa, Canada. The Breakfall team got inspired by #GGJ13 theme 'the sound of a heartbeat' and: "Inspired by countless couch-gaming gatherings over the decades, we wanted to bring something competitive, creative, and immediately fun to the table. Our original prototype was conceived and developed in 48 hours with focus entirely on these areas. STARWHAL: Just the Tip is a simulation of dreams in an ocean of the mind." After initial success the game got its own Arcade cabinet at Fantastic Arcade and was selected for the Gamercamp 2013 & Wild Rumpus showcases.

Antwerp House of Indie The Antwerp House of Indie is a very young collective of game designers, curators, enthusiasts and carpenters. We want to unite the existing indie developers in our region, and inspire more people to join the community. >> visit The House Of Indie website Here are some of our projects from 2013

Global City Teams Challenge Tech Jam The Global City Teams Challenge, an initiative by National Institute of Standards and Technology (NIST) and US Ignite, is designed to advance the deployment of Internet of Things (IoT) technologies within a smart city / smart community environment around the world. More than 30 teams are pursuing projects related to sectors including public safety, energy and transportation. Participants in the Global City Teams Challenge are working to deploy an emerging technology within a cyber physical system (CPS) by June 2015. On February 12-13, 2015, NIST and US Ignite will host a Tech Jam that will provide existing teams with an opportunity to present their project plans and identify additional project partners.

Monomyth Joseph Campbell's monomyth, or the hero's journey, is a basic pattern that its proponents argue is found in many narratives from around the world. This widely distributed pattern was described by Campbell in The Hero with a Thousand Faces (1949).[1] Campbell, an enthusiast of novelist James Joyce, borrowed the term monomyth from Joyce's Finnegans Wake.[2] Campbell held that numerous myths from disparate times and regions share fundamental structures and stages, which he summarized in The Hero with a Thousand Faces: A hero ventures forth from the world of common day into a region of supernatural wonder: fabulous forces are there encountered and a decisive victory is won: the hero comes back from this mysterious adventure with the power to bestow boons on his fellow man.[3] A chart outlining the Hero's Journey. Summary[edit]

Giant Sparrow What have we been doing for the past year? We’re still working on our new game which still hasn’t been announced yet. So it’s kinda hard to talk about. But for anyone who’s wondering if we’re still alive: yes, we are! Entry Form AEAF Awards Entry Deadline 30 May Entries are invited for these categories: Commercials Animation - Commercials VFX - Feature Films Animation - Feature Films VFX - Web Viral - Titles & Openers for TV and Feature Film - Idents - Short Film - Music Video - TV Series - Student - Games Cinematics - Education & Infographics - Live Event Visual Effects. GOLD - SILVER and BRONZE awards will be given for the top three entrants in each category. For the criteria and entry rules click Entry Criteria » EVENTS FLEGA organizes its own events and attends or promotes (inter)national events, do join us! FLEGA Café: General Assembly // Brussels

Tech Jam 2016 – Hour of Code Date: 5 - 10 December 2016Venue: Science Centre Singapore Its time to Jam with technology. Featuring Hour of Code to introduce children as young as four to coding, as well as in depth workshops for students and adults, Tech Jam 2016 has something for everyone from 4 to 100 and is a great opportunity to learn about Coding and technology.