How I built an electricity producing wind turbine 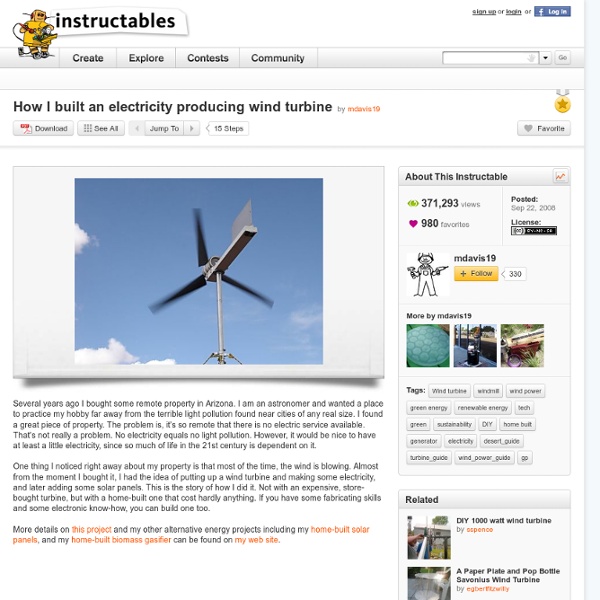 Several years ago I bought some remote property in Arizona. I am an astronomer and wanted a place to practice my hobby far away from the terrible light pollution found near cities of any real size. I found a great piece of property. The problem is, it's so remote that there is no electric service available. That's not really a problem. One thing I noticed right away about my property is that most of the time, the wind is blowing. More details on this project and my other alternative energy projects including my home-built solar panels, and my home-built biomass gasifier can be found on my web site. Related:  DIY Clean Energy • Hands-on • Tech Pro

How to Build a Wind Power Generator video How to Build a Wind Power Generator Harvesting the wind for energy is not a new concept. The origins of using the winds to to produce mechanical energy are lost in the mists of time . Mankind was using wind power to move his ships and grind his grain at least a couple thousand years ago. With the advent of electricity it was only natural to utilise this abundant source of raw power. Early wind turbines in the beginning of the 20Th century provided some of the first usable electricity to farms and businesses before the coming of the electric power lines. How I built an electricity producing Solar Panel Several years ago I bought some remote property in Arizona. I am an astronomer and wanted a place to practice my hobby far away from the sky-wrecking light pollution found near cities of any real size. In my attempt to escape city light pollution, I found a great piece of remote property. The problem is, it's so remote that there is no electric service available. That's not really a problem. No electricity equals no light pollution. I built a wind turbine to provide some power on the remote property. Here is a video of the solar panel set up and in use on my remote, off-grid property. Let me state up front that I probably won't be able to help you out much if you decide to build your own solar panel(s). So what is a solar panel anyway? I started out the way I start every project, by Googling for information on home-built solar panels. After a while, I came to some conclusions: <a href=' seller. A solar panel is really just a shallow box.

Mini Bio-gas plant using food waste, decomposable organic material and kitchen waste I have been searching for some method of using the food waste, decomposable organic material and kitchen waste efficiently, and came across information on producing bio-gas from organic waste. The bio-gas produced from food waste, decomposable organic material and kitchen waste, consisting of methane and a little amount of carbon di oxide is an alternative fuel for cooking gas (LPG). Also, the waste materials can be disposed off efficiently without any odor or flies and the digested slurry from the bio-gas unit can be used as an organic manure in the garden. Components of the Bio-gas Plant The major components of the bio-gas plant are a digester tank, an inlet for feeding the kitchen waste, gas holder tank, an outlet for the digested slurry and the gas delivery system for taking out and utilizing the produced gas. This project is also useful for students to have a hands-on learning experience in constructing a Mini Bio-Gas Plant, using locally available material. Material Required: 1.

PortableApps.com - Portable software for USB, portable and cloud drives Hybrid solar panel (photovoltaic and thermal) I am not going to repeat all the details on how to build a solar panel, there are plenty of other instructables for this (search tool is your friend!). I will give some basics, though... and then focus more on the "hybrid" nature of my panel (PV + thermal). General characteristics: - about 0.5 m^2 area, at a maximum of 1 kW/m^2 of irradiation and 12% efficiency this should produce UP TO 60 W of electrical power. (at the same time this means that about 440 W of thermal power could potentially be harnessed!). Materials: - 36 cells, 3"x6". Homemade Lotion Recipe - How to Make Your Own Lotion If you are still using the cancer-in-a-bottle store bought lotion on yourself or your family, there are super easy natural alternatives! In fact, this recipe is incredibly simple to make and all the ingredients are available here. It only has three basic ingredients and literally takes ten minutes to make! You can customize your lotion to your skin type and desired scent, and you can even make it for baby (calendula and chamomile…) There are endless variations, but some of my favorites are: Calendula and Chamomile for babyRosewater and Almond OilPeppermint, Wintergreen, and Ginger for sore musclesCoconut and Calendula for faceMint and green teaLavender and vanilla I’ve included my basic recipe below. NOTE: This is an improved recipe since many people were having trouble getting the temperatures exactly right to get the lotion to emulsify (as per the comments below). Organic Homemade Lotion Basic Ingredients: Note: All ingredients and many essential oils are available here.

Amazing plasma globe tricks that you never knew before!!! The thing you must have is the plasma globe itself, you can use any plasma globe you have - from little tiny USB plasma globe all the way to the gigantic laboratory plasma globe, the plasma globe I used is called "Plasma 360". Also you need some more things if you want more fun out of your plasma globe... Get some of those thing you have around your house! I am very sure you have one of any of those things in your house! - florescent tube (any size will do) - Energy saver lamp (compact fluorescent bulb) (any type will do) - Cold cathode tube (any color and type will do) - Xenon tube (you can find one inside a disposable flash camera) - neon bulb (I used some tiny ones) - LED's (use cheap junk LED's, you will find out later in this instructable) - LCD screen (I used one from broken electronics) You could also try experiment using other things like... - Neon sign

How to create a password-protected (encrypted) disk image Languages Learn how to use Disk Utility to create an encrypted disk image. An encrypted disk image works just like a regular disk image but requires a password to open and become available ("mount"). Open Disk Utility (located in /Applications/Utilities/). Important: If you forget the password, data stored in the encrypted disk image cannot be retrieved. Last Modified: Apr 10, 2013 One Moment Please Thanks for your feedback. Additional Product Support Information Project Build A Solar Panel: Step by step guide to building a solar panel with complete illustrations Introduction A solar cell's purpose is to generate electricity through the release of electrons from a material that is bombarded by electromagnetic radiation or photons. Most crystalline solar cells are sensitive to visible radiation from 400 - 700 nanometers, which correspond to 3.1 - 1.8 electron volts, of the visible region as shown by ACEPT W3 Group (1999) and also into the near infrared spectrum. As the wavelength of the electromagnetic radiation increases, the amount of electron volts decreases. This means that infrared radiation has less electron volts than the visible spectrum of light (because it has a larger wavelength than visible light) and ultraviolet and gamma radiation has more electron volts than both the visible spectrum of light and infrared radiation (because they have a smaller wavelength than both infrared and visible light). Significance of Solar Panels A solar cell, in itself, is of little value in our energy consumptive world.

DIY Solar Air Heating Collectors: Pop Can vs Screen Absorbers Search The Renewable Energy site for Do-It-Yourselfers Page Contents: The test collectors: Pop can collector on left and screen collector on right Collector Basics There is a lot of not so good information out there on what makes a good solar air heating collector design, so I thought I would include a little info on solar air collector physics, what makes for a good design, and how one can measure and compare collectors accurately. How do collectors work, and what makes a good design? On just about all solar thermal collectors, the sun shines through the glazing, and hits the collector absorber heating it. In full sun, the incoming solar energy is about 1000 watts per square meter of collector area. Most of this 850 w/sm that made it into the absorber end up going down one of two paths:: one part is picked up by the air flowing through the collector and ends up heating the room, and the other part ends up being lost out the glazing. The heat output the collector can be calculated as: 1. 4.