The Facts That Neither Side Wants to Admit About Gun Control. Justin KingJune 28, 2015 (TFC) Washington, DC – A church was shot up by a lunatic. 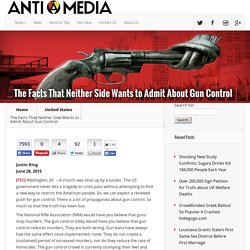 The US government never lets a tragedy or crisis pass without attempting to find a new way to restrict the American people. So, we can expect a renewed push for gun control. There is a lot of propaganda about gun control. So much so that the truth has been lost. The National Rifle Association (NRA) would have you believe that guns stop murders. Gun control is designed to stop people from killing each other, at least that’s what we are always told. United Kingdom: The UK enacted its handgun ban in 1996. Ireland: Ireland banned firearms in 1972. Australia: Australia enacted its gun ban in 1996. Plain and simple. The Real Reason Gun Control Will Never Work: Poverty has a greater correlation to violent crime than access to firearms. Don't value human life do. Citizens kill alot. Fact Sheet: Guns Save Lives - Gun Owners of America. Monday, 29 September 2008 00:00 Written by Administrator A. 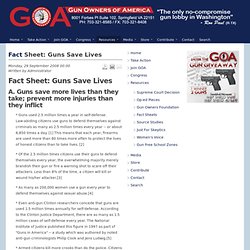 . * Armed citizens kill more crooks than do the police. Gun crime has plunged, but Americans think it's up, study says. The number of violent crimes involving guns has plummeted in the last two decades, but more than half of Americans think the opposite is true, according to reports released Tuesday. 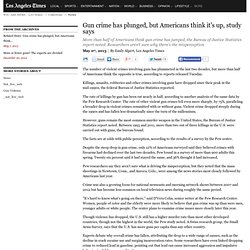 Killings, assaults, robberies and other crimes involving guns have dropped since their peak in the mid-1990s, the federal Bureau of Justice Statistics reported. The rate of killings by gun has been cut nearly in half, according to another analysis of the same data by the Pew Research Center. The rate of other violent gun crimes fell even more sharply, by 75%, paralleling a broader drop in violent crimes committed with or without guns. Violent crime dropped steeply during the 1990s and has fallen less dramatically since the turn of the millennium. However, guns remain the most common murder weapon in the United States, the Bureau of Justice Statistics report noted.

Are School Homicides 'Becoming the Norm'? HBO FilmsIn the aftermath of yesterday's shooting at an Oregon high school, the president worried that such slayings are "becoming the norm. 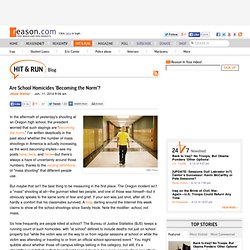 " I've written skeptically in the past about whether the number of mass shootings in America is actually increasing, as the word becoming implies—see my posts here, here, and here—but there's always a haze of uncertainty around those numbers, thanks to the varying definitions of "mass shooting" that different people use. But maybe that isn't the best thing to be measuring in the first place. The Oregon incident isn't a "mass" shooting at all—the gunman killed two people, and one of those was himself—but it obviously speaks to the same sorts of fear and grief. If your son was just shot, after all, it's hardly a comfort that his classmates survived. A map darting around the Internet this week claims to show all the school shootings since Sandy Hook.

So how frequently are people killed at school? Bureau of Justice Statistics. Gun Homicide Rate Down 49% Since 1993 Peak; Public Unaware. Pace of Decline Slows in Past Decade By D’Vera Cohn, Paul Taylor, Mark Hugo Lopez, Catherine A. 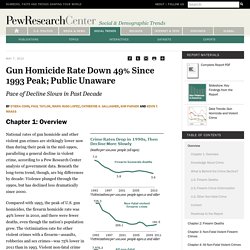 Gallagher, Kim Parker and Kevin T. Maass Chapter 1: Overview National rates of gun homicide and other violent gun crimes are strikingly lower now than during their peak in the mid-1990s, paralleling a general decline in violent crime, according to a Pew Research Center analysis of government data. Compared with 1993, the peak of U.S. gun homicides, the firearm homicide rate was 49% lower in 2010, and there were fewer deaths, even though the nation’s population grew. Every mass shooting over last 20 years has one thing in common... and it's not guns. (NaturalNews) The following is a republishing of an important article written by Dan Roberts from AmmoLand.com. 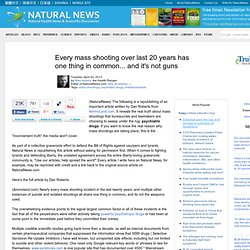 It reveals the real truth about mass shootings that bureaucrats and lawmakers are choosing to sweep under the rug: psychiatric drugs. If you want to know the real reason why mass shootings are taking place, this is the "inconvenient truth" the media won't cover. As part of a collective grassroots effort to defend the Bill of Rights against usurpers and tyrants, Natural News is republishing this article without asking for permission first. When it comes to fighting tyrants and defending liberty, the unstated agreement across the entire liberty-loving grassroots community is, "Use our articles; help spread the word!