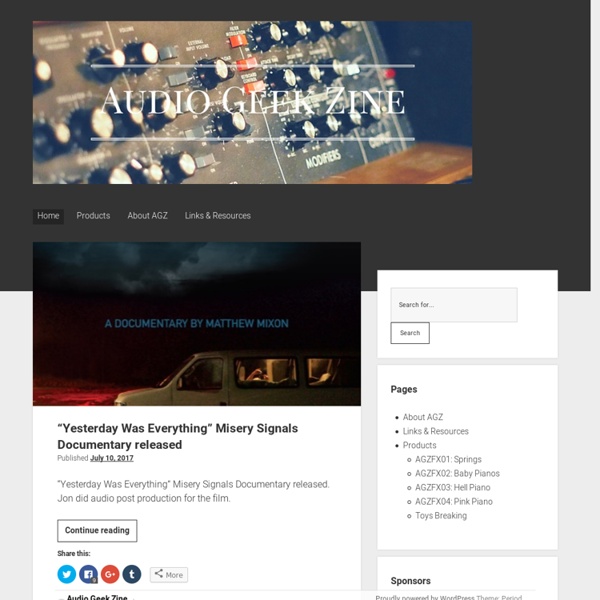 Musformation | The Daily DIY Guide To The New Music Landscape MusicTech Technology feature: Noise annoys! - PSNEurope Dr Annie Jamieson (pictured, below) is a postdoctoral researcher at the School of Philosophy, Religion and History of Science at the University of Leeds, whose research into hearing risk and its history focuses specifically on the live music industry. She also conducts regular seminars on the subject, the latest of which was part of the educational programme at PLASA Focus Leeds. Do you feel that the level of awareness of potential for hearing damage is better in pro-audio now than, say, ten years ago? Certainly, in terms of press and social media coverage it seems to have increased in the last year or two following some highly-publicised concerns about MIHD (Music-Induced Hearing Damage) in young people through sustained headphone use. In late 2014 I carried out an online survey of 230 audio professionals; the vast majority (some 98%) are aware of the risk, though almost 20% still never use hearing protection. What should their first action be if they do suspect hearing loss or damage?

New Music Strategies Synthtopia Will Prentice: We need £40m to preserve our unique recorded collection, which, as these five clips show, represents an irreplaceable part of our national heritage Sound recordings have long been an underappreciated part of our national heritage, probably because you can’t see them like a painting or a manuscript. To appreciate their value and meaning you have to play them back and listen to them. But collecting sounds is important. The experience of listening to them is as close to time travel as we’ve ever come. From the rare or iconic to the ephemeral and everyday, recordings give a living picture of the world changing around us. This is urgent: these recordings go back to the late-19th century, and many of the formats on which the sounds were originally captured – such as reel-to-reel, wax cylinders and cassette tapes – are disappearing from production, while some of the older materials themselves are decaying. We estimate that we have just 15 years before substantial parts of this heritage become unlistenable and are lost for all time. If we were to continue digitising the collection at the current rate, it would take 48 years to complete.

Music of Sound Incase you missed the news yesterday VCV Rack has launched – when I read their URL I grok it as CV Crack.. and as per the image below, it felt confirmed after my first jam with it last night… Think of it as virtual Eurorack modular, with the initial free release providing basic modules plus a set of Mutable Instruments modules based on the same code as their great Eurorack modules.. At present it is a freestanding app, but there is a plan to provide a VST bridge and I can easily predict this future: there will be a similar explosion of new modules as per what has happened IRL over the last many years. Will this detract from real modular ie IRL? Modules I was most reaching for but could not find: an interesting LFO capable of very slow speeds, a clock divider and a stereo mixer. This patch got up to about 45% of my CPU (iMac 5K iMac w 4GHz i7 & 64GB of RAM) and that CPU button is handy as it shows what % of CPU each module is consuming. Congrats to the developers

Home Studio Corner Have you ever tried to get a nine month old dressed? It’s almost impossible. As you may recall, my wife and I have a three year old boy and twin nine month old girls. It has been a few years since I had to dress a toddler, and it can be so frustrating. The most frustrating part? I remember when my son Owen was able to put his arms through the armholes for the first time without incident. A lot of us are like toddlers when it comes to working in the studio. However, there are some things you don’t know how to do. That’s okay. Those things can be learned. That is why I created my VIP membership. As a member you’ll learn things like: * how to program MIDI drums * how to mix drums * how to record background vocals * how to mix a song in 15 minutes * how to record a great sounding guitar/vocal track …and much more. To get started and to finally put an end to some of that frustration head over to www.HomeStudioCorner.com/VIP Joe Gilder Home Studio Corner P.S.

Moulton Laboratories :: From Stereo to Mono and Back The View from 2005: This is less of a problem now, because there aren’t very many mono radios out there any more, and comparatively few mono TVs. However, good studio craft requires that you at least CHECK to see if you’ve created any truly unacceptable sounds. And, unfortunately, this still happens all too often in live television broadcasts, particularly of sports events. But, why worry? The problem is broadcasting, as manifested by two common items: your basic table radio and your basic television. However, assuming you do want to worry, the mono compatibility problem arises because stereo is an illusion, and the components of that illusion don’t necessarily mix together very well into a single signal. Early Techno-Nerds discussed stereo in terms of A and B instead of Left and Right (don’t ask me why), and I’ve gotten in the habit of using these terms too. So just what is an A-B component? But there’s more. So, A-B and A,-B have some interesting characteristics. Wow. Ben

wire to the ear RA - Tech A master of sound shows us how he tinkers. The app reconfigures the functionality of Native Instruments iPad DJ app for smaller touchscreens. Mon, 29 Apr 2013 / HerrJordan 2 Comments The veteran producer and engineer talks to Music Radar about his approach to the dark art of audio mastering. Left, right and everywhere in between: RA's Jono Buchanan explains how to find space for your sounds. RA's Jordan Rothlein spent a few days in Frankfurt surveying the sights and sounds at Europe's annual music technology showcase. Thu, 11 Apr 2013 / carlosi 9 Comments RA scribe Kristan J Caryl chats to Hypercolour, Defected, Turbo and more about how to make your music stand out to labels. Wed, 10 Apr 2013 / HerrJordan 6 Comments DJ Tech Tools assembled a few simple tips for minimizing the damage you do to your hearing in the DJ booth. Featuring four channels, an on-board soundcard and new effects controls, the mixer brings features from higher-end DJMs to a lower price point. Previous tech stories

Innotune - Electronic Music Podcast & Blog Compressor control principles A short compendium on digital audio compression techniques. Basic compressor configurations Compression vs. limiting Technically speaking the same principles are used in audio signal limiting and compression processors but just the transfer curves and envelope follower settings are different. In digital implementations limiting processors can be more strict due to look-ahead and clever gain prediction functions which guarantees that no peak information passes the threshold. Sidechain routing The audio signal path on which the gain reduction amount is actually computed is called the sidechain. FF and FB sidechains can be combined or mixed if the delay between them is properly compensated. Sidechain filtering can significantly change the behaviour of the gain reduction processing afterwards. Multichannel compression When compressing more then one channel of audio the handling of the sidechain signal can be even more sophisticated. The envelope follower Distortion and sound Advanced techniques