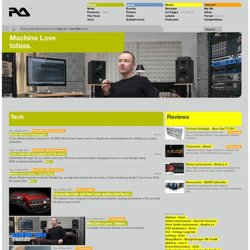 The app reconfigures the functionality of Native Instruments iPad DJ app for smaller touchscreens. Mon, 29 Apr 2013 / HerrJordan 2 Comments The veteran producer and engineer talks to Music Radar about his approach to the dark art of audio mastering. Left, right and everywhere in between: RA's Jono Buchanan explains how to find space for your sounds. RA's Jordan Rothlein spent a few days in Frankfurt surveying the sights and sounds at Europe's annual music technology showcase. Thu, 11 Apr 2013 / carlosi 9 Comments RA scribe Kristan J Caryl chats to Hypercolour, Defected, Turbo and more about how to make your music stand out to labels. Wed, 10 Apr 2013 / HerrJordan 6 Comments DJ Tech Tools assembled a few simple tips for minimizing the damage you do to your hearing in the DJ booth. Featuring four channels, an on-board soundcard and new effects controls, the mixer brings features from higher-end DJMs to a lower price point.

Previous tech stories. Gear Junkies. Home Studio Corner. Have you ever tried to get a nine month old dressed? 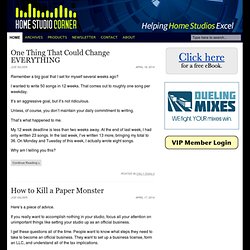 It’s almost impossible. As you may recall, my wife and I have a three year old boy and twin nine month old girls. It has been a few years since I had to dress a toddler, and it can be so frustrating. The most frustrating part? Those pesky, little armholes. I remember when my son Owen was able to put his arms through the armholes for the first time without incident. A lot of us are like toddlers when it comes to working in the studio. However, there are some things you don’t know how to do. That’s okay. Those things can be learned. That is why I created my VIP membership. As a member you’ll learn things like: * how to program MIDI drums * how to mix drums * how to record background vocals * how to mix a song in 15 minutes * how to record a great sounding guitar/vocal track …and much more.

To get started and to finally put an end to some of that frustration head over to www.HomeStudioCorner.com/VIP Joe Gilder Home Studio Corner. Audio Fanzine. Audio Geek Zine. Compressor control principles. A short compendium on digital audio compression techniques. 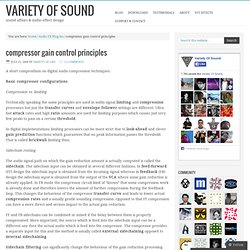 Basic compressor configurations Compression vs. limiting Technically speaking the same principles are used in audio signal limiting and compression processors but just the transfer curves and envelope follower settings are different. Ultra fast attack rates and high ratio amounts are used for limiting purposes which causes just very few peaks to pass on a certain threshold. In digital implementations limiting processors can be more strict due to look-ahead and clever gain prediction functions which guarantees that no peak information passes the threshold. Sidechain routing The audio signal path on which the gain reduction amount is actually computed is called the sidechain. FF and FB sidechains can be combined or mixed if the delay between them is properly compensated. Sidechain filtering can significantly change the behaviour of the gain reduction processing afterwards. Multichannel compression The envelope follower. In The Studio: Recording The Bass Amp. Today everyone is conditioned to go direct with the bass guitar that many times miking a bass amp is completely overlooked. 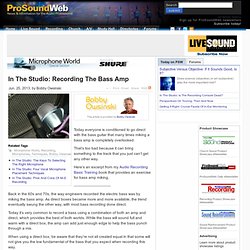 That’s too bad because it can bring something to the track that you just can’t get any other way. Here’s an excerpt from my Audio Recording Basic Training book that provides an exercise for bass amp miking. Back in the 60s and 70s, the way engineers recorded the electric bass was by miking the bass amp. As direct boxes became more and more available, the trend eventually swung the other way, with most bass recording done direct. Today it’s very common to record a bass using a combination of both an amp and direct, which provides the best of both worlds.

When using a direct box, be aware that they’re not all created equal in that some will not give you the low fundamental of the bass that you expect when recording this way.