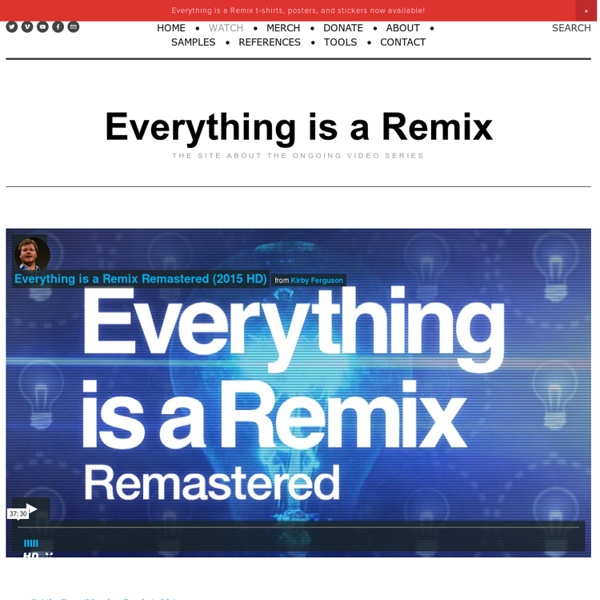 For the first time, the whole series as a single video in HD. In the five years since the series launched, Everything is a Remix has been viewed over two million times and produced a popular TED Talk. Amazingly, Remix continues to change the way people think about creativity, originality, and copyright. To celebrate the five year anniversary, I've polished up the original four parts and merged them into a single video. For the first time now, the whole series is available as a single video with proper transitions all the way through, unified styling, and remixed and remastered audio. Part One has been entirely rebuilt in HD. Join my email list to get occasional notifications about new work

What teens really want to know about sex On the first day of my Sexuality and Society class, I don’t pass around anatomy drawings. I don’t hand out pamphlets about safer sex, although those are stacked on a table near the door. Instead, the first thing I do is establish ground rules. People should speak for themselves, laughter is OK, we won’t ask “personal history” questions, and we’ll work to create a community of peers who care about and respect one another. Only then can we get to work. Louis Theroux: Most Hated Family in America The Most Hated Family in America is a TV documentary written and presented by the BBC’s Louis Theroux about the family at the heart of the Westboro Baptist Church. At the heart of the documentary is the Westboro Baptist Church (WBC), headed by Fred Phelps and based in Topeka, Kansas. It runs the website GodHatesFags.com,[1] and GodHatesAmerica.com, and other websites expressing condemnation of LGBT, Roman Catholics, Muslims, Jews, Sweden, Ireland, Canada, The Netherlands, and other groups. The organization is monitored by the Anti-Defamation League,[2] and classified as a hate group by the Southern Poverty Law Center.[3][4] The group has achieved national notice because of its picketing of funeral processions of U.S. soldiers killed in action in Iraq and Afghanistan.

The Surprising Realities Behind What Motivates Us in Illustrated Form - Lifehacker @Blueluck: Very true - I've seen other countries where people leave their family in another country to go find work, and then to manual labor for extremely cheap just to be able to send it all home to their family. I guess that could be interpreted as their purpose, but the work is not purposeful in and of itself. I guess "pay enough to take money off the table" covers that, so we're only talking about how to motivate people after they're at the comfortable level most Americans that read this blog are at. Interesting results in India, though.

Reconstructing the structure of the world-wide music scene with Last.fm Reconstructing the structure of the world-wide music scene with Last.fm Inspired by the Internet mapping efforts of the Opte Project, I decided to investigate how does the network of musicians look like. Those ugly hairballs below are the results. Okay, they do not look as nice as the Internet maps, but the tree-like structure of the Internet must have helped a lot to create thosefancymaps. Schizophrenia Revealed To Be 8 Genetically Distinct Disorders Just over 1 percent of the American population has been diagnosed with schizophrenia, a severe mental disorder that causes debilitating symptoms including paranoid delusions, auditory hallucinations, and impaired social behavior. A new study has revealed that schizophrenia is not one disease, but eight disorders with genetically distinct causes. This could dramatically change how schizophrenia is diagnosed and treated. The research was led by C.

The Fox Is Black » Bach’s Cantata 147, ‘Jesu, Joy of Man’s Desiring’ Played On a Giant Wooden Xylophone In a Forest This is probably the largest, least creative title for a post ever, but it’s also one of the most descriptive as well. The video is a commercial by DOCOMO for the Touch Wood SH-08C, a limited edition phone of which there are only 15,000 being made. But honestly I could care less about the phone, this commercial is a thousand times more cool. By combining lord knows how many pieces of wood, they were able to make a long, downhill track that was able to reproduce Bach’s Cantata 147, Jesu, Joy of Man’s Desiring. This is a pretty phenomenal achievement and a beautiful piece of art. Huge props to Invisible Designs Lab’s Kenjiro Matsuo for making this crazy idea reality.

Our Use Of Little Words Can, Uh, Reveal Hidden Interests Katherine Streeter for NPR One Friday night, 30 men and 30 women gathered at a hotel restaurant in Washington, D.C. Their goal was love, or maybe sex, or maybe some combination of the two. They were there for speed dating. Eye Candy: Mesmerizing Swinging Balls Video Not mine -- mine are hypnotizing. This is a video of one of those swinging ball desk toys (aka Newton's Cradle) but with different length droopers (mine drag on the floor), creating all sorts of crazy-ass designs. I just watched it twice back to back (the second time with my eyes unfocused) and I'm pretty sure I spotted the secret to the universe at one point. SPOILER: It was a pop-up porn ad. "A gay one?" Four hunks in a bubble bath!