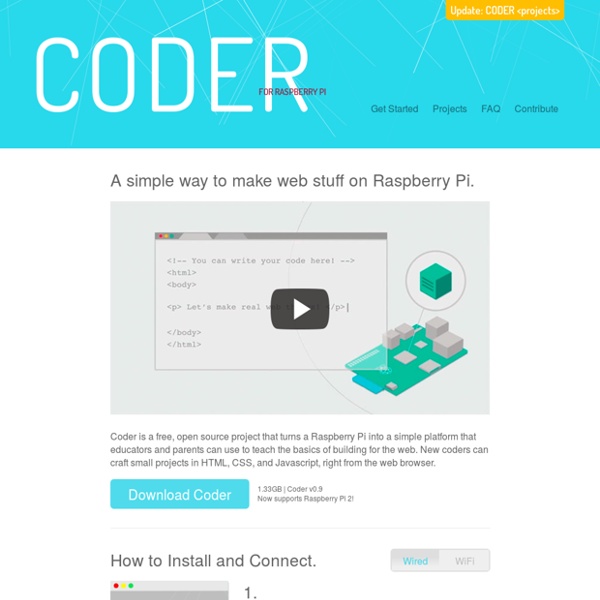 A simple way to make web stuff on Raspberry Pi. Coder is a free, open source project that turns a Raspberry Pi into a simple platform that educators and parents can use to teach the basics of building for the web. New coders can craft small projects in HTML, CSS, and Javascript, right from the web browser. Download Coder 1.33GB | Coder v0.9Now supports Raspberry Pi 2! How to Install and Connect. Download, unzip, and run the Coder Installer. Mac users, just run the provided installer.PC users, check out our Windows-specific Instructions for more installation details. Insert your new Coder SD card into your Pi, make sure your Pi and your computer are plugged into the network, and power it up. The Pi will be your new web server. On your computer, visit in Chrome to connect to your new Coder and start playing. [Note: You will see a warning about Coder's certificate. Download and run the Coder Installer with any 4GB SD Card. Getting to Know Coder. Click on any app to open it up. 5V 1A Power Supply

Raspberry Pi SSH Login without Monitor Raspberry Pi SSH Login without Monitor The Raspbian "wheezy" distro we have been using comes with SSH telnet access enabled, and this is a great way to get terminal access to your Raspberry Pi without having to hook it up to a monitor and keyboard. All you need connected to your Raspberry Pi is the power and an internet connection. By default the Raspberry Pi will be allocated an IP address by your router. Ask Ars: Why are some programming languages faster than others? In our look at scientific computing and the continued longevity of Fortran in science and engineering circles, one of the recurring themes in the discussion that followed was performance. One of the big reasons that Fortran remains important is because it's fast: number crunching routines written in Fortran tend to be quicker than equivalent routines written in most other languages. The languages that are competing with Fortran in this space—C and C++—are used because they're competitive with this performance.

RasWIK - Wireless Inventors Kit for the Raspberry Pi Details Category: Radio projects using XRF, ERF, URF & SRF's Last Updated on Wednesday, 04 September 2013 13:03 RasWIK introduction License Version 2.0, January 2004 1. Definitions "License" shall mean the terms and conditions for use, reproduction, and distribution as defined by Sections 1 through 9 of this document. "Licensor" shall mean the copyright owner or entity authorized by the copyright owner that is granting the License.

Raspberry Pi starter kit aims to inspire IoT innovation 04 September 2013 Internet of Things (IoT) manufacturer Ciseco has taken the wraps off a new Raspberry Pi inventor's kit called RasWIK. The 88 piece kit provides simple step by step instructions for Raspberry Pi users to create their own wireless devices; without the need for configuration or even writing code. According to Ciseco, users can create anything from a simple traffic light to a battery monitor, or even a temperature gauge that sends data to the Xively IoT cloud so billions can access the data. "With RasWIK, our aim is to ignite the inventor in everyday people," said Ciseco founder Miles Hodkinson. Angling to develop for Google Glass? Google gives some insight If you’re looking for a taste of what it will be like to develop for Google Glass, the company posted a video demonstrating the hardware and a little bit of the API on Thursday. Timothy Jordan, a senior developer advocate at Google, gave a talk at SXSW in early March that lasted just shy of an hour and gave a look into the platform. Google Glass bears more similarity to the Web than the Android mobile operating system, so developing for it is simpler than creating an Android application. During the talk, Jordan goes over some the functionality developers can get out of the Mirror API, which allows apps to pop Timeline Cards into a user’s view, as well as show new items from services the user might be subscribed to (weather, wire services, and so forth). Jordan also shows how users can interact with items that crop up using the API. When the user sees something they like, for instance, they can re-share it with a button or “love” it.

MR3020 Download the firmware update that applies to the type of router that you are using to build your LibraryBox. Pay special attention to the Version # of the hardware, as some of these have a v1 and v2 where the hardware changes and a different firmware is needed. Download the LibraryBox v2.0 Install folder (as zip file) MD5 Hash: 59423526AE160107E60265C212904E1E Unzip the install_librarybox.zip file, so that you are left with an install folder, and copy both the install folder AND the firmware file onto your FAT 32 formatted USB stick. Import and Export Bulk Data by Using the bcp Utility (SQL Server) This topic provides an overview for using the bcp utility to export data from anywhere in a SQL Server database where a SELECT statement works, including partitioned views. The bcp utility (Bcp.exe) is a command-line tool that uses the Bulk Copy Program (BCP) API. The bcp utility performs the following tasks: Bulk exports data from a SQL Server table into a data file.

Lazy evaluation The benefits of lazy evaluation include: Performance increases by avoiding needless calculations, and error conditions in evaluating compound expressionsThe ability to construct potentially infinite data structuresThe ability to define control flow (structures) as abstractions instead of primitives Lazy evaluation is often combined with memoization, as described in Jon Bentley's Writing Efficient Programs.[4] After a function's value is computed for that parameter or set of parameters, the result is stored in a lookup table that is indexed by the values of those parameters; the next time the function is called, the table is consulted to determine whether the result for that combination of parameter values is already available. clumsy, an utility for simulating broken network for Windows Vista / Windows 7 and above Releases Notice: clumsy only support Windows Vista, Windows 7 and above. 64bit Windows users are strongly recommanded to download the 64bit build. 32bit: clumsy-0.1-win32.zip (MD5:b8eb28c399f15f02112f5461f6465153) 64bit: clumsy-0.1-win64.zip (MD5:e75419e28321cdc2cb4ca6f9e4044fd0)

The Gambas Project: It's Like Visual Basic On Linux Gambas is an open-source development environment based on a Basic interpreter and with support for object extensions. It's been compared to Visual Basic, but Gambas supports Linux and is GPLv2 software. A developer behind Gambas is a Phoronix fan and recently pointed out his project that goes by the tag line "Gambas Almost Means BASIC!" The premise behind the project is to have a graphical development environment based on BASIC that's almost as eays to use as Microsoft's Visual Basic. However, Gambas isn't trying to achieve any Visual Basic re-implementation or compatibility: it's just comparing itself to VB in terms of ease of use, etc.

Bitcoin Charts / Markets API Bitcoincharts provides a simple API to most of its data. You can use this API to include markets data in your websites, mobile apps or desktop applets. Please remember to add a link to Bitcoincharts! Bitcoincharts' API is accessable through HTTPParameters are passed using GET-requestsreturned data is JSON encodedDon't query more often than once every 15 minutes!