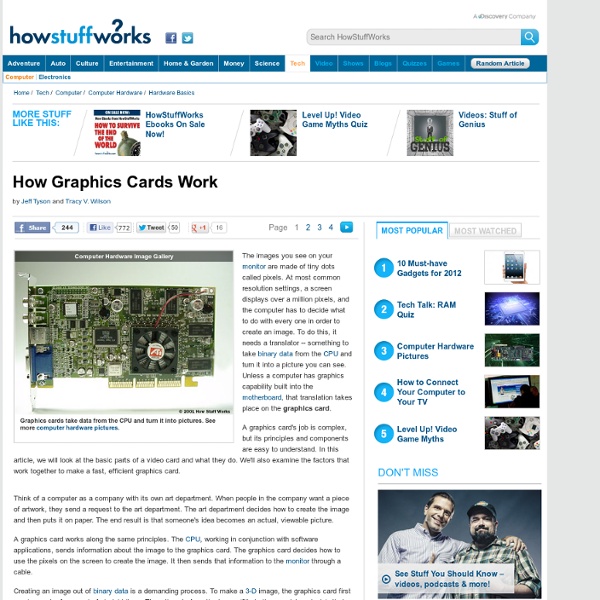 The images you see on your monitor are made of tiny dots called pixels. At most common resolution settings, a screen displays over a million pixels, and the computer has to decide what to do with every one in order to create an image. To do this, it needs a translator -- something to take binary data from the CPU and turn it into a picture you can see. Unless a computer has graphics capability built into the motherboard, that translation takes place on the graphics card. A graphics card's job is complex, but its principles and components are easy to understand. In this article, we will look at the basic parts of a video card and what they do. Think of a computer as a company with its own art department. A graphics card works along the same principles. Creating an image out of binary data is a demanding process. The graphics card accomplishes this task using four main components: Next, we'll look at the processor and memory in more detail.

Pack a Backpack for Camping From Wired How-To Wiki A well-packed sack will save your back. Photo by The Glasshalffull via Flickr. It's happened to everyone before. Then, six miles out, you realize: Despite stuffing your pack to the brim, you've forgotten your rain shell and soaked your food in fuel. This article is part of a wiki anyone can edit. Outside In Especially with a lightweight backpack, you should put your sleeping pad in first. Sleeping bag next Pack in the reverse order of stuff you'll need. Distribute your supplies Tent: Heaviest items go in the middle and closest to your back. Cooking Gear: If you're planning on hot meals along the side of the trail, your portable stove is up next. Food: Separate your foods— easy access:trail mix, string cheese, sandwiches -- and put them in a separate and more easily accessible part of your backpack, usually the detachable fanny pack or outside pockets. Water for cooking food: Dried food is good if you're near water, and canned is good if you're not. Balance it out

42 Practical Ways To Improve Yourself - Stepcase Lifehack Are you someone who likes to grow? Do you constantly seek to improve yourself and become better? If you do, then we have something in common. I’m very passionate about personal growth. It was just 4 years ago when I discovered my passion for growing and helping others grow. At that time, I was 22 and in my final year of university. SEE ALSO: How to Better Yourself One Day at a Time After 1.5 years of actively pursuing growth and helping others to grow through my personal development blog, I realize there is never an end to the journey of self improvement. As a passionate advocate of growth, I’m continuously looking for ways to self-improve. Read a book every day. I’d love to hear your thoughts on this article or anything about personal growth. Image © kevindooley

50 Kick-Ass Websites You Need to Know About It's time to update the entries in your browser's links toolbar. But with recent estimates putting the size of the internet at well more than 100 million distinct websites, it's getting harder and harder to get a handle on all the great stuff that's out there. That's why we've compiled this list. And unlike some lists you may have seen, which try to name the very "best" websites, but end up just telling you a lot of stuff you already know, we've chosen instead to highlight 50 of our favorite sites that fly under most people's radar. You might have heard of some of these sites, but we'll bet you haven't heard of all them. Demoscene.tv See What Can Be Done with 4 Kilobytes If you’re any kind of nerd at all, you probably know about the demoscene, where talented programmers create complex videos rendered in real-time, stored in incredibly small files. But what if you just want to see what all the fuss is about without actually downloading and running an executable? lite.Facebook.com

How to Fix (or Kill) Web Data About You Marketers, employers, suitors and even thieves and stalkers are piecing together mosaics of who we are. Even when it is accurate, it may not present a pretty picture. For a glimpse of your mosaic, type your name into Spokeo.com. Snoops who take the time to troll further online may also find in blog posts or comments evidence of your political views, health challenges, office tribulations and party indiscretions, any of which could hurt your chances of admission to school, getting or keeping a job or landing a date. The online aggregation of personal data is setting the stage for “a for your life,” said Michael Fertik, the chief executive of Reputation.com, previously known as ReputationDefender, a company that charges to manage people’s online information and images. If you want to try to manage privacy, the obvious first place to start is with the search engines , Bing and , exactly where other people will most likely go to check you out. The harder part is masking the information.

How To Not Get Sued for File Sharing (And Other Ideas To Avoid Being Treated Like a Criminal) As of July 2006, the Recording Industry Association of America (RIAA) has sued over 20,000 music fans for file sharingin just under three years. In 2004, the Motion Picture Association of America (MPAA) joined this misguided, anti-consumer crusade. Filing lawsuits against anonymous "Doe" defendants, the RIAA and MPAA seek to uncover the identities of P2P users and force them to pay thousands of dollars in settlements. Many innocent individuals are being caught in the crossfire. While there is no way to know exactly what the RIAA and MPAA are going to do or who they are going to sue, users of publicly-accessible P2P networks can take the following steps to reduce their chances of being sued: Either: Make sure there are no potentially infringing files in your shared folder. Or: Note: Not all clients allow you to turn off "sharing." Additional Considerations: What if I've Already Been Sued? These links may provide helpful information:

40 Beautiful and Very High-Resolution Wallpapers Do you have a boring desktop wallpaper? Are you tired of looking at the same, old desktop wallpaper? Well, here’s the remedy. This collection contains beautiful, high-quality and high-resolution (at least 1900x1200px) wallpapers. I hope you will find several wallpapers to refresh and invigorate your workspace. How to Hunt Elephants MATHEMATICIANS hunt elephants by going to Africa, throwing out everything that is not an elephant, and catching one of whatever is left. EXPERIENCED MATHEMATICIANS will attempt to prove the existence of at least one unique elephant before proceeding to step 1 as a subordinate exercise. PROFESSORS OF MATHEMATICS will prove the existence of at least one unique elephant and then leave the detection and capture of an actual elephant as an exercise for their graduate students. COMPUTER SCIENTISTS hunt elephants by exercising Algorithm A: Go to Africa. EXPERIENCED COMPUTER PROGRAMMERS modify Algorithm A by placing a known elephant in Cairo to ensure that the algorithm will terminate. ASSEMBLY LANGUAGE PROGRAMMERS prefer to execute Algorithm A on their hands and knees. DATABASE ADMINISTRATORS do not need to go out and capture elephants when they can retrieve them simply with an ad hoc query: STATISTICIANS hunt the first animal they see N times and call it an elephant.

Tips for Linux Explorers Online Books : "The Essential Psychedelic Guide" - Ecstasy INTENSITY: 2 to 4 MATERIAL: Ecstasy is a synthetic compound developed in 1914 as a potential dietary aid. However, its psychoactive effects were not discovered until the mid-Seventies. It was used widely in therapy from this time until 1985 when it was made illegal. Its chemical name is 3,4-methylenedioxymethamphetamine (MDMA), commonly known as "X", "E", or "Adam." It usually comes as a white crystalline powder or made into tablets. DOSAGE: 125 mg. (1/8th of a gram) is generally considered a single dose of ecstasy. THE HIGH: When ecstasy is coming on it feels fantastically exhilarating. Most X users report that their first couple of experiences are like being in heaven, and leave a strong impression. Ecstasy is not really "psychedelic" in the same way as other substances in this journal. Ecstasy rarely produces a bad experience, but there are some negative aspects to ecstasy's signature. I've read numerous clinical articles on ecstasy. See the 2C-B chapter. 1.