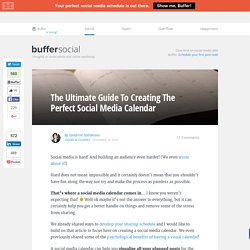 And building an audience even harder! (We even wrote about it!) Hard does not mean impossible and it certainly doesn’t mean that you shouldn’t have fun along the way nor try and make the process as painless as possible. CrowdFire: It Will Make You into a Social Media Hero Live And Social. Formerly known as JustUnfollow, Crowdfire is an app that is also available for desktop that can help you totally change your social media following and followers. 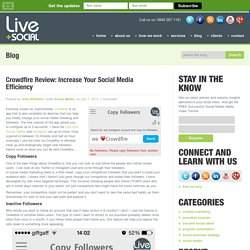 The free version of the app allows you to configure up to 2 accounts, I have the Live And Social Twitter and Instagram set up on mine. Over a period of between 15 minutes and half an hour everyday I use the tools on Crowdfire to develop, clear up and strategically target new followers. Meet Sombrero, Your Personal Social Media Marketing Trainer. Small businesses benefit a lot from social media marketing, provided they do it right. 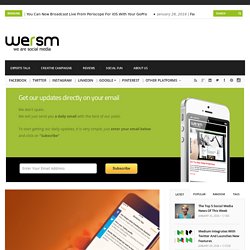 All too often though, have we seen small businesses try it, only to give up on it very quickly. Some don’t see the immediate benefits they were hoping for, others find it too difficult to manage. Whatever the issue might be, people are not getting the most from their efforts. That’s why Sotrender has introduced Sombrero: Your personal social media marketing trainer! Also Read: Twitter Opens Flight School To All Users Sombrero is a free mobile app that will help kick off any SMB’s SMM efforts. If you like our stories, there is an easy way to stay updated: Sombrero covers Facebook, Twitter, Instagram and blogging for now, but each channel presents a series of 15-minute tasks that will teach you how to use each. If you want to monitor your progress, you can do so too. 3 Soon-to-be-Everywhere Social Media Trends You Can Profit on in 2016.

What is the next big wave of social media? 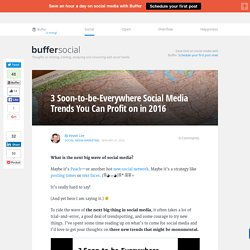 Maybe it’s Peach—or another hot new social network. Maybe it’s a strategy like posting times or text faces. (ﾉ◕ヮ◕)ﾉ*:･ﾟ✧ It’s really hard to say! (And yet here I am saying it.) To ride the wave of the next big thing in social media, it often takes a lot of trial-and-error, a good deal of trendspotting, and some courage to try new things. 1. You can buy stuff straight from your News Feed! E-commerce has felt a bit like a missing piece from the social media feeds. Consultant Webmarketing : Comment déterminer le prix de vos prestations. 19 Free Social Media Analytics Tools for Marketers. We’ve refreshed this post for 2017, check out the latest and greatest social media analytics tools below. ? 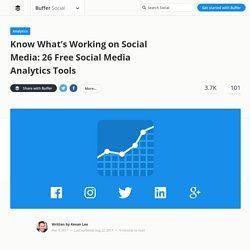 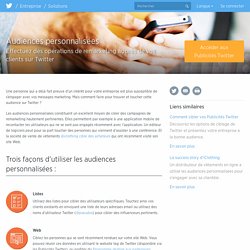 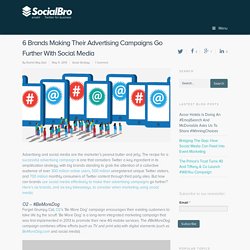 The recipe for a successful advertising campaign is one that considers Twitter a key ingredient in its amplification strategy, with big brands standing to grab the attention of a collective audience of over 300 million active users, 500 million unregistered unique Twitter visitors, and 700 million monthly consumers of Twitter content through third party sites. Here Are the Top-Performing Fast Fashion Brands on Social. The climax of the famous speech by Miranda Priestly (played by Meryl Streep) in the 2006 fim, The Devil Wears Prada, is that the sweater Anne Hathaway’s character is wearing has slowly trickled down over the years from high-end runway to “some tragic Casual Corner where you, no doubt, fished it out of some clearance bin.” 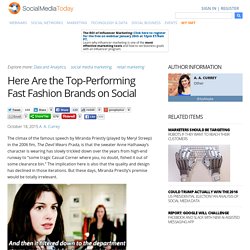 The implication here is also that the quality and design has declined in those iterations. But these days, Miranda Priestly’s premise would be totally irrelevant. The Best (And Worst) Times To Post On Social Media (Infographic) Sundar Pichai is huddling with five Google staffers in a room next to his office that’s known—appropriately enough—as "Sundar’s Huddle. 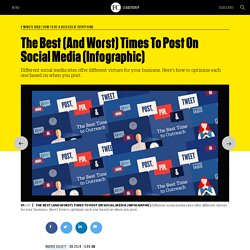 " The employees are members of the Google Photos team, and they’re here this morning to update Pichai on something they’ve been working on for months. The group has barely begun its presentation when Pichai starts peppering them with questions, opinions, and advice. For half an hour, the discussion careens from subject to subject: the power of artificial intelligence, the value of integrating Google Photos with other products such as Google Drive, the importance of creating an emotional bond with the users of an app.

After the team shows Pichai a rough cut of a promotional video, his feedback is unguarded and heartfelt: "That’s awesome! " Google’s bearded, 44-year-old CEO is, unmistakably, in his element. Pichai’s tone at the meeting—affable, engaged, ambitious—encapsulates his approach to running Google. Pichai took charge at a pivotal moment. Here's The Best Time To Post A Photo On Instagram. If you want people to like your Instagrams, the most ideal time to post is at 5 p.m. 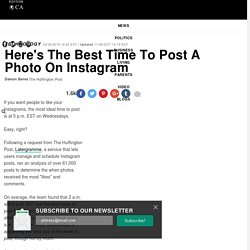 EST on Wednesdays. Easy, right? Following a request from The Huffington Post, Latergramme, a service that lets users manage and schedule Instagram posts, ran an analysis of over 61,000 posts to determine the when photos received the most "likes" and comments. On average, the team found that 2 a.m. and 5 p.m. EST are the best times to post if you want your followers to pay attention to you; the worst times are 9 a.m. and 6 p.m. Here Is an Hour-By-Hour Breakdown of When People Post on Instagram. Instagram on Tuesday revealed that it now has 400 million monthly users, up 100 million since the beginning of this year. And those users, many of who are millennials, post 80 million photos to the social platform every day. So a study by Mavrck—which analyzed 1.3 million Instagram posts—should get brands' attention. It explores, among other things, the best times of day to share a message on the visual platform.

While Mavrck didn't offer engagement data, the Boston-based company advised that marketers might get greater engagement between 6 a.m. and 12 p.m. The Best Times to Post on Social Media  When is the best time to post on social media? Everyone wants to know the best times for getting the highest engagement on social media channels. Posting the right content at the right time can make the difference between getting lots of valuable comments on your post and clicks on your links or no engagement at all.

The best time to post on social media depends on a variety of factors, including the region you're targeting, the type of information you post, the platform, your target audience and how they interact with the platform. This means different businesses may find different times of the day work best for them. Here are some general guidelines for the best times to post on Twitter, Facebook and LinkedIn. The Best Times to Post to Social Media. Facebook Studies show that weekend posts get 32% more engagement on Facebook. However, there is some debate over the best time to post. Some say 1:00pm while others say 3:00pm, but the implication is that posts in the early afternoon receive more engagement.