Ravenclawgirl29: ask-an-mra-anything: ... Is it ur body. Body autonomy. House Passes Anti-Abortion Bill On Anniversary Of Roe v. Wade. On the 42nd anniversary of the Supreme Court's landmark abortion rights decision in Roe v. 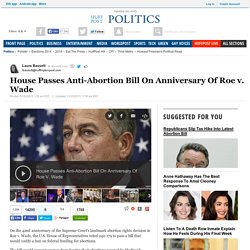 Wade, the U.S. House of Representatives voted 242-179 to pass a bill that would codify a ban on federal funding for abortions. The bill would prevent women from having their abortions covered by Medicaid; restrict a woman's ability to buy private insurance plans that include abortion coverage; and deny small businesses a tax credit, which they currently receive through the Affordable Care Act, if they include abortion care in their health insurance plans. It would also prevent the District of Columbia from using its own local funds to subsidize abortion care. Democrats tried to use a procedural move Thursday to sink the bill or send it back to committee. Social conservatives celebrated the move. Republicans skipped the committee process and brought the bill to the floor as a substitute for the bill they were supposed to vote on Thursday, a ban on abortions after 20 weeks of pregnancy.

This Is How Judges Humiliate Pregnant Teens Who Want Abortions. Pregnant minors who fear their parents can turn to a judge if they want an abortion. 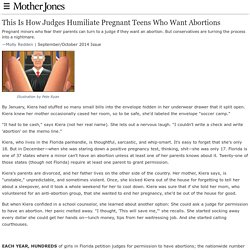 But conservatives are turning the process into a nightmare. Illustration by Pete Ryan By January, Kiera had stuffed so many small bills into the envelope hidden in her underwear drawer that it split open. Kiera knew her mother occasionally cased her room, so to be safe, she'd labeled the envelope "soccer camp. " "It had to be cash," says Kiera (not her real name).

Kiera, who lives in the Florida panhandle, is thoughtful, sarcastic, and whip-smart. Kiera's parents are divorced, and her father lives on the other side of the country. But when Kiera confided in a school counselor, she learned about another option: She could ask a judge for permission to have an abortion. EACH YEAR, HUNDREDS of girls in Florida petition judges for permission to have abortions; the nationwide number is likely in the thousands.

A Devastating Loss For Texas Women. Today is one of the worst days in my professional career. 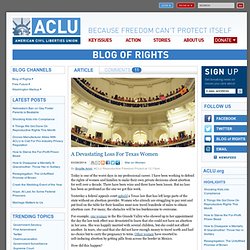 I have been working to defend the rights of women and families to make their own private decisions about abortion for well over a decade. There have been wins and there have been losses. But no loss has been as profound as the one we got this week. Yesterday a federal appeals court upheld a Texas law that has left large parts of the state without an abortion provider.

Women who already are struggling to pay rent and put food on the table for their families must now travel hundreds of miles to obtain abortion care. For example, one woman in the Rio Grande Valley who showed up to her appointment the day the law took effect was devastated to learn that she could not have an abortion in her area. How did this happen? Despite overwhelming opposition, lawmakers in Texas passed a bill that requires doctors who provide abortion to have admitting privileges at a local hospital. You might start by asking who proposed this law. THE PRO-CHOICE ACTION NETWORK. By Joyce Arthur First published in "Humanist in Canada," No. 90 (Vol. 22, #3) Autumn, 1989. 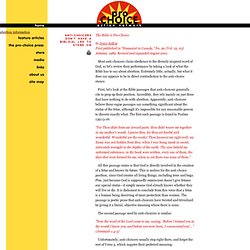 Revised and expanded August 2001. Most anti-choicers claim obedience to the divinely inspired word of God, so let's review their performance by taking a look at what the Bible has to say about abortion. Extremely little, actually, but what it does say appears to be in direct contradiction to the anti-choice stance. First, let's look at the Bible passages that anti-choicers generally cite to prop up their position.

Incredibly, they rely mainly on just three that have nothing to do with abortion. "For Thou didst form my inward parts; thou didst weave me together in my mother's womb. All this passage states is that God is directly involved in the creation of a fetus and knows its future. "Now the word of the Lord came to me, saying, 'Before I formed you in the womb I knew you, and before you were born, I consecrated you'... " This passage simply records a fetus kicking in the womb. There we have it.