A Beginner's Guide To Making Your First Video Game 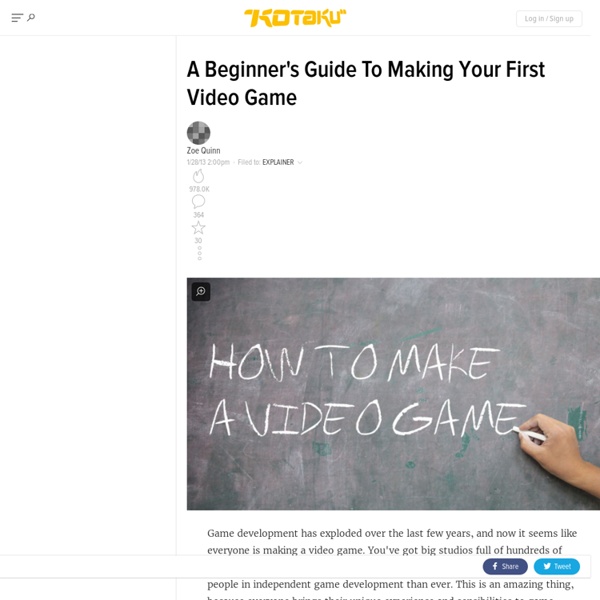 Hey Gazp, I know the feeling of being "paralyzed by anxiety" - especially about something you're really passionate about! I've worked on a pair of student projects that put out decent "student" games (one a team of 7, the other a team of 20), and I was honored to be the Producer/Co-Director on both projects. Since you sound like primarily an artist with a bit of programming jive, my first advice to you is simple - you need a full programmer. Find someone who is reliable and open to ideas, and who is just as excited about your project as you are. You will find a lot of flakes - shop around until you find someone who is going to stick through to the end and isn't an emotional drain when it comes to collaborative work.

» Twine Resources PORPENTINE Twine is a simple but powerful game creation tool focused on hypertext. Anyone who can use a text editor can use Twine. When a game is finished, it generates an HTML file that can be played by anyone with a browser. PixelProspector - the indie goldmine 1.1 Getting Started Guide 1.2 The Big List of Game Making Tools 1.3 Video Game Development Forums 2.1 Showcase of Games made with Game Making Tools 2.2 Big List of Video Game Documentaries

The Creative Process: Indie vs AAA - The Astronauts My name is Adam Bryla, and I am a graphic artist at The Astronauts. Welcome to my very first blog post! Even though this post is in parts about indie game making, it’s not about the fun of going to the movies or Jeff’s together, nor about drinking alcohol during the work hours – i.e. it’s not about how cool it is to be an indie. It’s about the differences between creative work in a big AAA studio and a small indie one. I had a chance to be in both, and I’d love to share my thoughts with you. After a certain production involving the team of over fifty developers, and a life inside a machine fed daily with a lot of paperwork, the way we work on The Vanishing of Ethan Carter surprised me.

Tutorial on 9845 Game Design Why and How As long as automated data processing exists, implementing games on computer systems had been one of the most deeply settled desires of any computer programmer. One reason of course is the challenge. Games always had been the killer applications for each computer generation, especially within the personal computer domain. This was true with the very first systems and still is one of the most important driver for the development of faster personal computer systems. Wereas real mainframes were most of all number crunchers and excelled primarily on pure computation tasks like chess algorithms, workstations and as such the HP 9845 were in the middle between home computers and mainframes.

Why we need to kill gameplay to make better games - The Astronauts We love video games for being video games, right? At least that’s what I thought all my life. But after a reboot of my designer brain happened, I was stunned with the discovery that it might not necessarily be true. I mean, I still like video games when they are video games. It’s just that I love them when they are not. Let’s do a little experiment. Scalable Game Design wiki Frogger is a good first game design activity for students with no programming background. Journey is designed to present several computational thinking patterns in an incremental fashion. Sokoban is a good second game design activity for students who have already completed the Frogger tutorials. PacMan is a good first game design activity for high school students with no programming background. More games: Space Invaders Sims-like games AgentCubes games (3D) coming soon! The Contagion simulation approximates how contagions are spread among humans who are in close proximity to one another.

Empire State Building by Google 3D Warehouse 3D Warehouse Advanced Search Sign In Error Download Downloads The Big List Of Game Design Book Recommendations: Game Design Books: Articles about Gameplay Mechanics Discussions Where The Bad Bullets Go: Sine Mora Out Now By Adam Smith on November 12th, 2012 at 1:00 pm. We did acknowledge the port of side-scrolling time-bending shooter Sine Mora a couple of weeks ago, but now that the game is out, perhaps you’d like to see a PC launch trailer? I played the game on the 360th Box and even though my bullet-dodging skills are more like those of a lobby security goon than a KeaNeo, I actually managed to complete it.

The Worst Game Feature Ever » Level 99 Games We play games–all kinds of games from sports to board games to video games–in order to do. When you play a game, your choices will hopefully determine your ultimate success or failure. Those who make the best choices or perform most successfully will have an advantage to win the game (if not guaranteed victory, in games that do not utilize randomness as a mechanic). So what is the worst feature you can pack into a game? Execution Labs raises $1.4M to incubate indie mobile game studios in Canada Canada has been creating huge numbers of jobs in the video game industry. But many of those have been at huge game publishers such as Ubisoft. Execution Labs hopes to change that by creating an incubator for emerging Canadian mobile game studios. Execution Labs has raised $1.4 million to create its game studio incubator in Montreal.

Escape the Room Kit - Learn how to make your own 'Escape the Room' game. Welcome to the first Flash Classroom Resource Kit for classroom use. This kit has been designed to contain all you'll need to be able to begin the adventure with game design in your classroom. The kit supports teachers and students using Flash 8. An Overview of Escape the Room Games In 1994, Japanese game developer Toshimitsu Takagi released a game called 'Crimson Room' on the internet. Good Rules, Bad Rules » Level 99 Games I played a game last night called Inn Fighting. It was decently complex. The cards had lots of words, there was thick rulebook, and you had to roll 6 dice a turn, then interpret the results, then roll a few more dice, just to get anything done.

You Have an Idea for a Game – Here’s Why Nobody Cares - The Astronauts I guess this blog post was inevitable. I am sure that it’s not the first or the last post on the subject of wanna be game designers, but I am not sure if we were particularly honest with ourselves before. And by “honest” I mean “brutally honest”.