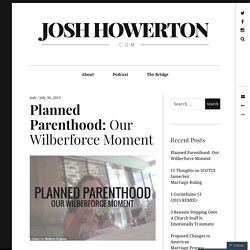 Wilberforce was the Christian man who looked into his Bible, saw that racism and slavery were evil reverse-images of the gospel, and dedicated his life to accomplishing what seemed culturally and politically impossible in late-1700’s Great Britain: the abolition of the slave trade. In a decisive moment that now lives in history, Wilberforce once commanded the floor of British Parliament for over three hours doing nothing but reading gruesome horror-stories of the African slave trade to the men that politically protected its continuation and then concluded with this sentence… “You may choose to look away, but you can never say again that you did not know.”– William Wilberforce 1.

This is not a political issue. 2. 3. 4. 5. 6. 7. 8. 9. Uple told to abort unborn baby son celebrate his first birthday. Jett Morris' mother's waters broke just 20 weeks into the pregnancy Doctors declared pregnancy was non-viable and advised she have abortionBut Jett's parents defied doctors' advice and Jett was born at 25 weeksWeighed just 1.4lb - less than a bag of sugar - and had lung problemsHe is now thriving and his parents have been assured he is healthyThey now fear other parents are wrongly being told to have a termination By Anna Hodgekiss for MailOnline Published: 14:14 GMT, 5 January 2015 | Updated: 16:23 GMT, 5 January 2015 He was born weighing less than a bag of sugar and smaller than his father's hand. 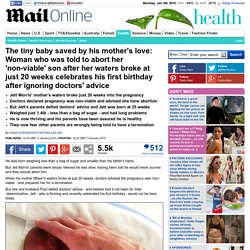 When The Unborn Doesn't Go Quietly To His Execution, "Tiny Tim" Skip to comments. 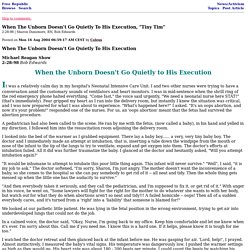 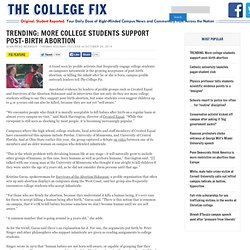 Chinese father of four commits suicide over one-child policy fines so his children can go to school. WANTUN, China, May 26, 2014 (LifeSiteNews.com) – A farmer and father of four in southwest China's Guizhou province killed himself after family planning officials fined him the equivalent of almost 3,500 USD when he tried to enroll his children in school, according to British news sources. 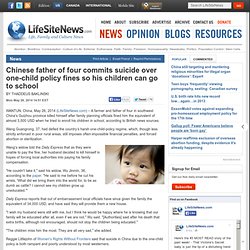 Wang Guangrong, 37, had defied the country’s harsh one-child-policy regime, which, though less strictly enforced in poor rural areas, still imposes often-impossible financial penalties, and forced abortion or sterilization. Wang's widow told the Daily Express that as they were unable to pay the fine, her husband decided to kill himself in hopes of forcing local authorities into paying his family compensation. "He couldn't take it," said his widow, Wu Jinmin, 36, according to the paper. "He said to me before he cut his wrists, 'What did we bring them into the world for, to be as dumb as cattle? I cannot see my children grow up uneducated.'" "The children miss him the most. As Long As It's Healthy.... But What If It's Not?  Six months into our pregnancy with Henry, after our bombshell diagnosis of spina bifida, Lou and I would make regular treks up to Park Ridge to see our Maternal-Fetal Medicine specialist, who kept us abreast on how the baby was doing in utero. 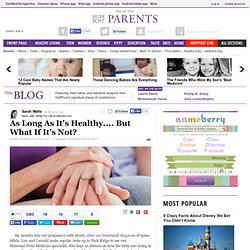 Since I'm ridiculously extroverted and I adore small talk, I started chatting up the receptionist as we were filling out some paperwork, post-appointment (Lou, his usual introvert self, was probably silently willing me to stop talking). At this point, we had already been told by two separate doctors that Henry would be totally paralyzed from the waist down. We started talking about her kids -- three girls! -- and I asked her if she preferred girls, or if she might try for a boy. We both quickly agreed that the baby's sex wasn't really that important -- boy or girl, they were blessings. "Oh, I like girls, but it doesn't matter to me! " 15-year-old girl allegedly locked inside abortion facility rescued by pro-lifer: Report. BUFFALO, NY, May 19, 2014 (LifeSiteNews.com) – An abortion facility allegedly locked a 15-year-old girl in an examining room and expelled her mother from the premises when they changed their minds about going through with an abortion, a nationally prominent pro-life activist has stated. 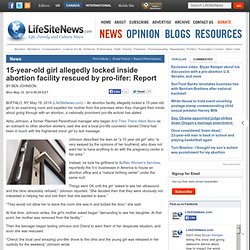 Abby Johnson, a former Planned Parenthood manager who began And Then There Were None as an outreach to other abortion workers, said she and a local pro-life counselor named Cheryl had been in touch with the frightened minor girl by text message. Johnson described the teen as “a 15 year old girl” who “is very swayed by the opinions of her boyfriend, who does not want her to have anything to do with the pregnancy center in her area.”

Instead, he took his girlfriend to Buffalo Women's Services, reportedly the first businesses in America to house an abortion office and a “natural birthing center” under the same roof. “They would not allow her to leave the room she was in and locked the door,” she said. Doctor Who Did 1,200 Abortions Tells Congress to Ban Them. By Steven Ertelt | Washington, DC | LifeNews.com | 5/23/13 12:52 PM National 72.4K Share Dr. Anthony Levatino is a pro-life physician from New Mexico but, before having a change of heart on the issue of abortion he was an OBGYN who also performed abortions. Levatino did as many as 1,200 abortions — some of them after 20 weeks of pregnancy.

Then, after his daughter died in a tragic automobile accident, he re-evaluated his position on abortion and stopped doing abortions. Today, Dr. Levatino’s full testimony before the Subcommittee on the Constitution and Civil Justice appears below: Chairman Franks and distinguished members of the subcommittee, my name is Anthony Levatino. In my 33-year career, I have been privileged to practice obstetrics and gynecology in both private and university settings. During my residency training and during my first five years of private practice, I performed both first and second trimester abortions.

With suction complete, look for your Sopher clamp. ‘We created demand for abortion by pushing sex ed on kids’: former abortion clinic owner. OTTAWA, May 12, 2014 (LifeSiteNews.com) – “How do you sell an abortion? 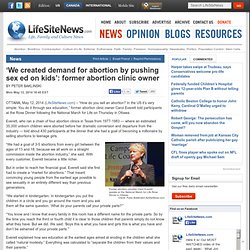 In the US it’s very simple: You do it through sex education,” former abortion clinic owner Carol Everett told participants at the Rose Dinner following the National March for Life on Thursday in Ottawa. Very Surprising Quotes From Abortion Doctors Make it Clear Abortion is Wrong. By Sarah Terzo | Washington, DC | LifeNews.com | 4/25/14 4:24 PM National 2179 Share Abortion. 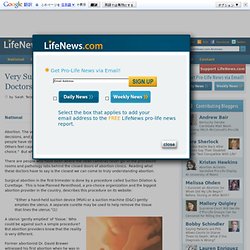 The very word stirs up controversy- thoughts of clashing protesters, emotional decisions, and political conflict. Everyone has heard the slogans and sound bites. I am afraid of this indisputable pro-choice argument. I took the bait. 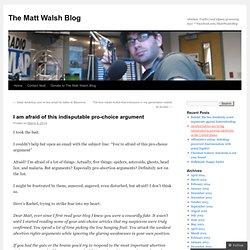 I couldn’t help but open an email with the subject line: “You’re afraid of this pro-choice argument” Afraid? I’m afraid of a lot of things. It’s time to end the stigma of infanticide. On Monday, a federal judge once again descended from Heaven to rule that unborn humans have no right to be protected at all, in any form, for any reason, in any way, against any harm of any kind. He struck down as “unconstitutional” the Texas law that aims to put some basic regulations and limits on abortion practitioners. To quote from his decision: “The government can not interfere in the medical field! DANNENFELSER: Planned Parenthood cranks up abortion mills. Planned Parenthood — America’s largest abortion business — has spent much of the last few years demanding that government add millions more in taxpayer dollars to their coffers, citing their nonprofit status and so-called focus on women’s health. They haven’t been disappointed. In 2011, government subsidies to Planned Parenthood reached an all-time high, with the abortion provider receiving a whopping $542 million in taxpayer funding — all while ending a record number of lives — 333,964.

It might not be a technically incorrect number, but it is meaningless—to the point of being downright silly— for several reasons. Not the least of which being that Planned Parenthood “unbundles” all of its services so that a pack of pills, an STD test and an exam are three separate services. Undoubtedly, some of those services are cheaper than others: To illustrate this, let’s make a comparison with an actual business. Say I open a watch store. 11 Things "Pro-Choicers" Don't Get About Abortion. By Kristi Burton Brown | Washington, DC | LifeNews.com | 9/25/13 1:47 PM Opinion 22.4K Share 1) It’s not about choice; it’s about abortion. I mean, really, what “choice” are we talking about here? The “choice” to what? We’re not debating the “choice” to keep your child and raise him yourself.