Poser Dynamic Clothing Tutorial Conforming to Dynamic. Human Head Modeling [HD] : 牛山雅博. 3d Max Mental ray exterior light & render setup tutorial « MentalRay.tv. Poser Dynamic Cloth Tutorial - Making a Dynamic Shirt and Skirt Set in Poser Cloth Room. This tutorial assumes that you have already made your shirt and skirt in a 3D modelling application such as Wings 3D, Blender, Zbrush, 3ds Max, Cinema 4D, etc. and it picks up at the point where you have imported them into Poser.

When modelling the shirt in your 3D application, make sure you assign separate materials for the collar, the cuffs, and the buttons so you can assign them to the various vertex groups in the cloth room. Also be sure to have a "belt" group of polygons at the bottom of the shirt and assign a separate material to them also which will be important in the cloth simulation.

Do the same for the skirt, assigning a material for the skirt and also a material for the "belt" polygons. If you have not already, you would find it helpful to read the tutorial on how to make a dynamic gown which will familiarize you to the steps we will be using in this tutorial. Creating the Fitted Clothing 1. 2. 3. 4. Running Future Simulations 1. 2. 3. 4. 5. 6. 7. Poser Dynamic Cloth Tutorial - Making a Dynamic Gown for Poser Cloth Simulations. This tutorial assumes that you have already made your gown mesh in a 3D modelling application such as Wings3D, Blender, Zbrush, 3ds Max, etc. It picks up at the point where you have imported the OBJ mesh into Poser. You can preview the finished gown below and the end of this tutorial. Here is the gown mesh I made and imported into Poser. I basically exported the V4 mesh from Poser and imported it into my 3D modelling application and then model the garment while using the imported V4 mesh as a reference base.

When you import your gown mesh into Poser and load your figure, you might find that the mesh does not fit the figure exactly, which is the case in my example here. Next I go into the Cloth room, set up a new simulation for the gown and set V4 as the collision object. Now I run the simulation. Reality2 - Tako Yakida World - CG art using DAZ Studio, Hexagon, Carrara, LuxRender, Reality and Photoshop Elements 9. Beginner's Tutorial and Mini Guide for a Basic Understanding of Reality 2 and LuxRender--Indoor Scene Note: I'm not going to cover all the settings in Reality and Lux but I will covers the one's you would need to know to get started successfully working with these tools. 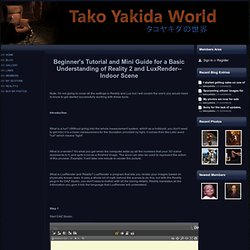 Introduction What is a lux? (Without going into the whole measurement system, which as a hobbyist, you don't need to get into) it is a basic measurement for the illuniation provided by light. It comes from the Latin word "lux" which means "light". What is a render? What is LuxRender and Reality? Step 1 Start DAZ Studio. You will see the default scene with our gray Genesis figure.

For some reason, at least on my system, a new scene loads without a camera. Then from the top-left of your "viewport" (the window where you actually see the objects of your scene) select the camera to look through it. Step 2. Free Webinars - Rendering Tips & Tricks. Free Webinars - How to Create Characters with Character. GenX Plug-in Tutorial - Tako Yakida World - CG art using DAZ Studio, Hexagon, Carrara, LuxRender, Reality and Photoshop Elements 9. Poser Tutorials.

Creating Conforming Clothing For Poser Figures This document covers the creation of Conforming clothing in Poser 6 or later including grouping and rigging. Making Poser clothing is not terribly difficult from a technical standpoint, but there are several things to consider before plunging in and getting started. First, if you plan to make conforming clothing, which is easier to use although harder to make than dynamic clothing, then you need to decide for which figure you are building the clothing.

As we will make clear, different figures have different shapes and in many cases different joint structures, and items of clothing built for one figure generally won't work well- if at all- with another. Poser Pro 2012 and Poser 9 - Launch. Take a Video Tour of Poser Fitting Room to convert your existing clothing and props to fit any figure* Comic Book Preview Mode for color and B&W cartoon illustration and animation Pixar Subdivision Surfaces for fast and efficient scene building Bullet Physics for Soft Body Dynamics, Rigid Body and Hair Morph Brush now supports Sag, Tighten and Loosen so clothing works better Magnets and Deformers with Weight Maps for the ultimate precision *Poser Pro 2014 Feature Buy Now Poser comes with everything you need to create incredible digital art or 3D animation. 3D Characters, Animals, Vehicles, Props, Scenes, Cameras and Lights, all included! 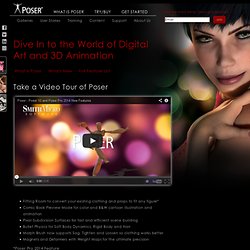 Poser is simple to learn, but powerful. Best of all, it's fun. Create Character Art and Animations in 3 Easy Steps Add 3D Characters & Dress the StageAdd 3D people and characters right from the library. Gigabytes of Content Ready for Action. Poser Tutorials. Clothing Basics This document covers a basic description of clothing in Poser and focuses on Dynamic clothing as used in Poser 6 or later. Requirements: Poser 7 or Poser Pro. There are three types of clothing that Poser uses. First, there's clothing that is "built on" to the figure- the clothes are an integral part of the person, modelled on, and can't be removed or changed much (you can change colors, texture maps, etc., but you can't change the style or really the shape of the clothing.)

Poser Tutorials. Clothing Your Figures in Poser Poser figures use three different types of clothing- here's how to tell which type you've got, and how to use it all! Requirements:Poser 7 is required. What Types of Clothing Do We Have? Poser Tutorials. Material Room: Working With Image Maps Poser's Simple Material Room provides an easy-to-manage interface that allows users to quickly apply basic surface textures to objects and figures. This tutorial will walk through the process of applying an image map in the Simple Material Room. Requirements: Poser 6 is required. Poser 5 introduced the Material Room, a powerful new tool to manage surface textures and image maps.