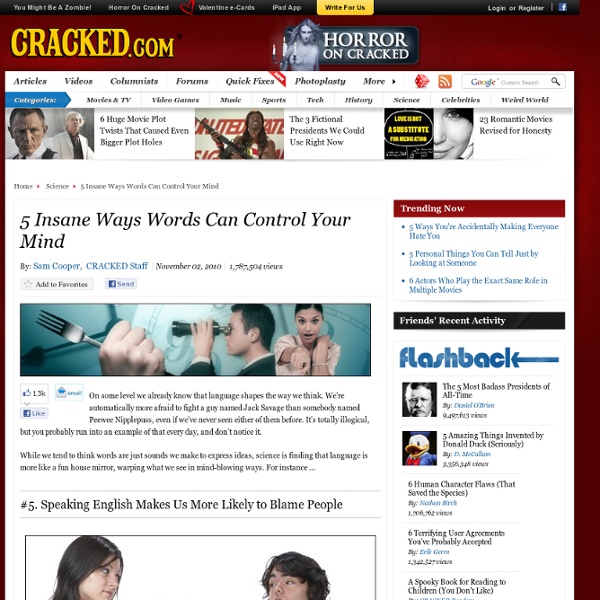 On some level we already know that language shapes the way we think. We're automatically more afraid to fight a guy named Jack Savage than somebody named Peewee Nipplepuss, even if we've never seen either of them before. It's totally illogical, but you probably run into an example of that every day, and don't notice it. While we tend to think words are just sounds we make to express ideas, science is finding that language is more like a fun house mirror, warping what we see in mind-blowing ways. For instance ... Speaking English Makes Us More Likely to Blame People Let's say your roommate Steve is jumping on your bed. How will you answer? Keep in mind, Steve pulls this shit all the time. The answer largely depends on what language you speak. Stanford scientists did experiments on this, by having speakers of various languages watch videos featuring, in various situations, people breaking eggs or popping balloons, sometimes on purpose, sometimes on accident. Will nothing stop his madness?

On Language The Great Language Land Grab By BEN ZIMMER When tech companies engage in legal squabbles about who gets to use our everyday words, what are ordinary speakers of the language to make of it all? March 27, 2011, Sunday ‘Cannot Be Underestimated’ This perplexing turn of phrase is extremely common, even among careful writers and speakers. 6 Badass Tricks You Can (But Shouldn't) Do With Electricity Make a Thunderstorm In Your Microwave Everyone knows that if you put metal in a microwave, fun happens. Awesome, face-burning fun. What many of us don't know is that there are many objects that, when put in a microwave, bring you one step closer to home-brewing your own plasma weapons.

Category:English vulgarities Definition from Wiktionary, the free dictionary » English language » Lexicons » Vulgarities English terms whose tone (rather than the meaning) is offensive to polite company.[edit] The 7 Most Terrifying Rejected TV Ads Speculative ads are commercials which, like mogwai, are momentarily delightful but never intended for general release. Some specs are prepared by ad firms to convince clients their new life insurance mascot should be a woman slathering peanut butter on her knees. Others were forged by the gods to punish humanity for discovering fire. Most, however, are attempts by directors to showcase their talent. All of them are wildly unsafe for most workplaces, because they don't have to please the eleven people at the Parents Television Council bravely taking offense for the rest of us.

LANGUAGE INSTINCT? PINKER Presentations: New College OxfordChrist's College Cambridge [Language Origins Society. University of Pecs, Hungary. 1995] LANGUAGE INSTINCT? Gradualistic Natural Selection is not a good enough explanation Steven Pinker's The Language Instinct was a comprehensive and ambitious attempts to account for the origin of language. 8 Things You Won't Believe Plants Do When No One's Looking Plants don't get a lot of respect, because frankly, they don't do shit. They just kind of sit there waiting to be eaten, right? They can't move or think or make their plans against us. Actually, that's just what they want you to think.

The 6 Most Terrifying Foods in the World Humans are like goats. We'll eat any damned thing. Just ask the people who make PowerBars. 5 Seemingly Harmless Things That Are Stressing You Out #2. The Geomagnetic Field The geomagnetic field is a giant wave of magnetic energy that extends from the Earth's core all the way to space, where it meets the sun's solar wind.

I know words are a powerful thing but I never knew it had so much influence on how we perceive things. by tammster Oct 17