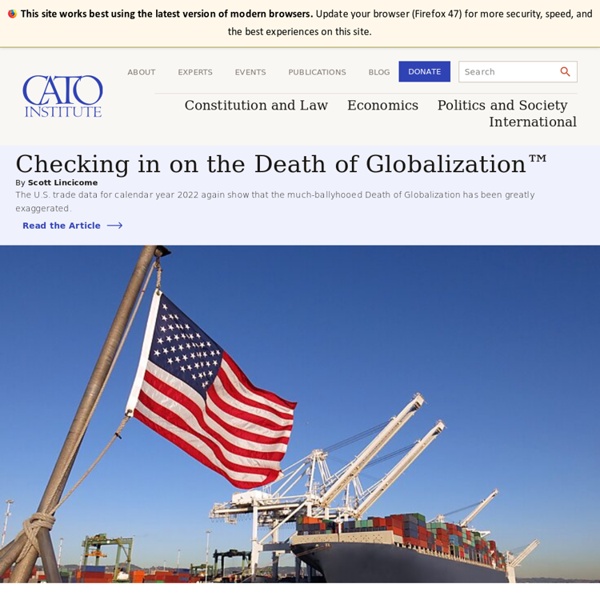 The Cato Institute is pleased to announce that Leszek Balcerowicz, former Deputy Prime Minister and Finance Minister of Poland, will receive the 2014 Milton Friedman Prize for Advancing Liberty, a $250,000 biennial award presented to an individual for achievement in promoting freedom and individual liberty. “Leszek Balcerowicz’s contributions to the advancement of liberty and free markets in Eastern Europe cannot be overstated,” said Cato CEO John A. Allison. “Poland now serves as a model that other countries may follow in transitioning from socialism to a humane economy based on individual responsibility and the rule of law.” The prize will be presented during a dinner at the Waldorf-Astoria Hotel in New York on May 21, 2014. Garry Kasparov, former world chess champion, Russian pro-democracy leader, and global human-rights activist, will deliver the Keynote Address.

Why Scholars Doubt the Traditional Authors of the Gospels Matthew Wade Ferguson The traditional authors of the canonical Gospels—Matthew the tax collector, Mark the attendant of Peter, Luke the attendant of Paul, and John the son of Zebedee—are doubted among the majority of mainstream New Testament scholars. The public is often not familiar, however, with the complex reasons and methodology that scholars use to reach well-supported conclusions about critical issues, such as assessing the authorial traditions for ancient texts. To provide a good overview of the majority opinion about the Gospels, the Oxford Annotated Bible (a compilation of multiple scholars summarizing dominant scholarly trends for the last 150 years) states (p. 1744):

Berghuis v. Thompkins (08-1470) Appealed from the United States Court of Appeals for the Sixth Circuit (Nov. 19, 2008) Oral argument: March 1, 2010 In February of 2001, Southfield, Michigan police officers questioned Van Chester Thompkins (“Thompkins”) for roughly three hours about a shooting that had occurred over one year prior. Strengthening democracy through private enterprise and market oriented reform Sparking Debate on Economic Policy in Nepal Samriddhi wins an award at the Asia Liberty Forum in Kuala Lumpur. By Sarita Sapkota, Samriddhi Hot Policy Wonks For The Democrats: The New Realists Michèle Flournoy hardly seems like a renegade. As president of the Center for a New American Security, she and her colleagues have assigned themselves the modest-sounding mission of coming up with a pragmatic foreign policy platform for the next president. But within the progressive foreign policy establishment, this makes them revolutionaries. “Part of what we’re saying is, let’s have some clear-eyed analysis based on the facts,” said Ms. Flournoy in an interview in her Washington office a few blocks from the White House. “Let’s focus on what works for a while.”

One America News Network American right-wing pay television news channel One America News Network (OANN), also referred to as One America News (OAN), is an American right-wing[1] pay television news channel launched on July 4, 2013 owned by Herring Networks, Inc. The network is headquartered in San Diego, California, and operates a news bureau in Washington, D.C.[2] and New York City. Originally launched with the intention of targeting a conservative and center-right audience,[3][4] OAN states a goal of delivering credible national and international news coverage throughout the day while its prime time political talk shows illustrate a conservative perspective.[5][6][7] According to The Washington Post, the channel has been noted for its pro-Trump coverage.[8] The channel has been noted for promoting falsehoods and conspiracy theories.[9][10]

The FBI, Watergate And Deep Throat - What Really Happened When Nixon Fell The following is excerpted from the new book “Enemies: A History of the FBI” by National Book Award-winner Tim Weiner [Random House, $30.00]: On May 2, 1972, in the darkness before dawn, J. Edgar Hoover died in his sleep. It rained all day as his closed casket lay on a black catafalque in the rotunda of the United States Capitol. Zombie Hasbara: 'World War Z' and Hollywood’s Zionist embrace Zombies rush the wall in World War Z. I went to the Drive-In in Atlanta Friday night, to celebrate a friend’s birthday, a beautiful night under an almost full moon. We watched This is The End and Fast and Furious 6, and two of us stayed for the 2:00 am screening of World War Z. I’m not a zombie fanatic, so other than watching the Walking Dead, I had few expectations beyond the trailers that have been on TV since the Super Bowl. So I was surprised, jarred out of the movie really, when right in the middle of the narrative, Brad Pitt’s character, Gerry Lane, travels to Israel and spends more than 10 minutes in a full-on pro-Israel propaganda piece that was as corny as it was crazy. The Times of Israel may be only slightly exaggerating when it calls this “the greatest piece of cinematic propaganda for Israel since Otto Preminger’s “Exodus.”

Fighting Facebook, a Campaign for a People’s Terms of Service Reuters Facebook is on the defensive again. Members of the social networking site sued the company for co-opting their identities in online ads, and Facebook agreed to revise its “Statement of Rights and Responsibilities” and offer a $20 million settlement. The case has drawn less attention than the dorm disputes portrayed in The Social Network, but the impact is far wider. An underpublicized aspect of the dispute concerns the power of online contracts, and ultimately, whether users or corporations have more control over life online. Similar class action suits have been leveled against the popular photo-sharing application Instagram, and the mother of all platforms, Google. Fed up with the “contracts” these companies force on their customers, some people are finally striking back.

The Corner Fifty years ago this week, the Fall 1968 issue of the quarterly journal The Public Interest hit subscribers’ mailboxes. As its cover declared, it was a special issue dedicated to “The Universities” and the crisis that was then engulfing them. You can find it all online here. Straw man A straw man is a common form of argument and is an informal fallacy based on giving the impression of refuting an opponent's argument, while actually refuting an argument that was not presented by that opponent.[1] One who engages in this fallacy is said to be "attacking a straw man." The typical straw man argument creates the illusion of having completely refuted or defeated an opponent's proposition through the covert replacement of it with a different proposition (i.e., "stand up a straw man") and the subsequent refutation of that false argument ("knock down a straw man") instead of the opponent's proposition.[2][3] This technique has been used throughout history in polemical debate, particularly in arguments about highly charged emotional issues where a fiery "battle" and the defeat of an "enemy" may be more valued than critical thinking or an understanding of both sides of the issue. Origin[edit] Structure[edit] The straw man fallacy occurs in the following pattern of argument:

Cold War II by Noam Chomsky These are exciting days in Washington, as the government directs its energies to the demanding task of "containing Iran" in what Washington Post correspondent Robin Wright, joining others, calls "Cold War II." During Cold War I, the task was to contain two awesome forces. The lesser and more moderate force was "an implacable enemy whose avowed objective is world domination by whatever means and at whatever cost." Hence "if the United States is to survive," it will have to adopt a "repugnant philosophy" and reject "acceptable norms of human conduct" and the "long-standing American concepts of `fair play'" that had been exhibited with such searing clarity in the conquest of the national territory, the Philippines, Haiti and other beneficiaries of "the idealistic new world bent on ending inhumanity," as the newspaper of record describes our noble mission. But at least it was possible to deal with , unlike the fiercer enemy, . And daunting it is.

Declassified CIA Docs: Cheney is a Flagrant Liar The National Security Archive has obtained through a FOIA request newly released CIA documents pertaining to 9/11 . There do not appear to be any great revelations in the release, although one of them further illustrates what a liar former Vice President Dick Cheney is. The fact that the Bush administration, and Dick Cheney in particular, actively promoted the falsehood that Saddam Hussein was somehow tied to al-Qaeda and the attacks of September 11th is at this point uncontroversial. It was a deliberate propaganda campaign to help rally Americans to support a war on Iraq that had already been decided upon. Despite heavy redactions, one of these just-released CIA documents reveal that one day before Cheney’s appearance on Meet the Press, the CIA confirmed in a briefing that was sent to the White House Situation Room that “11 September 2001 hijacker Mohamed Atta did not travel to the Czech Republic on 31 May 2000.” MR.

Kellyanne Conway Has Brutal Takedown Of Comey That You've Got To See - Sarah Palin White House Counselor Kellyanne Conway did not hold back in a complete takedown of former FBI Director James Comey. She said Comey was self-obsessed and chose to utilize his time in the Trump administration to prepare for a book tour, rather than honor the integrity of his position atop the FBI. Speaking on behalf of President Trump and the administration, Conway said, “The president is very confounded that this person is always able to divert the spotlight to him.”