Trump’s War on Terror Has Quickly Become as Barbaric and Savage as He Promised. Where the Drones Strike Data - Google Sheets. President Obama's Super Aggressive Drone War In One Graphic. Earlier this week a U.S. drone mistakenly targeted a wedding convoy in Yemen, killing 14 people. 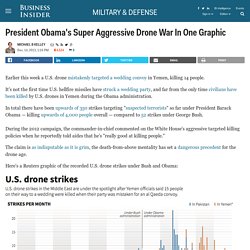 It's not the first time U.S. hellfire missiles have struck a wedding party, and far from the only time civilians have been killed by U.S. drones in Yemen during the Obama administration. In total there have been upwards of 350 strikes targeting "suspected terrorists" so far under President Barack Obama — killing upwards of 4,000 people overall — compared to 52 strikes under George Bush. How Our 1989 Invasion of Panama Explains the Current US Foreign Policy Mess.

The road to Baghdad started in Panama City, 25 years ago. 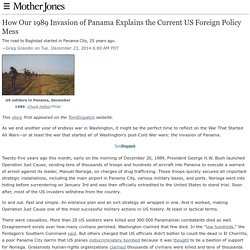 —Greg Grandin on Tue. December 23, 2014 6:00 AM PDT This story first appeared on the TomDispatch website. As we end another year of endless war in Washington, it might be the perfect time to reflect on the War That Started All Wars—or at least the war that started all of Washington's post-Cold War wars: the invasion of Panama. Twenty-five years ago this month, early on the morning of December 20, 1989, President George H.W. The ultimate goal of the NSA is total population control. The Long War Journal - Charts on US Strikes in Pakistan. Since 2004, the US has been conducting a covert program to target and kill al Qaeda and Taliban commanders based in Pakistan's lawless northwest. 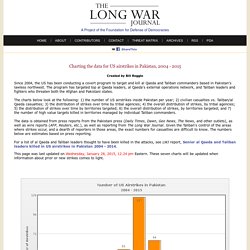 The program has targeted top al Qaeda leaders, al Qaeda's external operations network, and Taliban leaders and fighters who threaten both the Afghan and Pakistani states. The charts below look at the following: 1) the number of US airstrikes inside Pakistan per year; 2) civilian casualties vs. Taliban/al Qaeda casualties; 3) the distribution of strikes over time by tribal agencies; 4) the overall distribution of strikes, by tribal agencies; 5) the distribution of strikes over time by territories targeted; 6) the overall distribution of strikes, by territories targeted; and 7) the number of high value targets killed in territories managed by individual Taliban commanders. This page was last updated on Wednesday, January 28, 2015, 12:24 pm Eastern. These seven charts will be updated when information about prior or new strikes comes to light. Six numbers no one should ever forget about the war in Iraq. On Thursday, President Obama announced that 300 American military advisers would head to Iraq to assist the government in its fight against ISIS rebels. 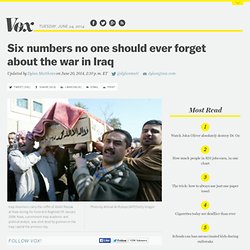 That, Zack Beauchamp argues, could lead to US airstrikes in the country going forward: "The advisers would be deployed to 'joint operation centers' on the ground to coordinate US and Iraqi intelligence on the conflict. Previous reports on Obama's thinking suggested that he had ruled out airstrikes in the near term because of a lack of intelligence about who to bomb. These centers could solve that problem, enabling the US to launch air strikes if and when Obama decides to.

" Secret ‘Kill List’ Tests Obama’s Principles. Striking Al Qaeda - Graphic. Ron Paul schools Bill Oreilly on CIA meddling in Iran. Sixty years of US aid to Pakistan: Get the data. The Obama administration has announced it will withhold more than one-third of all military assistance to Pakistan - an aid envelope worth some $800m (£498m). The withheld aid includes funding for military equipment and reimbursements for selected Pakistani security expenditures - including a payment of $300m for counterinsurgency programmes.

US aid to Pakistan has a long political history and this is not the first time money has been withheld. Here we've pulled out all the figures for both US military aid and economic assistance (including development assistance) to Pakistan between 1948 and 2010. China Releases Dissident Hu Jia From Jail. Apple, America and a Squeezed Middle Class. But as of spoke, interrupted with an inquiry of his own: what would it take to make iPhones in the United States? 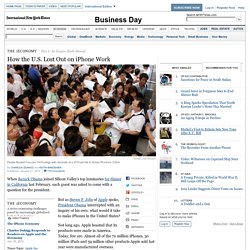 Not long ago, Apple boasted that its products were made in America. Today, few are. Almost all of the 70 million iPhones, 30 million iPads and 59 million other products Apple sold last year were manufactured overseas. Why can’t that work come home? Mr. Mr. The president’s question touched upon a central conviction at Apple. Apple has become one of the best-known, most admired and most imitated companies on earth, in part through an unrelenting mastery of global operations.

However, what has vexed Mr. Apple employs 43,000 people in the United States and 20,000 overseas, a small fraction of the over 400,000 American workers at General Motors in the 1950s, or the hundreds of thousands at General Electric in the 1980s. “If it’s the pinnacle of capitalism, we should be worried.” Apple executives say that going overseas, at this point, is their only option.

‘I Want a Glass Screen’ Why Democracy Is Failing Across The World. As the revolt that started this past winter in Tunisia spread to Egypt, Libya, and beyond, dissidents the world over were looking to the Middle East for inspiration. 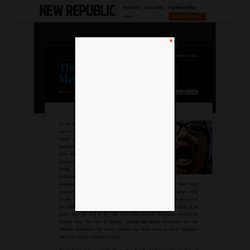 In China, online activists inspired by the Arab Spring called for a “jasmine revolution.” In Singapore, one of the quietest countries in the world, opposition members called for an “orchid evolution” in the run-up to this month’s national elections. Perhaps as a result, those watching from the West have been positively triumphalist in their predictions. The Bin Laden Decade.