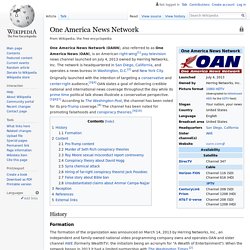 The network is headquartered in San Diego, California, and operates a news bureau in Washington, D.C.[2] and New York City. Originally launched with the intention of targeting a conservative and center-right audience,[3][4] OAN states a goal of delivering credible national and international news coverage throughout the day while its prime time political talk shows illustrate a conservative perspective.[5][6][7] According to The Washington Post, the channel has been noted for its pro-Trump coverage.[8] The channel has been noted for promoting falsehoods and conspiracy theories.[9][10] History Formation Content Pro-Trump content In October 2017, the channel said without any evidence that a "report" had been published which showed "U.K. Syria chemical attack. The Federalist - Culture, Politics, Religion. Conservative news, politics, opinion, breaking news analysis, political cartoons and commentary – Townhall. Washington Examiner: Political News and Analysis About Congress, the President and the Federal Government.

TruePundit.com. AWR Hawkins Podcast - Breitbart. Down Range - Breitbart. PJ Media. The Daily Caller. CNN. 'Common Sense Coalition' sets centrist Senate tone. Senators in the 25-member Common Sense Coalition on Monday said their work in developing a deal to help end the government shutdown shows the road to getting big-ticket items passed in the future needs to run through the middle of both parties, rather than the extremes. 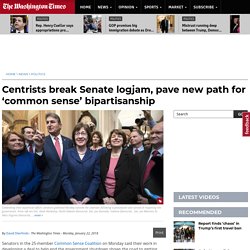 5 Shocking Facts About The Clintons & Haiti You Likely Don’t Know. Everyone remembers when the Clintons (Clinton Foundation) invaded and capitalized on Haiti after the earthquake of 2010, but not everyone is aware of the nefarious acts that have continued for years since. 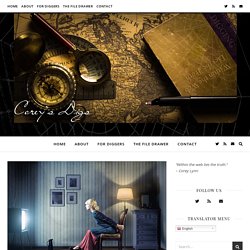 Below is only a taste of the power and control the Bill and Hillary Clinton duo maintain over Haiti. And make no mistake, their power and connections do not cease with Haiti. 1) Most of you are familiar with the Digicel scandal, but did you know that Dennis O’Brien, owner and CEO of Digicel in Haiti, personally travels every 2 months in his private Jet to pick up CASH in U.S. dollars that his cellular monopoly is generating? Do you know where that money goes? The Clinton Foundation is given 10%, and several others in connection with this monopoly are thrown some small bones.

Kellyanne Conway Has Brutal Takedown Of Comey That You've Got To See - Sarah Palin. White House Counselor Kellyanne Conway did not hold back in a complete takedown of former FBI Director James Comey. 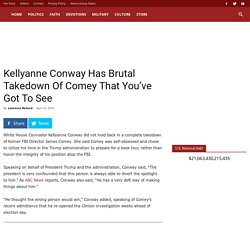 The Mark Levin Show. The Hill - covering Congress, Politics, Political Campaigns and Capitol Hill. Senator Durbin and the Corruption of the English Language. Some choice nonsense from Senator Durbin: Sen. 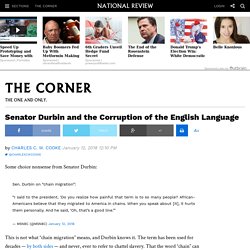 Durbin on “chain migration”:“I said to the president, ‘Do you realize how painful that term is to so many people? African-Americans believe that they migrated to America in chains. Conservative news, politics, opinion, breaking news analysis, political cartoons and commentary – Townhall. National Review. Fighting corruption & promoting transparency in government through public education and use of the Freedom of Information Act.

CREEPS ON A MISSION: Michael Horowitz is Really Investigating the Investigators. Since at least July 2016, the upper echelon of the FBI and the Department of Justice began a stealth operation—with the complicity if not instigation of President Obama—to taint and destroy Candidate Trump with a concocted “Russia collusion” narrative. 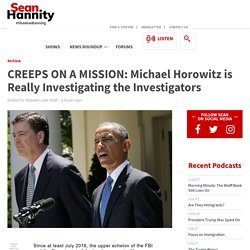 Michael Horowitz, the Inspector General of the Department of Justice, has been running a little-watched parallel investigation that is already producing results—when he is not manipulated or overborn by Robert Mueller. His name is not familiar to most Americans, but Mr. Horowitz has played an important role since President Obama named him Inspector General (IG) for the Department of Justice in 2012. Congress mandated the position of IG for every major federal agency. Exposing and Combating Liberal Media Bias. Fox News - Breaking News Updates. RealClearPolitics - Opinion, News, Analysis, Videos and Polls. Inspector General Investigations. Pacific Pundit - They distort, we deride. About Me - Sara A. Carter. Sara is a thespian who studied with the London Academy of Music and Dramatic Art (LAMDA) and practices foreign accents to embarrass her family in public settings. 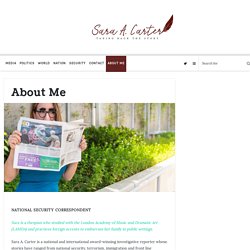 Sara A. Carter is a national and international award-winning investigative reporter whose stories have ranged from national security, terrorism, immigration and front line coverage of the wars in Afghanistan and Iraq. She is currently the senior national security correspondent for web-based Circa News, working on major projects in conjunction with Sinclair Broadcast Group affiliates across the nation. Patriot Retort. Scragged. The Federalist - Culture, Politics, Religion. Q. Res ipsa loquitur ("The thing itself speaks") DB DAILY UPDATE – ENERGY. POLITICS. DAILY. Blog - The Federalist. Why Mueller Didn’t Indict the Russians For Meddling In the Presidential Election. I wrote here about Robert Mueller’s indictment of 13 Russian citizens and three Russian companies. 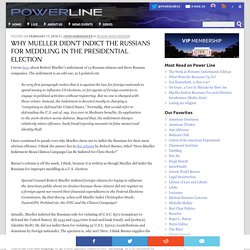 The indictment is an odd one, as I pointed out: Its very first paragraph recites that it is against the law for foreign nationals to spend money to influence US elections, or for agents of foreign countries to engage in political activities without registering. But no one is charged with these crimes. Instead, the indictment is devoted mostly to charging a “conspiracy to defraud the United States.” EVIDENCE: FBI & DOJ Used Russian Organized Crime Figures to Dig Dirt on Trump for Steele Dossier. The Obama Government’s Secret Societies. Major League Baseball Stats. Mueller’s Fruit of the Poisonous Tree. 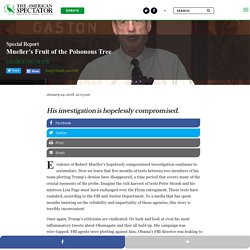 Now we learn that five months of texts between two members of his team plotting Trump’s demise have disappeared, a time period that covers many of the crucial moments of the probe. Imagine the rich harvest of texts Peter Strzok and his mistress Lisa Page must have exchanged over the Flynn entrapment. Those texts have vanished, according to the FBI and Justice Department. To a media that has spent months insisting on the reliability and impartiality of those agencies, this story is terribly inconvenient. Once again, Trump’s criticisms are vindicated. Financial and Business News - Investor's Business Daily. CONFIRMED: Inspector General Can Seize Strzok and Page's FBI Phone Records. Patriot's Corner. New York Post. Inside Politics. Politics, Political News. The New York Times - Breaking News, World News & Multimedia. 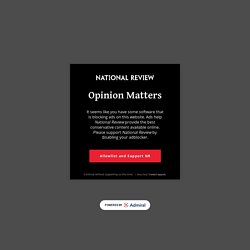 As its cover declared, it was a special issue dedicated to “The Universities” and the crisis that was then engulfing them. You can find it all online here. The Political Insider - Impart. Endingthefed.com. Truthfeed - Truth Worth Spreading. A Med History EWS Current Version.docm. Twitter.