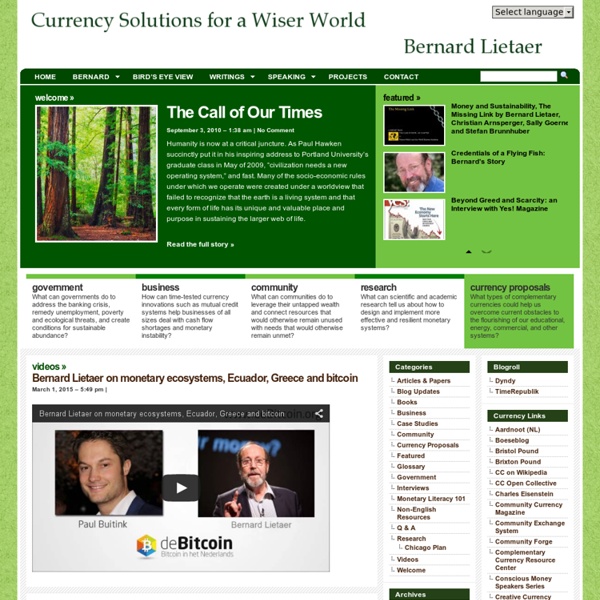 Books , Interviews , Videos » Bernard Lietaer and Jacqui Dunne promoting “Rethinking Money” at The Big Picture show on RT with Thom Hartmann Rethinking Money points out that there is a way, in fact a thousand ways, to stop our current juggernaut towards global self-destruction. There is a system of solutions already in place in localities throughout the world where terrible problems have existed. The changes came about, not through the redistribution of wealth, increased conventional taxation, bond measures or enlightened self-interest from corporate entities, but rather, by people simply rethinking the concept of money. With that restructuring, everything changed.

Freiwirtschaft Freiwirtschaft (German for free economy) is an economic idea founded by Silvio Gesell in 1916. He called it Natürliche Wirtschaftsordnung (natural economic order). In 1932, a group of Swiss businessmen used his ideas to found WIR Bank (WIR). Structure[edit] Stephen R. Covey Choosing Not to be Angry May 4th, 2010 I was teaching the 7 Habits at a professional gathering last week when I experienced something remarkable. While I spoke about Habit 1, Be Proactive, and some of the principles for being responsible for your own life or carrying your own weather and choosing your own response, a gentleman from the audience stood up. Right […] Launched My Blog on Huffington Post—“Our Children and the Crisis in Education”

Saving Economics from the Economists Economics as currently presented in textbooks and taught in the classroom does not have much to do with business management, and still less with entrepreneurship. The degree to which economics is isolated from the ordinary business of life is extraordinary and unfortunate. That was not the case in the past. Local exchange trading system A local exchange trading system (also local employment and trading system or local energy transfer system; abbreviated to LETS or LETSystem) is a locally initiated, democratically organised, not-for-profit community enterprise that provides a community information service and record transactions of members exchanging goods and services by using the currency of locally created LETS Credits.[1] History[edit] Michael Linton originated the term "local exchange trading system" in 1983 and for a time ran the Comox Valley LETSystems in Courtenay, British Columbia.[2] The system he designed was intended as an adjunct to the national currency, rather than a replacement for it,[3] although there are examples of individuals who have managed to replace their use of national currency through inventive usage of LETS.[citation needed]

Gary Hamel’s Management 2.0 In my previous post, I introduced you to Drew Williams. For seven years Drew served as assistant vicar at St. Andrews, an Anglican parish in Chorleywood, England. When he arrived in 2003, Drew found a church that was big but not growing, and a congregation that was loyal but not energized. Mark Stibbe, head vicar at St. Andrews, challenged Drew to develop a plan that would change this. Gar Alperovitz: The Rise of the New Economy Movement As our political system sputters, a wave of innovative thinking and bold experimentation is quietly sweeping away outmoded economic models. In ‘New Economic Visions’, a special five-part AlterNet series edited by Economics Editor Lynn Parramore in partnership with political economist Gar Alperovitz of the Democracy Collaborative, creative thinkers come together to explore the exciting ideas and projects that are shaping the philosophical and political vision of the movement that could take our economy back. Just beneath the surface of traditional media attention, something vital has been gathering force and is about to explode into public consciousness. The “New Economy Movement” is a far-ranging coming together of organizations, projects, activists, theorists and ordinary citizens committed to rebuilding the American political-economic system from the ground up. Explosion of Energy The movement is also serious about building on earlier models.

OECD – Your Better Life Index Average personal index for Germany, men, 15–24 How’s life? There is more to life than the cold numbers of GDP and economic statistics – This Index allows you to compare well-being across countries, based on 11 topics the OECD has identified as essential, in the areas of material living conditions and quality of life. Download executive summary Download the index data Learn more about the index Better Life BlogArchive Happiness pays

Gar Alperovitz: Systemic Crisis, Politics as Usual Gar Alperovitz is the Lionel R. Bauman Professor of Political Economy at the University of Maryland and is a former Fellow of Kings College, Cambridge University; Harvard’s Institute of Politics; the Institute for Policy Studies; and a Guest Scholar at the Brookings Institution. Gar Alperovitz presents at a Seattle Town Hall on Oct 3, 2012 immediately after a public screening of the presidential debate between Romney and Obama.