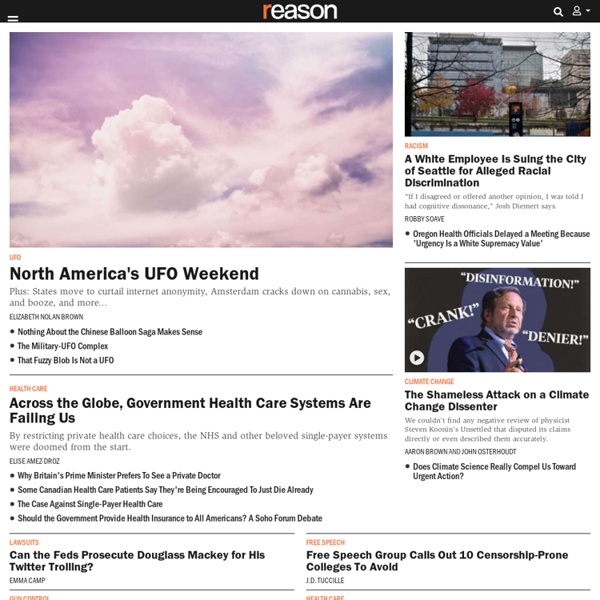 Cato @ Liberty Nuclear negotiations with Iran continue in Vienna. Skeptics remain many: everything depends on whether the ruling elite, and not just President Hassan Rouhani, is serious about reform. Iran should demonstrate its commitment by respecting religious liberty. The most celebrated case of persecution today is Saeed Abedini, an American citizen born in Iran and sentenced to eight years in prison last year for “undermining national security” by the Iranian government.

Anarcho-Capitalism: So Crazy, It Just Might Work! George Mason University economist, and advocate of anarcho-capitalism, Bryan Caplan explains why details of the ideological history of human attitudes toward methods and techniques of government show that ideas that almost everyone dismisses offhand as nutty and impossible can and in fact have come to dominate our political culture. I mean, you think anarcho-capitalism is crazy? Imagine how people used to react to democracy? Let Caplan explain: Imagine advocating democracy a thousand years ago. You sketch your basic idea: "Every few years we'll have a free election.

Declaration Entertainment Back in the summer of 2010, Declaration Entertainment asked for your support to help make the movies you want to see. Now needless to say, feature films are expensive propositions, and despite the fact that we had next to nothing on the shelves when we opened the doors, you took a chance on us and parted with your hard-earned money to support that critical cause: namely, reclaiming the mythology of the country; recasting us and our principles as heroes rather than villains; and dealing with the issues that the liberals in Hollywood will not only not touch, but actively squash at every opportunity. As we gathered funds for the first year and a half, we stayed in the fight as economically as possible: by producing the FIREWALL segments. There are thirty-two of them, at present, including EAT THE RICH, WHY WE SUCK, and the remarkable WHAT WE BELIEVE series. Then, Jeremy strapped on his directing six-guns, and on a very tight budget managed to shoot a remarkable feature film: THE ARROYO.

Radio Free Asia Press Room | About | Contact Cambodia Opposition Deputy Leader Vows Party ‘Won’t Betray the People’ Kem Sokha says the CNRP will stand firm in negotiations with the ruling party. Gnu Privacy Guard (GnuPG) Mini Howto (English): Concepts Next Previous Contents 1. Concepts Hit & Run : Reason Magazine PwCWith tax season upon us, if you were a foreign business owner regarding all of this scurrying around to file forms and pay the United States government its take, would you consider the activity as relatively attractive compared to the alternatives? Or would you consider it a turnoff? To judge by rankings released last year by the consulting firm PricewaterhouseCoopers (you can call it PwC), businesses may venture into the Land of the Free for market opportunities, but that may well be despite a pretty uncompetitive tax regime. The U.S. ranks 64 out of 189 for ease of paying taxes, has a total tax rate that's above average and, importantly, barely seems to be trying to compete with other countries that Americans once mocked as overtaxed and overgoverned. According to PwC, "Paying Taxes 2014 looks not only at corporate income tax, but at all of the taxes and mandatory contributions that a domestic medium-size case study company must pay. PwC

The pros and cons of newspaper paywalls: a Twitter debate Debates over newspaper paywalls break out all the time, but not all of them involve a former Dow Jones chief executive, a former Wall Street Journal publisher, the current head of the Wall Street Journal‘s digital arm, the president of BuzzFeed and media writers for Bloomberg and All Things Digital. Just such a debate broke out on Sunday, however, and you can check out an edited version of it below (or there’s also a Storify version.) I started things off with a critical tweet about a Bloomberg story by Edmund Lee on how the New York Times paywall was working “better than anyone had guessed,” which I contrasted with a post of mine about the decline in traffic to the NYT site (as measured by comScore) and what appeared to be a corresponding decline in advertising revenue — including digital revenue. Edmund responded that his story said circulation revenue has made up for the shortfall in ad revenue. . ...

Blog: 100 Websites You Should Know and Use Entertainment Meet David Peterson, who developed Dothraki for Game of Thrones There are seven different words in Dothraki for striking another person with a sword. Among them: “hliziﬁkh,” a wild but powerful strike; “hrakkarikh,”a quick and accurate strike; and “gezrikh,” a fake-out or decoy strike. But you won’t find these words in George R. R.