Com.instranet. Microcredit for Macro Gains by United Nations Development Programme. Learning Brief 4 - Making the case for policy change and financing for Ecosystem-based Adaptation. This brief is part of a series of learning briefs produced by UNDP. 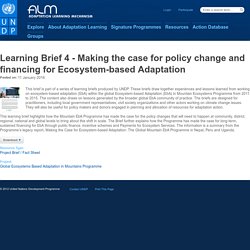 These briefs draw together experiences and lessons learned from working on ecosystem-based adaptation (EbA) within the global Ecosystem-based Adaptation (EbA) in Mountain Ecosystems Programme from 2011 to 2015. The content also draws on lessons generated by the broader global EbA community of practice. The briefs are designed for practitioners, including local government representatives, civil society organizations and other actors working on climate change issues. Learning Brief 3 - Making the economic case for Ecosystem-based Adaptation. 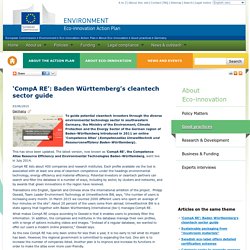 The latest version, now known as ‘CompA RE’, the Competence Atlas Resource Efficiency and Environmental Technologies Baden-Württemberg, went live in July 2014. CompA RE lists about 400 companies and research institutes. Each profile available via the tool is associated with at least one area of cleantech competence under the headings environmental technology, energy efficiency and material efficiency. European Forum on Eco-innovation: environmental labelling, information and management schemes are central to the circular economy - Eco-innovation Action Plan. “Eco-innovation is a crucial factor for delivering the transition to a more circular economy,” said Antti Ilmari Peltomaki, Deputy Director-General at the Commission’s Directorate-General for Internal Market, Industry, Entrepreneurship and SMEs. 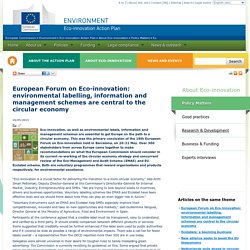 “We are trying to look beyond waste to incentives, drivers and business opportunities. Voluntary labelling schemes like EMAS and Ecolabel have been effective tools and we should think about how they can play an even bigger role in future.” “Voluntary instruments such as EMAS and Ecolabel help SMEs especially improve their competitiveness, innovate and take on new opportunities and markets,” said Guillermina Yanguas, Director General at the Ministry of Agriculture, Food and Environment in Spain. 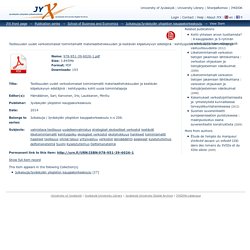 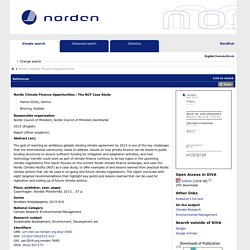 Green ProcA. Health in the Green Economy. Tekaisu – Opasnet Suomi. Of Time Machines and Foresight Garages: About the September-October FUTURIST. One of the most frequently asked questions here at the World Future Society is How do I become a futurist? 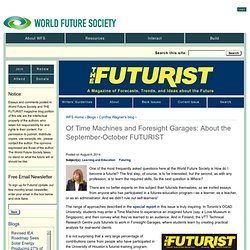 The first step, of course, is to be interested, but the second, as with any profession, is to learn the required skills. So the next question is Where? There are no better experts on this subject than futurists themselves, so we invited essays from anyone who has participated in a futures-education program—as a learner, as a teacher, or as an administrator. TheNewClimateEconomyReport.pdf. Mmuting by car is bad for your mental health, but cycling is good. Researchers have discovered that commuting by car has a damaging effect on a driver’s mental health. 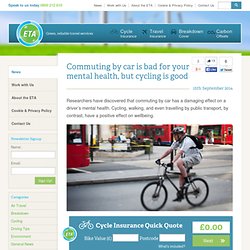 Cycling, walking, and even travelling by public transport, by contrast, have a positive effect on wellbeing. A study by Norwich medical school of over 17,000 commuters and 18 years of data found that car commuters were at least 13 per cent more likely to feel constantly under strain or unable to concentrate” than those who cycled or walked to work. The longer drivers spent on their daily commute, the worse their psychological wellbeing.

Why is flying cheaper than getting the train? If you've ever tried to book a long weekend in London, or a trip to Paris or cornwall, or... really anywhere, it probably didn’t escaped your notice that flying is very often the cheapest way to get to your chosen destination. 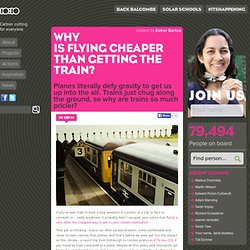 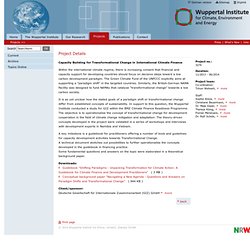 The Green Climate Fund of the UNFCCC explicitly aims at supporting a "paradigm shift" in the targeted countries. Similarly, the British-German NAMA Facility was designed to fund NAMAs that catalyse "transformational change" towards a low carbon society. UNEP Launches Green Economy Toolkit for Policymakers. 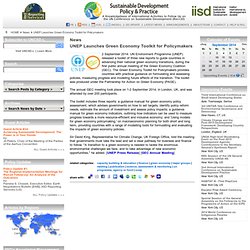 The Green Economy Toolkit for Policymakers provides countries with practical guidance on formulating and assessing policies, measuring progress and modeling future effects of the transition. The toolkit was produced under the Partnership for Action on Green Economy (PAGE). The annual GEC meeting took place on 1-2 September 2014, in London, UK, and was attended by over 200 participants. Sir David King, Representative for Climate Change, UK Foreign Office, told the meeting that governments must take the lead and set a clear pathway for business and finance to follow.

"A transition to a green economy is needed to tackle the enormous environmental challenges we face, and to take advantage of new economic opportunities," he added. Toolbox-zur-Nachhaltigen-Auftragsvergabe-EN.pdf. GGBP Assesses Green Growth Best Practices. 4 March 2014: The Green Growth Best Practice (GGBP) initiative released a ‘Synthesis of Key Findings,' a global assessment of best practice in green growth planning and implementation.

The report outlines actions that enable successful green growth policies, with a focus on policies that simultaneously address climate protection and resilience and economic and social development. GGBP is run by the Global Green Growth Institute (GGGI) with support from other funders and partners. The report presents analysis from 60 government programmes from around the world that demonstrate green growth's contribution to the achievement of a green economy and sustainable development. Green Growth Knowledge Platform. Global Climate Risk Index 2014. The Global Climate Risk Index 2014 analyses to what extent countries have been affected by the impacts of weather-related loss events (storms, floods, heat waves etc.). The most recent data available—from 2012 and 1993–2012—were taken into account.

The countries affected most in 2012 were Haiti, the Philippines and Pakistan. For the period from 1993 to 2012 Honduras, Myanmar and Haiti rank highest. This year's 9th edition of the analysis reconfirms that according to the Climate Risk Index less developed countries are generally more affected than industrialised countries. Regarding future climate change, the Climate Risk Index may serve as a red flag for already existing vulnerability that may further increase in regions, where extreme events will become more frequent or more severe due to climate change. Verkkokauppa. Commission on the Economy and Climate. Sähköautolaskuri. Ten things to know about climate finance in 2012. The Conference of the Parties to the UNFCCC is the largest event of the year for those working on climate change. This year attention turns to Qatar, the host of the 18th of these major conferences. Once again, the hot topic will be how to finance developing-country efforts to respond to climate change. 2013 marks the end of the 'Fast-Start Finance (FSF)' period, during which developed countries committed to deliver $30 billion of ‘new and additional’ finance to help countries take immediate action on mitigation and adaptation.

There will be much discussion on how this finance has been used, and how to mobilize more finance, in Doha. To inform this debate, we highlight the ten most noteworthy insights from our efforts over the past year to monitor climate finance on Climate Funds Update (CFU). Governments promised to find $30 billion of Fast Start Finance (FSF). Ecological Economics - Global governance for sustainable energy: The contribution of a global public goods approach. Volume 83, November 2012, Pages 11–18 Sustainability in Global Product Chains.

BCGE A4.pdf (application/pdf-tiedosto) From Rio to Rio - A 20-Year Journey to Green the World's Economies. This book provides a succinct, readable, and engaging narrative and analysis of the 20 year history of GEF projects. Global Green Growth Institute. Public Administration and Development - Volume 32, Issue 3 - PUBLIC ADMINISTRATION AND SUSTAINABILITY: THE ROLE OF PUBLIC INSTITUTIONS IN CREATING A SUSTAINABLE FUTURE. Green economy: an analysis of the UNCSD submissions. The Green Economy Pocketbook; the case for action. A green economy is about a different way of doing things. Voices from Europe. Can Market Forces Really be Employed to Address Climate Change. Debate continues in the United States, Europe, and throughout the world about whether the forces of the marketplace can be harnessed in the interest of environmental protection, in particular, to address the threat of global climate change.

In an essay that appears in the Spring 2012 issue of Daedalus, the journal of the American Academy of Arts and Sciences, Prof. New Balance Sheet for Nations Launch of Sustainability Index that Looks Beyond GDP. World Economic and Social Survey. Green_economy_english_final.pdf (application/pdf-tiedosto) Green_growth_full.pdf (application/pdf-tiedosto) Costs of Inaction. ‘Inclusive green growth’ – a review. Simon Maxwell, CDKN’s Executive Chairman, responds to the new World Bank policy paper on ‘Inclusive Green Growth’ in this review essay. Simon Maxwell congratulates the authors of the World Bank paper, Marianne Fay, Stephane Hallegatte and their collaborators, on what he calls a “wide-ranging, analytical [paper], rich in examples, and practical. To my mind, there are few people working in environment or development who would not benefit from a careful reading of this text.