Transmission (The Invasion ChroniclesBook One): A Science Fiction Thriller – B&N Readouts. Kevin was pretty sure you shouldn’t be told you were dying when you were thirteen. 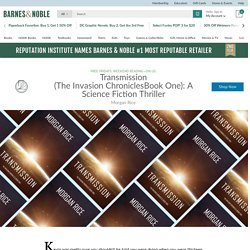 There probably wasn’t a good time to be told it, to be fair, but definitely not when you were thirteen. “Kevin,” Dr. Markham said, leaning forward in his chair, “do you understand what I’m saying to you? Do you have any questions? Do you, Ms. Kevin looked over to his mom, hoping she would have more of an idea what to say next than he did. Right now, she looked as though she was trying to hold back tears. We are going to be reviewing a ton of new e-readers soon. How Many Cookies Will It Take to Make Me Happy? - Daily Inner-Journal Guided Workshop for Licking Sugar Addiction, Disorderly and Secret Eating eBook: Elizabeth Bohorquez RN. Sharp Objects by Gillian Flynn. Culture - Ten books to read in July. The Riemann Hypothesis: A Million Dollar Problem. Informal fallacy - Recherche Google. Straw man. A straw man is a common form of argument and is an informal fallacy based on giving the impression of refuting an opponent's argument, while actually refuting an argument that was not presented by that opponent.[1] One who engages in this fallacy is said to be "attacking a straw man. 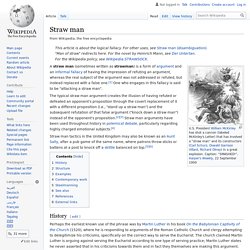 " The typical straw man argument creates the illusion of having completely refuted or defeated an opponent's proposition through the covert replacement of it with a different proposition (i.e., "stand up a straw man") and the subsequent refutation of that false argument ("knock down a straw man") instead of the opponent's proposition.[2][3] This technique has been used throughout history in polemical debate, particularly in arguments about highly charged emotional issues where a fiery "battle" and the defeat of an "enemy" may be more valued than critical thinking or an understanding of both sides of the issue. Origin[edit] Structure[edit] Amazon. The FBI, Watergate And Deep Throat - What Really Happened When Nixon Fell. The following is excerpted from the new book “Enemies: A History of the FBI” by National Book Award-winner Tim Weiner [Random House, $30.00]: On May 2, 1972, in the darkness before dawn, J. 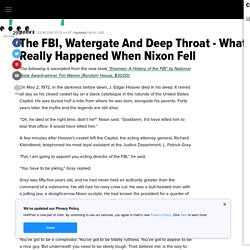 Edgar Hoover died in his sleep. It rained all day as his closed casket lay on a black catafalque in the rotunda of the United States Capitol. He was buried half a mile from where he was born, alongside his parents. Forty years later, the myths and the legends are still alive. “Oh, he died at the right time, didn’t he?” A few minutes after Hoover’s casket left the Capitol, the acting attorney general, Richard Kleindienst, telephoned his most loyal assistant at the Justice Department, L.

Turn Left on Main Street. Individual Liberty, Free Markets, and Peace. Shorenstein Center - Why Scholars Doubt the Traditional Authors of the Gospels. Matthew Wade Ferguson The traditional authors of the canonical Gospels—Matthew the tax collector, Mark the attendant of Peter, Luke the attendant of Paul, and John the son of Zebedee—are doubted among the majority of mainstream New Testament scholars. 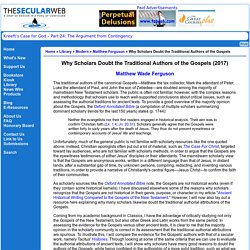 The public is often not familiar, however, with the complex reasons and methodology that scholars use to reach well-supported conclusions about critical issues, such as assessing the authorial traditions for ancient texts. To provide a good overview of the majority opinion about the Gospels, the Oxford Annotated Bible (a compilation of multiple scholars summarizing dominant scholarly trends for the last 150 years) states (p. 1744): Neither the evangelists nor their first readers engaged in historical analysis.

Their aim was to confirm Christian faith (Lk. 1.4; Jn. 20.31). As scholarly sources like the Oxford Annotated Bible note, the Gospels are not historical works (even if they contain some historical kernels). Internal Evidence. FindingDulcinea. The Pharaoh Key – Hachette Book Group. Skeptic » Reading Room » Honor, Dignity, Victim A Tale of Three Moral Cultures. The President is Missing by Bill Clinton and James Patterson. The Year of Less by Cait Flanders - HayHouse. Donald Trump, Stephen Bannon and the Coming Crisis in American National Life. During the 1990s, two amateur historians, Neil Howe and the late William Strauss, developed a new theory of American history in two books, Generations: the History of America’s Future (1991), and The Fourth Turning: An American Prophecy (1997). 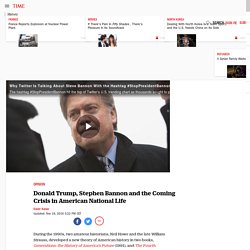 They identified an 80-year cycle in American history, punctuated by great crises that destroyed an old order and created a new one. Though their theory is not widely taught in colleges or discussed in the media, Strauss and Howe may well play a major role in Donald Trump's administration. Stephen Bannon, the former head of Breitbart News who has been appointed Trump’s chief strategist in the White House, is very familiar with Strauss and Howe’s theory of crisis, and has been thinking about how to use it to achieve particular goals for quite a while. THE TIME IT IS TODAY – RICH PASCHALL. The Moral Bucket List. Photo ABOUT once a month I run across a person who radiates an inner light. 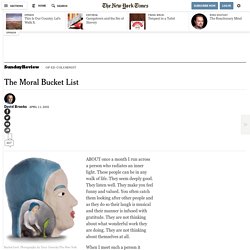 These people can be in any walk of life. They seem deeply good. They listen well. They make you feel funny and valued. When I meet such a person it brightens my whole day. Adult Siblings May Hold The Secret To A Happy Life. Katherine Streeter for NPR Somehow we're squeezing 16 people into our apartment for Thanksgiving this year, with relatives ranging in age from my 30-year-old nephew to my 90-year-old mother. 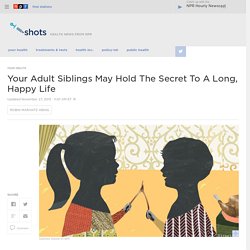 I love them all, but in a way the one I know best is the middle-aged man across the table whose blue eyes look just like mine: my younger brother Paul. Audiobooks.